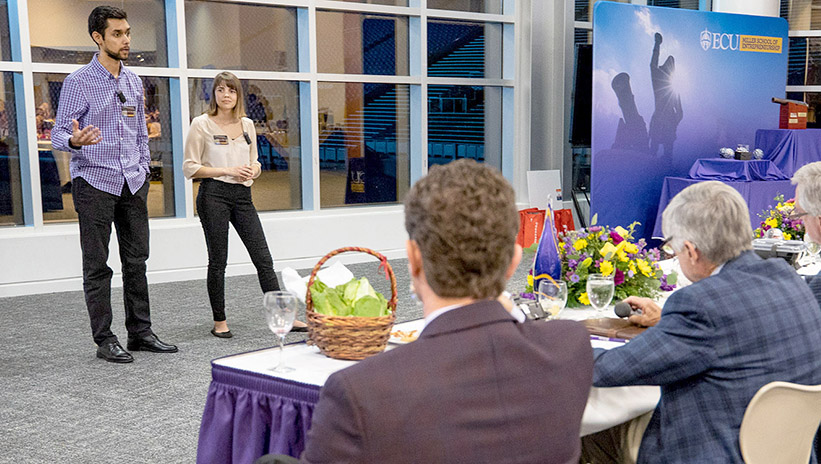 The final round of the 2019-20 Pirate Entrepreneurship Challenge concluded Wednesday night with FishingLicense.us taking first place and a cash prize of $15,000.

FishingLicense.us is the team of ECU biology graduate major Mallory Miles and her software developer husband, Felipe de Araujo. The online company streamlines the process of registering for a fishing license with the goal of making outdoor recreation more accessible to everyone. FishingLicense.us is currently operating in Florida.

"Felipe is an entrepreneur, and his dream is to have a successful business," said Miles. "My dream is to impact conservation, and I'm excited we have a chance to make both of our dreams come true."

Serial entrepreneur Ryan Butcher mentored FishingLicense.us, which plans to use the winnings to continue building out the company's software platform.

Other winners of the third Pirate Challenge included Snap Slimes, which won second place and $10,000. HonestBlox came in third place and will take home $5,000. LightsOut took fourth place and a check for $1,000. 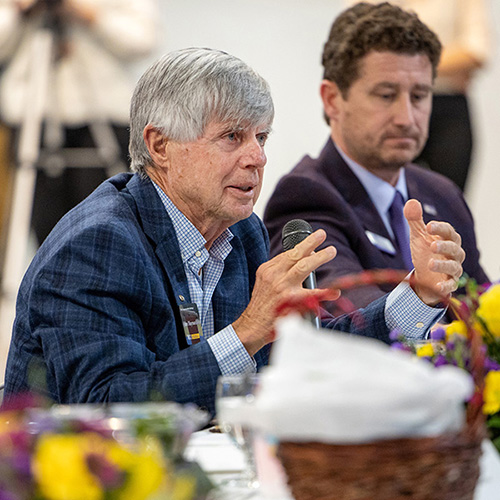 Golden Corral founder James Maynard served as a judge for the final round of the third Pirate Entrepreneurship Challenge.
Now in its third year, the Pirate Challenge is the signature pitch competition of ECU's College of Business (COB) and its Miller School of Entrepreneurship, with $100,000 in cash prizes and in-kind services awarded to teams that placed in the competition. According to Miller School officials, the year's prize winnings make the challenge the richest entrepreneurship pitch competition in North Carolina.

"This year's finals were validation that the entrepreneurial spirit is still spreading across campus and the ECU community," said Dr. Mike Harris, Miller School director. "We helped a biology major and her entrepreneurial husband realize a dream, and that's what we're all about."

Judges for this year's Pirate Challenge are entrepreneurs and ECU alumni whose influences have been felt at the national and local levels. They included:


As a Pirate Challenge judge for the first time, Miller was excited to see the young entrepreneurs getting their start, and he was impressed with how well they prepared.

"It was very hard to find a winner," said Miller. "There were six great presentations and ideas."

Miller also had sage words of wisdom for those student teams that did not walk away with awards during the challenge. 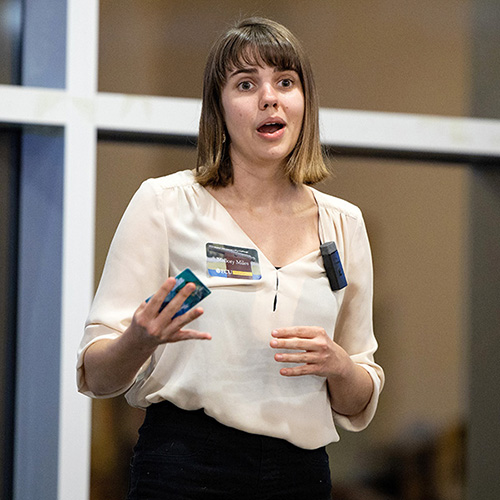 Miles outlines to PEC judges how FishingLicense.us will operate and increase conservation awareness.
"As entrepreneurs, you're going to face a lot of adversity," he said. "You're not going to get what you want when you want it. It's times like this when you go out there and try your best, and if you don't win, those are the times you learn your lesson and get better and stronger."

This year's Pirate Challenge kicked off in October with more than 120 student teams participating in the first round. Those teams represented 11 schools and colleges and 50 academic programs.

This year's Pirate Challenge also included sponsors who will provide in-kind services to the winners. Those sponsors are:


The Thomas Harriot College of Arts and Sciences, which is represented by the winning team, was awarded the Challenge Cannon trophy to be housed in its college until next year's Pirate Challenge. Interim Chancellor Dr. Ron Mitchelson accepted the award on the winning college's behalf.