East Carolina Powers Past Pitt and Towson for Doubleheader Sweep | Beaufort County Now | East Carolina capped off an undefeated weekend and Pirate Invitational Sunday with a doubleheader sweep of Pittsburgh and Towson inside the ECU Softball Stadium.

East Carolina Powers Past Pitt and Towson for Doubleheader Sweep 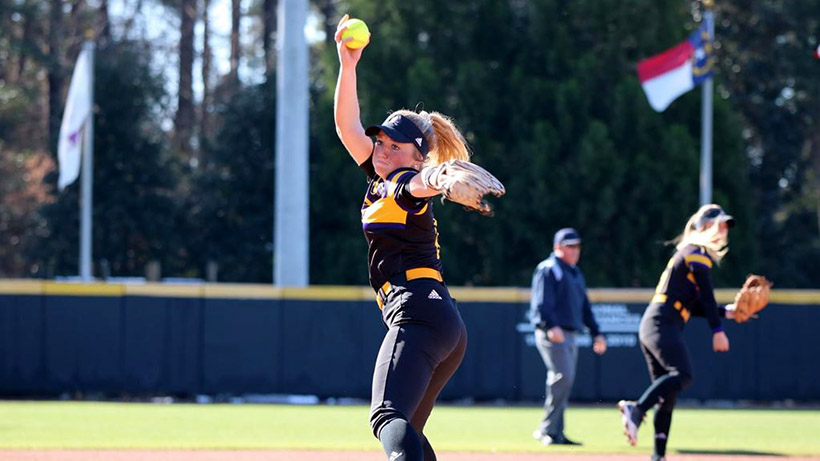 GREENVILLE, N.C.     East Carolina capped off an undefeated weekend and Pirate Invitational Sunday with a doubleheader sweep of Pittsburgh and Towson inside the ECU Softball Stadium. The Pirates run ruled the Panthers 9-1 in five innings before rallying for a 6-5 eight-inning victory over the Tigers in the second contest.

ECU improved to 8-5 and has won four consecutive games. Conversely, Pitt dropped to 5-7 and Towson dipped to 4-5.

Game One     After a scoreless first inning, East Carolina jumped on top of Pittsburgh in the bottom of the second. Sophomore infielder Bailey Ledvina led off the frame with a double and advanced to third on a wild pitch. Freshman Logyn Estes then drilled a 3-2 pitch over the wall in left center to give the Pirates an early 2-0 advantage.

ECU kept the offense flowing in the bottom of the third. With one out, junior infielder Ashleigh Inae singled through the right side and Ledvina followed with a single to left field. Estes then stepped up and lined a 3-1 offering to left field that cleared the fence for her second long ball of the day to put East Carolina on top by a 5-0 margin.

The Pirates made it 7-0 in the bottom of the fourth when senior outfielder Olivia Narron led off with a single and redshirt senior utility Rachel McCollum homered off of the scoreboard. Redshirt senior infielder Tate McClellan ripped her first home run of the campaign off of the batter's eye in center to push the score to 8-0 and Estes posted her third hit of the game - a RBI double - to cap the ECU scoring and leave the home team with a 9-0 lead.

The Panthers would score a consolation run of the unearned variety in the top of the fifth but could not find the additionally tally to keep the game going.

Estes (4-0) did it all in the contest, tossing a complete game in the circle and recording a career-high six RBI in a 3-for-3 performance at the plate. She scattered three hits and allowed just one unearned run while walking two batters and striking out four. Ledvina went 2-for-3 with two runs scored and McCollum drove in a pair of runs herself. Taegen Lewellen rapped out a base hit and notched Pittsburgh's lone RBI.

Becca Miller (0-5) was tagged with the loss, surrendering five runs (all earned) on six hits with three walks and three strikeouts in 2.1 innings of work.

Game Two     An error in the top of the first allowed Towson to grab an early 1-0 edge before McClellan responded in the home half with a RBI single to leave the score knotted at one after an inning. Following a scoreless second, the Tigers retook the lead in the top of the third. Nicole Kidweiler led off with an infield single and Jaclyn Mounie was hit by a pitch. Madison Wilson then laid down a bunt single to load the bases with no outs. Julia Smith-Harrington followed with a dribbler up the middle that scored Kidwiler. Pirate starter Kama Woodall was able to settle things down after that, retiring the next two batters to keep the damage to just one.

East Carolina answered with a pair of runs in the bottom of the third to claim the upper hand for the first time. Narron was hit by a pitch and stole second before McCollum singled to left field. With the runners at second and third and one out on the board, junior infielder Chandley Garner plated them both with a two-run single that put the Pirates on top, 3-2.

ECU held Towson off until the top of the sixth when a Kidwiler RBI groundout with the bases loaded knotted the proceedings at three.

The Tigers had a great chance to pull ahead in the top of the seventh. With one out, Smith-Harrington singled through the left side and Jessica Swistock singled up the middle. Estes entered the circle looking to quell the threat and she did just that. After a walk loaded the bases, Estes induced a force out play to home and a pop up to second to erase the visitors in the frame and preserve the tie.

Under the international tiebreaker rule, Towson struck for two runs via a two-out, two-run single off the bat of Wilson. With things looking dire for ECU in its first extra-inning affair of the campaign, the Pirates put together a stirring rally in the home half.

With McCollum placed at second, Garner took a 3-1 pitch and belted it far over the wall in left field to tie things at five. McClellan then stepped up and worked a 3-2 count before completing the comeback with a towering walkoff solo blast into the trees in left center.

Garner and McClellan combined for four hits and six RBI in the game while McCollum scored three runs and chipped in with two hits. Kidwiler paced the visitors with three hits, two runs scored and a RBI.

Estes (5-0) captured her second win of the day in relief, throwing the final 1.2 innings. She allowed just one earned run and one hit. Smith-Harrington (2-1) was defeated in the circle for the first time this season as East Carolina touched her up for six runs (five earned) on seven hits with three walks and three strikeouts in seven innings. She entered the contest having not surrendered an earned run in 15 innings to start the season.

Up Next: ECU returns to action next weekend (Feb. 28-March 1) at the Liberty Softball Classic in Lynchburg, Va.
Go Back