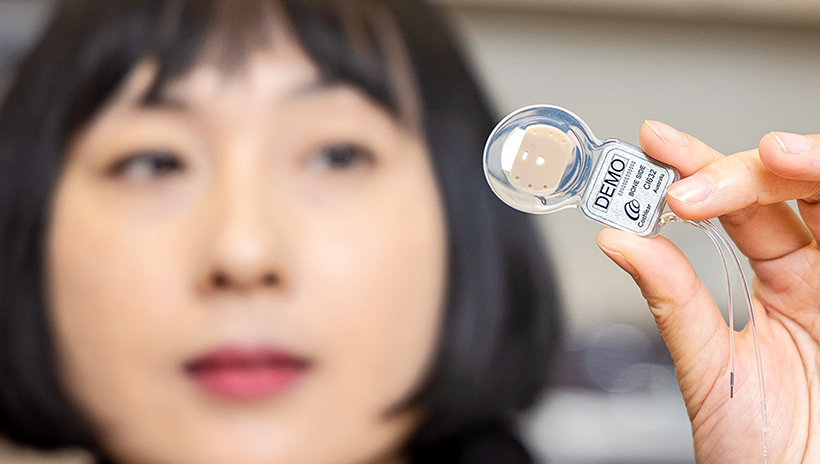 While the average person takes a keyboard's sound for granted, Ning Zhou, an associate professor in the Department of Communication Sciences and Disorders, helps those suffering from hearing loss rediscover the harmonious melody of the world around them.

Zhou, who joined the College of Allied Health Sciences in 2013, was named the university's Five-Year Achievement for Research & Creative Activity Award winner for her work with patients suffering from hearing loss. Her research tests the effectiveness of cochlear implants and how it might depend on the condition a patient's auditory nerve.

Hearing-loss patients have used cochlear implants for more than 40 years to replicate ear function. While technological improvements have reached a plateau, Zhou's research takes a different approach to determining how well an implant performs for a patient.

"Because there is no input from the ear going into the brain, the auditory nerve can degenerate and lose its function," Zhou said. "Our lab looks at how we might measure the effect of degeneration of the auditory nerve using behavioral tests. As the nerve degenerates, we believe it influences the effectiveness of the implant and how well a patient hears because of reduced nerve function."


The subtleties of sound

Zhou's lab takes a unique approach to measuring how well a patient's implant is working, using psychophysical - how a patient perceives the world around them - techniques to scrutinize auditory nerve response.

"We still do not have a full understanding of how the implant's electrical stimulation works and how it interacts with an auditory nerve that's losing its function," she said. "We design experiments to test the effectiveness of the implant and how patients are able to detect, discriminate and recognize auditory stimuli."

Those experiments ask patients to differentiate between a sound's quality, tone and volume, while also measuring their ability to recognize speech. 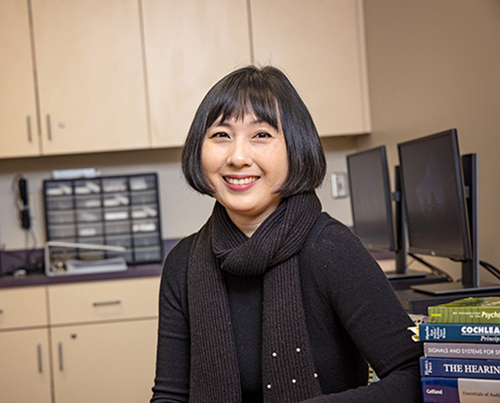 Zhou, who joined ECU in 2013, has secured total funding of more than $2.3 million. She received a New Investigator Award from the American Auditory Society in 2014.
"It may be as easy as playing a sentence to a patient and asking them what they hear to more subtle tests like determining if there is a short chirp at the end of a beep," Zhou said.

Traditionally, researchers have focused on the technical aspects of cochlear implants, including the size of the external components, how complex the signal from sender to receiver is, and how small internal electrodes can be designed. Where others are concerned about what technology can be used, Zhou and her lab are interested in whether patients are actually benefitting from the information their implants are delivering.

"You give a patient's brain all of this refined information using the best technology, but if their auditory nerve is degenerated, are they really benefitting from it?" Zhou asked. "Are they actually receiving the information and is it useful to them?

"That's where our research comes in. We study whether or not what we're programming in the clinic is actually optimal for their condition. Then we tweak the stimulation parameters and how they receive auditory information specifically for them. Each person is deaf in their own way and we see clinical benefits immediately when we do this type of personalized programming."

Zhou said its especially rewarding when she gets positive feedback from patients at the clinic.

"When a patient tells me they don't have to stop and stare at their spouse to understand what they're saying, it makes me feel good," she said. "That personal touch is very satisfying. The patients tell me what I do for them actually helps them when they walk out of the booth and it's encouraging."

Zhou believes that future research in her field will focus on nerve regeneration as scientists look to rebuild the damaged auditory nerve for deaf patients.

"I've always believed that we need to work on the receiving end of the technology," Zhou said. "The external technology we have is good enough. We have to figure out how to make the auditory nerve better after it's been damaged."

As for her five-year award, Zhou said her departmental leadership and college have played a big role in supporting her. She added that her lab wouldn't be successful without the assistance of her research audiologist and students.

"If you do good science, you'll shine," she said. "People will see you."

Ning Zhou is a recipient of two National Institutes of Health grants and has secured total funding of more than $2.3 million. She received a New Investigator Award from the American Auditory Society in 2014.