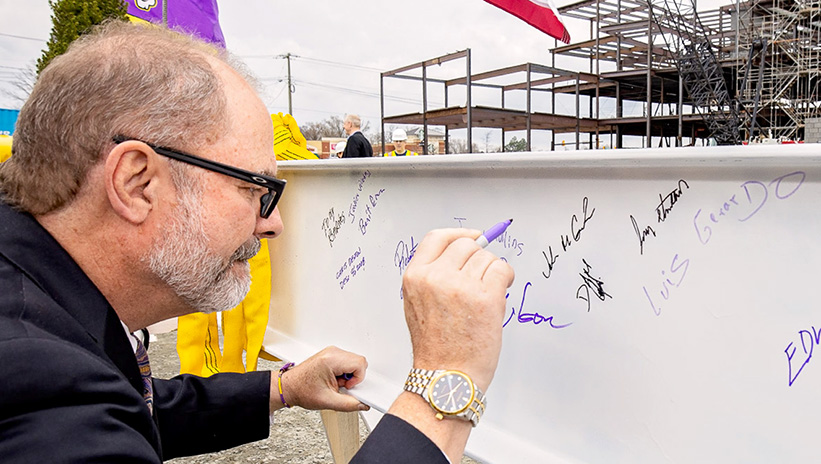 Construction of the East Carolina University Life Sciences and Biotechnology Building reached a milestone with a "topping out" ceremony Wednesday at the site on the corner of 10th and Evans streets in Greenville.

Workers put the final beam into place on the structure, signifying the completion of the skeleton of the building that will house interdisciplinary research in biotechnology, bioprocessing, biophysics, biofuels, plant biology, imaging and sensor development, and environmental biology. 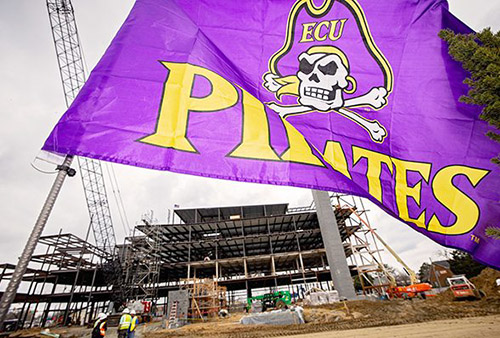 A Pirates flag attached to a beam flaps in front of the Life Sciences and Biotechnology Building.
"I'm so excited about this asset that will prove remarkably important for faculty and students, but to the city and the region, it will be a magnet for the attraction of talent and capital to Greenville," ECU Interim Chancellor Dr. Ron Mitchelson told the crowd gathered for the ceremony. " ... We're building a destination. There's no mistake about it here in Greenville, and this is an important part of that destination. This asset is something that we can all be proud of."

Dignitaries attending the ceremony as well as workers from construction company Rodgers Builders signed their names on the beam as is tradition before it was hoisted into place. A large American flag and a purple Pirates flag flapped in the breeze as a crane lifted the 400-pound beam from the ground.


"We’re building a destination. There’s no mistake about it here in Greenville, and this is an important part of that destination."
— Interim Chancellor Ron Mitchelson
"We are all about the success of our students and the success of our region, and this building really does symbolize the intersection of those two commitments to our students and to our region," Mitchelson said. "That building will host some of the greatest team science that this region has ever seen. It will host problem-solving capacity that has been unseen in this region forever. It will host scientists and engineers who will in fact apply themselves to the problems of a hospital, of the environment, of the manufacturing plant. You name the environment, we're after it. We're going to solve problems in there."

Mike Van Scott, interim vice chancellor for ECU's Division of Research, Economic Development and Engagement, said the building would serve as a gateway for eastern North Carolina to ECU, providing a dynamic environment where industry and community partners can engage with university faculty and students, and access university resources to address problems, develop innovative solutions and make strategic decisions for future growth and development.

"You put all those people together, they can define the problem better, define the questions that have to be asked and then answer the questions in a way in which you can come up with impactful solutions. That's powerful science. That's what's going to happen in this building," Van Scott said.

Mike Van Scott, interim vice chancellor for ECU’s Division of Research, Economic Development and Engagement, speaks during the topping out ceremony.
ECU broke ground at the site on July 12, 2019. Funded through the Connect NC bond referendum that voters approved in 2016, the $90 million building is slated to open in August of 2021. The 141,500 square-foot building will feature four stories with wet bench and computational laboratory spaces for researchers across a variety of academic disciplines.

The building is the first structure to be built on the ECU Millennial Campus, and the beam placed Wednesday signified the completion of 200,000 man hours of work that has already been put into construction.

Rodgers Builders serves as the construction manager of the building. The facility's primary design firm is Lord Aeck Sargeant, with other design partners including AEI, CLH, Lynch Mykins, The East Group and Thorburn Associates.