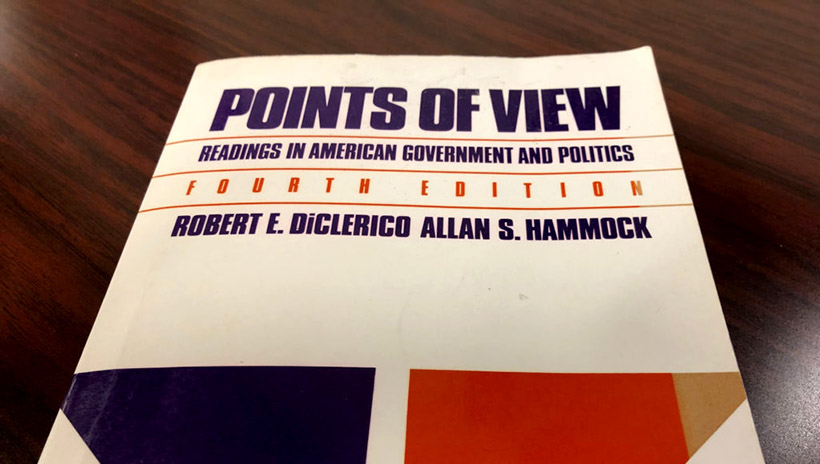 There's no question that Donald Trump defies precedents set by prior presidents. With or without Trump, American partisan political divisions appear as stark today as anyone can remember. The open embrace of socialism among some highly popular political actors on the anti-Trump left marks a sharp break from the recent past.

All of these factors might convince us that we're living in unprecedented times, dealing with brand-new issues, and questioning core tenets of our political system in ways never previously conceived.

A little history can tell us a different story.

While sifting through books the other day, I ran across Points of View: Readings in American Government and Politics, a paperback of less than 350 pages edited by West Virginia University professors Robert DiClerico and Allan Hammock. Originally published 40 years ago, my copy is the fourth edition from 1989. It might have been one of my college textbooks.

Most of its contents actually carry earlier initial publication dates, especially 1987 or 1988, near the tail end of Ronald Reagan's second term as president. The Cold War was still alive, if slightly thawed. Republicans were riding high after Reagan's landslide 1984 re-election. George Bush (his H.W. initials emerged years later) was campaigning successfully for what many observers considered Reagan's "third term."

Some Republicans still considered themselves liberal at that time, and plenty of Democrats still carried a conservative label. Bipartisan cooperation faced fewer barriers - either within Congress or between the executive and legislative branches. Persian Gulf conflict, Bill and Hillary Clinton, 9/11, and Barack Obama had yet to enter the national public consciousness.

So a political science textbook of the time must have dealt with completely different topics, right? Surely the top political thinkers of the day must have been wrestling with distinct challenges and conflicts?

No. As it turns out, many political issues that divide us today also divided us 30 years ago.

If you're concerned about the impact of gender-based pay inequities, special-interest money in politics, the proper role of government bureaucrats, even the extent to which our government relies on democratic principles, you'll find Points of Views chapters offering competing arguments on both sides of the issue.

The book devotes nearly 15 pages to the pros and cons of activist judges. The con-side contributor complains of court rulings that "have tended to concentrate power in the federal government in general and the Supreme Court in particular."

"These things mean little or nothing to those who would as soon have our country ruled by the arbitrary, uncertain, and inconstant wills of judges as by the certain and constant precepts of the Constitution," he adds. "If desirable ends are not attainable under the Constitution as written, they should be attained in a forthright manner by an amendment under Article V, and not by judicial alchemy which transmutes words into things they do not say. Otherwise, the Constitution is a meaningless scrap of paper."

You might expect that assessment from a typical Trump judicial appointee. The author is actually former U.S. Sen. Sam Ervin, the Democrat from North Carolina.

Trump's 2016 election win - despite his deficit in the national popular vote - sparked new debate over the future of the Electoral College. Trump's victory came 16 years after another Republican candidate, George W. Bush, triumphed under similar circumstances.

Yet Points of View shows us that the Electoral College divided mainstream political thinkers even in the 1980s, when three straight elections for Republican presidents provided lopsided electoral margins of 489-49, 525-13, and 426-111. Clearly, debate over the college's future did not arise solely because of hotly contested elections since the turn of the century.

Those who watched Trump march to the Republican presidential nomination in 2016, and those who believe Bernie Sanders will take a similar path to victory among Democrats this year, might agree with the notion that "The Way We Choose Presidents Is Crazy and Getting Crazier." That's the headline of a Points of View chapter based on a Washington Post column ... from 1987.

If you believe Trump wields too much power as president, you'll find similar concerns playing out in Points of View. Former U.S. senator and Democratic presidential nominee George McGovern spars with the then-president of the Center for the Study of the Presidency over the conflicts between an "unrestrained" president and a "meddling" Congress.

Nor does that chapter represent the book's only contemplation of the constitutional separation of powers. A group called the Committee on the Constitutional System calls for a "rethinking" of our current system to produce "Less Separation and More Power." Not so fast, counters political scientist James Q. Wilson. He argues for leaving the current system in place.

In the age of Trump, many of today's most heated arguments involve free speech. What are its limits? Who should decide?

Points of View tackled the same topic three decades ago. One article justifies free speech for "racists and totalitarians," while its opposite explains why Nazis should be considered "outside the Constitution."

Given the political dimension of today's free-speech debates, you might be surprised to learn who wrote the two pieces.

Longtime conservative commentator and current-day free-speech advocate George Will rejected speech protections for Nazis in the 1980s. Will insisted at the time that "the Constitution does not and should not provide any protection for the expression of views antithetical to the values upon which our Republic is based."

Meanwhile, the American Civil Liberties Union offered a full-throated defense of free speech for even the worst speakers, arguing "The principles of the First Amendment are indivisible. Extend them on behalf of one group, and they protect all groups. Deny them to one group, and all groups suffer."

Contrast that assessment from the 1980s to the present-day ACLU, which backed away from supporting free speech for racists involved in the fatal Charlottesville, Virginia, rally of 2017.

This last example reminds us that individual political thinkers and organizations can change their views over time. Much can happen in the span of 30 years to shift priorities.

But a quick flip through the pages of an old copy of Points of View demonstrates that some political divisions remain constant. They spark heated debate - across decades - regardless of who sits in the White House.