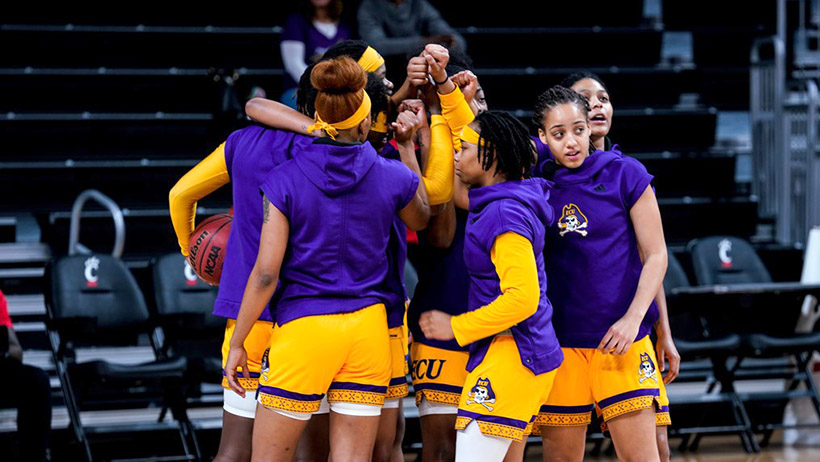 GREENVILLE, N.C.     With the regular season in the rearview mirror, the ninth-seeded ECU women's basketball team will open the American Athletic Conference Tournament against eighth-seeded Temple on Friday afternoon in Uncasville, Conn.

Despite road losses in two of its final three games, ECU (9-20, 6-10 AAC) finished its season on a 6-4 stretch. The Pirates won their final five home games, including coming back from 17-point and 14-point deficits against Temple and Tulane respectively. All eyes will be on Lashonda Monk on Friday, who is not only ECU's leading scorer, averaging 14.7 points, but also needs three steals to break Toina Coley's ECU single-season record. Monk currently has 121 steals this season and has already broken the ECU and AAC career records in this, her junior campaign. Along with Monk, Taniyah Thompson is the other Pirate scoring in double-figures, averaging 13.7 points which led all AAC rookies. The Pirates will need a third scoring option behind Thompson and Monk, because in five of their six conference wins, at least three players have scored in double-figures. ECU's third scoring threat has been Dominique Claytor, who is averaging 7.2 points and 6.2 rebounds. When Claytor scores at least 10 points this year, ECU is 7-1. As a team, the Pirates broke the school's single-season steal record of 388 set by the 2011-12 campaign. The Pirates are up to 397 takeaways this season with both Monk and Claytor (90, sixth), both in the top-five in single-season steals. Claytor needs one more to tie Coley for the fifth-highest total in ECU history.

Temple (15-14, 7-9 AAC) finished the regular season on a four-game losing streak to drop to the No. 8 seed in the AAC Championship. The Owls losing streak started with a loss at ECU, and Temple is just 5-9 away from home. Temple had a pair of players finish in the top five in the conference in scoring. Mia Davis is third in the league and 33rd in the country in scoring, averaging 18.6 points. Ashley Jones is fifth in the AAC with an average of 16.4 points. The pair combined for 27 points in the first meeting between ECU and Temple. Davis led the AAC in rebounding, grabbing 10.3 boards and was the only player in the conference to average a double-double. Davis is especially active on the offensive glass, ranking 13th in the nation with 4.2 offensive rebounds a night. Marissa Mackins is the top shooter for the Owls, checking in at second in the AAC with 73 made three-pointers, good for 2.61 per game. As a team, Temple is in the top-75 in the NCAA in both threes attempted and made. However, the Owls struggle to prevent triples on the other end, allowing opponents to make 34.3% of their shots from beyond the arc which is 320th in the nation.

Temple has a 6-2 edge in the all-time series, but ECU has won the only postseason meeting between the two schools. That game came in the 2015 quarterfinals as the fifth-seeded Pirates topped fourth-seeded Owls 77-71 behind 22 points from Jada Payne and a double-double from I'Tiana Taylor. It will be just the third time ECU and Temple have played twice in a season. In 2014-15, Temple won in the regular season while ECU won in the league tournament. In 2016-17, Temple swept the series.

ECU is 4-4 all-time in the American Tournament and is 3-1 in the First Round. The Pirates have lost their opening game of the tournament just once, in 2017 when they fell to SMU in the first round. ECU has advanced to the Quarterfinals each of the last two years, beating SMU on both occasions. It is the first time that ECU has been seeded ninth, but the Pirates have played in the 8-9 game four times, all as the No. 8 seed. With a win against Temple, ECU will advance to face top-seeded UConn for the fourth time in six years.

Tipoff is scheduled for 2 p.m., on Friday afternoon at the Mohegan Sun Arena. Fans can stream the game on ESPN3 or follow the live stats HERE.