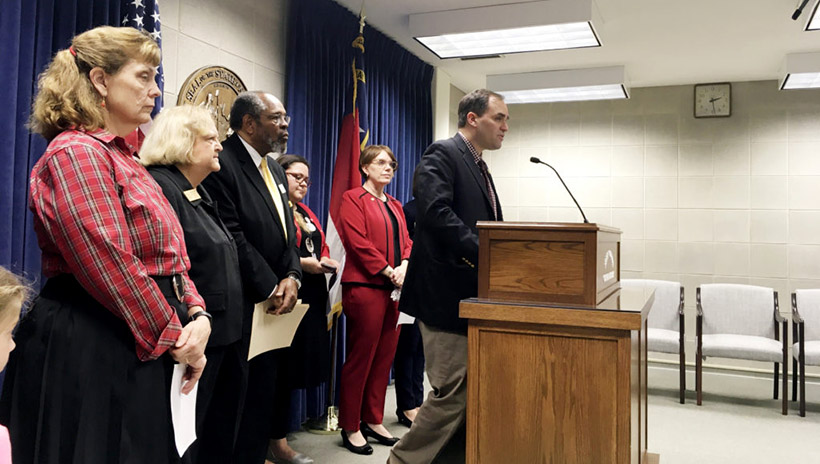 Teachers and retirees are suffering without a budget in place, two freshman Democratic lawmakers said during a March 10 news conference. A spokesman for the Republican leader of the Senate said the General Assembly has passed a budget, but obstinate Democrats - including Gov. Roy Cooper - continue blocking the spending plan from taking effect.

The two lawmakers called for Senate leader Phil Berger, R-Rockingham, to sit down with Cooper to negotiate a budget compromise. But Pat Ryan, a spokesman for Berger, said the two leaders have been talking and chided the Democratic lawmakers for being unaware of those discussions.

The group said the budget stalemate has roiled the public education system. School districts can't fill vacancies. School support staff and educators are forced to work multiple jobs in order to survive. Retirees aren't able to keep up with inflation.

"Funding education isn't up for debate. It's required by the state constitution and protected by the court," Von Haefen said, referencing the Leandro court decision requiring the state to provide every student with access to a sound, basic education.

"The problem is Republicans want it their way or the highway," the Wake senator said. "They have presented only one option and that's their budget."

The governor has provided a compromise budget, but Republicans haven't responded, Nickel said.

"Senator Berger spoke with Governor Cooper last week," Pat Ryan, a spokesman for Berger said in an email. "We're sorry to see Senator Nickel wasn't kept in the loop on those developments."

The General Assembly is scheduled to return April 28 for a short session. No agenda for the short session has been released.

Nickel and Von Haefen want lawmakers to act sooner. Before the end of the month, the General Assembly should return to pass mini budgets covering teacher pay raises and cost-of-living adjustments for retirees, Nickel said.

Democratic and Republican lawmakers have been locked in a stalemate since June, when Cooper vetoed the $24 billion General Fund budget. Cooper wanted more money for teacher pay raises and school construction, as well as funds to expand Medicaid.

The House managed to override the veto Sept. 11, 2019, but most Democratic representatives weren't in the chamber. House Democrats said they were told no votes would be held that morning, but the Republican leadership has been adamant that it was just a misunderstanding.

The Senate hasn't tried an override vote, though it almost happened during a one-day session in January. Some Senate Democrats would have had join Republicans to override the veto, but Berger couldn't get any Democrats to go along.

In October lawmakers passed Senate Bill 354, the Strengthening Educators' Pay Act, one of several mini budgets. S.B. 354 would have given educators the pay raises that were outlined in the budget. Cooper vetoed the bill.

An attempt to override the veto failed. Senate Democrats said the pay raises Republicans offered were inadequate and didn't do enough to help support staff including bus drivers and janitors.

"It's rich to get lectured about the importance of teacher pay by somebody who single-handedly blocked a teacher raise," Ryan said of Nickel. "If he'd just voted yes, then teachers would be earning more money right now."