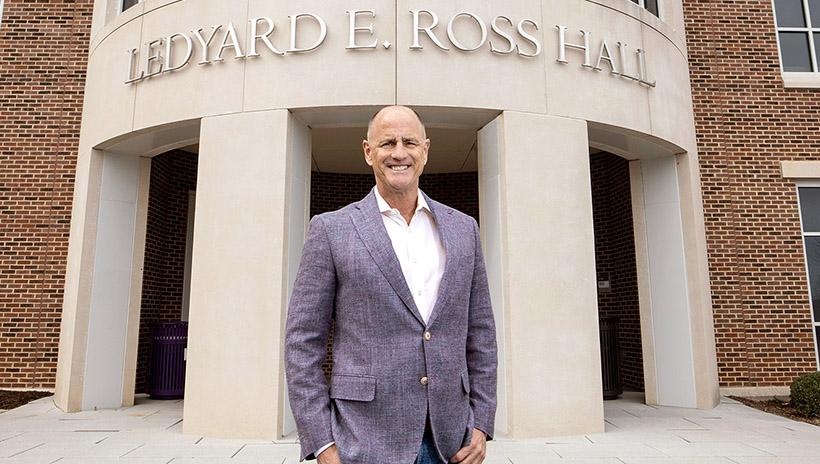 Dr. Dennis Ross grew up watching his father work as an orthodontist in Greenville. It motivated him to become an orthodontist himself and follow in his father's footsteps, eventually taking over the business of Ross Orthodontics.

"When you grow up, you have lots of role models. My dad was my role model," Dennis Ross said. He saw the huge impact orthodontia had on patients, from improving their smiles to boosting their confidence. "You change their lives. I got to watch dad do it and decided the hard work would be worth it," he said.

His father was a role model in other significant ways, too. Dr. Ledyard Ross' philanthropy - committing $4 million to name the dental school - impressed upon his son the value of giving.

Dennis Ross recently made a gift of nearly $1 million to ECU to be divided between the dental school, the College of Health and Human Performance, and athletics. While Ross is not an alumnus (ECU didn't have a dental school when he was pursuing his Doctor of Dental Surgery), he wanted to give because of the impact ECU has on students and the surrounding community.

"ECU's dental school was the first thing in my mind. The money there will be used for students who need funding for their schooling, as well as patient care funds," he said. "My dad's dream when he put the money forth for the dental school was for everybody to have access to care. Dad was a giver and I'm following his lead."

The gift will be used for various needs in health and human performance, where Ross has served on the advancement council, and generally for athletics, as Ross is an avid Pirate sports fan. He even wanted to be a professional athlete once, but now enjoys spending his free time on cross country bike rides - often raising money for local Boys and Girls Clubs.

"ECU is a good place for our resources," Ross said. "It will put those resources to good use. East Carolina's been a big part of my life forever. If ECU grows, our whole community does well."

Ross' two daughters also have ECU ties. Keehln Ross Page graduated in 2010 with a degree in business administration, and Eliza Ross is currently pursuing a master's in psychology.

Just as Ross was motivated to give, he hopes he can serve as motivation for others.

"You hope you might inspire others and that your gift will get magnified," he said.

Vice Chancellor for University Advancement Christopher Dyba said Ross' gift is a showcase of the ripple effect philanthropy can have. "Not only is his gift touching multiple areas of campus, but it has the potential to generate gifts from others who follow his example, just like Dennis followed the example of his father Ledyard."