ReopenNC Seeks Clarity on (And Easing Of) Rules Limiting Protests 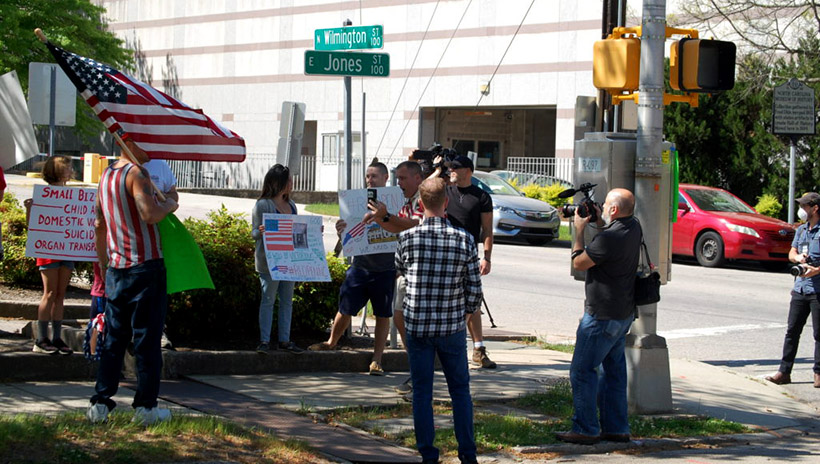 The grassroots group ReopenNC has asked Gov. Roy Cooper and the chairman of the Wake County Board of Commissioners to clarify COVID-19-related emergency orders, claiming they violate constitutional rights of free assembly and free exercise of religion.

ReopenNC, which started as a Facebook group in early April, has more than 55,000 members. The group hired lawyer Anthony Biller of the Raleigh firm Michael Best to contact Cooper, N.C. Attorney General Josh Stein, and Wake County Commission Chairman Greg Ford. A letter from Biller requests relief from the orders. It also seeks assurances that participants in a planned April 21 protest outside the Executive Mansion can demonstrate peacefully without the threat of arrest, so long as participants practice social distancing. The group wants a response by 2 p.m. Monday, April 20. (Disclosure: The John Locke Foundation, publisher of Carolina Journal, has contracted with Biller for intellectual-property services for more than a decade.)

Cooper imposed a statewide COVID-19 executive order banning sit-down service at restaurants and private clubs March 17. He extended the order March 27, closing all "non-essential" businesses, ordering residents to stay at home except for "essential" purposes outlined in the order, and barring "mass gatherings" of 10 or more people. Cooper's order expires April 29. The governor hasn't said if or when he would modify the order.

Meantime, Wake County officials issued emergency orders stricter than the governor's March 26 and April 15. The March 26 order initially defined gun stores as "non-essential" businesses, but under pressure the county backed down. It did, however, outlaw indoor religious services even if parishioners practiced social distancing and banned at least one drive-by Easter service.

The moves were made to limit the spread of the novel coronavirus. There's no proven treatment or cure for the virus other than isolation and medical aid to reduce the severity of its effects.

Biller's letter for ReopenNC cites a series of state and federal court decisions upholding the rights of peaceful assembly in the face of government orders blocking them. The decisions invoked protests at abortion clinics and marches during the civil-rights era. The letter also notes that while the goal of the orders "may be laudable, the economic and social consequences of the governmental response to the COVID-19 crisis have been and are real, concrete, and harmful."

At the April 14 ReopenNC protest, more than 100 people sat in parked cars or stood near the corner of Wilmington and Jones streets, holding signs and blowing their horns. Capitol police broke up the protest about 90 minutes after it began. One of the protesters, Monica Ussery, was charged with violating an executive order, a Class 2 misdemeanor.

Both Raleigh officials and Cooper defended the arrest while claiming the orders didn't infringe on individual rights protected by the federal and state constitutions.

Jeanette Doran, CEO and general counsel at the N.C. Institute for Constitutional Law, disagrees. "First Amendment rights aren't absolute, but neither is government power," she told CJ last week. Doran has offered to help the Cooper administration and local governments revise or rescind their restrictions to "ensure that constitutional rights are protected."

ReopenNC organizers said they plan protests in Raleigh each Tuesday from 11 a.m. to 3 p.m. until the orders are lifted. Organizers have asked those attending the March 21 protest to practice social distancing (unless people live in the same household) and demonstrate peacefully.

As this story went to press, neither Cooper's office, Stein's office, nor Wake County officials had responded to the letter, Biller told CJ.

If the government agencies fail to "offer something fair and reasonable," Biller said, "then we have no choice but to seek out judicial relief."