Published: Friday, May 1st, 2020 @ 8:27 am
By: Carolina Journal   ( More Entries )
Publisher's note: This post appears here courtesy of the Carolina Journal, and written by Brooke Conrad. 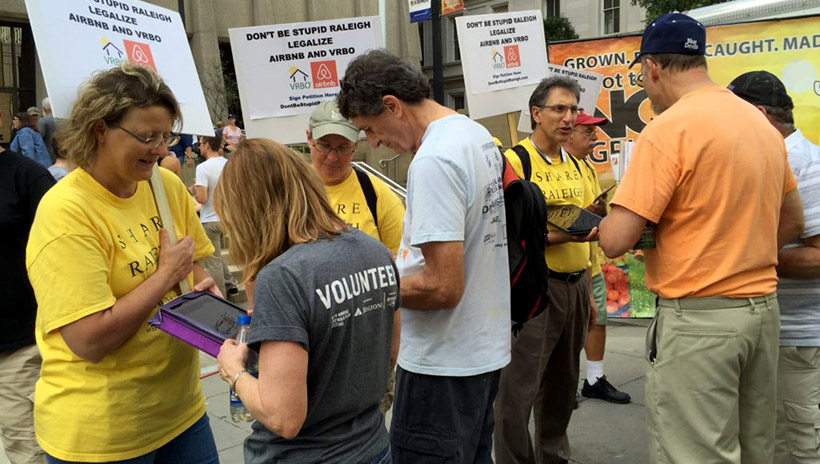 Rallying campaign supporters will be tough with coronavirus restrictions placing large in-person events on hold. | Photo: Carolina Journal
Picnics, county fairs, and local festivals are out. Zoom meetings and email blasts are in.

Coronavirus restrictions hit North Carolina days after the March 3 state primary. None of the winners anticipated that within a few weeks, social distancing would reduce their campaigns to virtual meet-and-greets.

For now, Holley's campaign is prepared to ride out the summer without hosting any in-person events, Ash said. Door-knocking and other personal forms of interaction will probably morph into phone calls. Holley's opponent, Republican Mark Robinson, agreed to two debates, but the camps haven't decided on a format.

"We're doing our best to stay flexible and see what comes at us," Ash said. "We're learning as we go."

Political campaigns likely will remain stunted through much of the summer as the state gradually lifts social distancing restrictions. Fundraising screeched to a near halt after thousands of North Carolinians lost their jobs, overwhelming the N.C. Division of Employment Security with extraordinary numbers of claims (more than 700,000, to date). While elected officials benefit from increased airtime as they manage the public crisis, they and their non-incumbent opponents have found few ways to reach potential voters with campaign messages.

Even before coronavirus, campaign strategies had shifted toward digital platforms, noted Josh Kivett, a national political strategist with Majority Strategies, a Republican consulting firm. Handheld devices and other digital platforms transformed the political landscape, just as they did the advertising industry, interpersonal communications, and a host of other fields.

Several candidates hold one-on-one telephone calls with community and opinion leaders in their districts, Crone said. The best strategy right now is to expand networks before the end-of-season crunch.

"I have seen several local candidates work to build specific support groups with women voters, farmers, and veteran groups," Crone said. "Building these grassroots contacts will help them get out the vote efforts easier in October."

For candidates in local races - such as county commissions - who rely on more traditional messaging, digital advertising may hold a larger appeal than normal, said Patrick Sebastian, a Majority Strategies consultant.

Sebastian's firm has seen an exponential spike in phone use and digital advertising, he said. Voters stuck at home by social distancing practically constitute a captive audience.

Still, that doesn't mean voters are in the mood for run-of-the-mill electioneering.

"Right now, people are not really interested in the politics of anything besides coronavirus," Sebastian said.

It's a tough line to walk. For now, Catherine Truitt, chancellor of Western Governors University N.C. and candidate for superintendent of public instruction, is sticking to email messaging.

"I think it would be in bad taste to weigh in right now with what's going on, with what the State Board of Education and Department of Public Instruction and the legislature are trying to do," Truitt said. K-12 students won't return to traditional classrooms this school year.

"They're working as hard as they can to do what's right for the students and they don't need candidates weighing in and Monday-morning quarterbacking."

Meantime, candidates will continue to rely on virtual formats such as tele-town halls and Zoom meetings.

"I do believe that we will get back to some type of regular order as social distancing protocols are relaxed," Crone said.