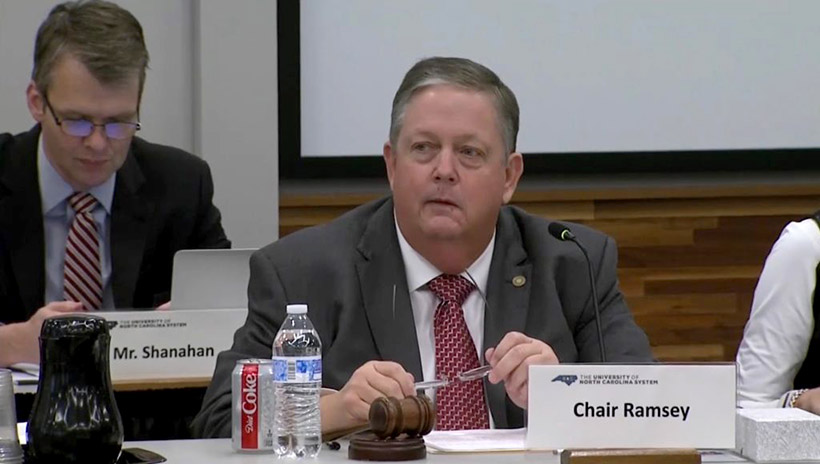 Chairman Randy Ramsey of the University of North Carolina System Board of Governors speaks during the Jan. 17, 2020, BOG meeting. | Photo: UNC-TV

Beaufort businessman Randy Ramsey has been elected permanent chairman of the University of North Carolina System's Board of Governors.

It's a welcome development for a board that's weathered years of tumultuous relationships and high turnover in leadership, BOG member Marty Kotis told Carolina Journal.

The 24-member body has been led by four people since 2015. The board's most recent chairman, Harry Smith, was a controversial "change agent," who often didn't seek board cooperation or approval when making decisions, Kotis said. Known by many of his associates as a "bull in a china shop," Smith resigned as BOG chairman in October 2019. Weeks later, he left the board altogether, citing the demands of his growing business. Ramsey, then vice chairman of the body, stepped into Smith's shoes as a temporary replacement.

On Monday, May 11, the board voted, 21-1, to keep Ramsey in the job until 2022. Wendy Murphy, who served as the board's vice chair since October, was also permanently installed. Board Secretary Pearl Burris-Floyd was re-elected for a second term.

"I wish to extend my gratitude to my fellow board members for their support and willingness to work together," Ramsey told CJ in an emailed statement. "This past year, our board has dealt with many unexpected issues and I'm proud of the way we have remained focused on finding solutions that strengthen our great university system."

BOG member Bob Rucho, a dentist and former state senator from Matthews, was the only member to vote against the placements. CJ phoned Rucho for comment, but didn't get an immediate response.

Ramsey, Murphy, and Floyd are servant leaders, Kotis said, and bring a much-needed combination of passion and teamwork to the BOG.

"The chair's role is to coordinate the will of the board, and accomplish that," Kotis said. For too long, board leaders failed to strike that balance, he said, but Ramsey has been a stabilizing force.

The UNC System, which is seeking a permanent president, in five years has cycled through leaders at nearly the same rate as the board. In 2015, former UNC President Tom Ross was fired, and Junius Gonzales, then UNC's chief academic officer, served as interim president for a few months. In 2016, former UNC President Margaret Spellings took office. Her administration had a strong alliance with BOG Chairman Lou Bissette. But when Smith took up board chairmanship in July 2018, conflict ensued. Spellings resigned a few months later. In January 2019, former UNC Health Care CEO Bill Roper became UNC's interim president. He planned to leave UNC by June 30, but recently signaled he may keep the job until the system hires a permanent leader.

UNC's presidential search committee will meet Wednesday to consider candidates. The timeline for hiring may be delayed because of COVID-19.

The board is scheduled to meet in regular session next week.
Go Back