Political Tensions Rise as RNC Considers Pulling Away From Charlotte | Beaufort County Now | As North Carolina grapples with President Trump’s call to pull the Republican National Convention from Charlotte, both Democrats and Republicans are seizing on the moment — using the fight to appeal to their respective bases.

Political Tensions Rise as RNC Considers Pulling Away From Charlotte 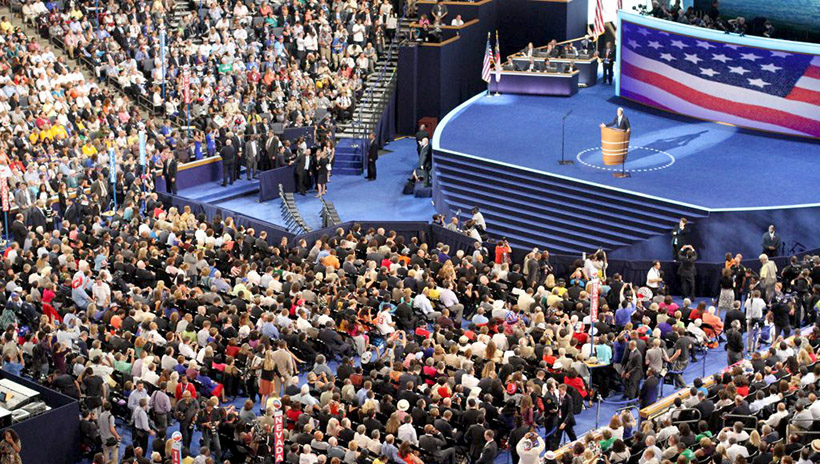 The scene from the 2012 Democratic Nominating Convention in Charlotte. | Photo: Don Carrington/Carolina Journal

As North Carolina grapples with President Trump's call to pull the Republican National Convention from Charlotte, both Democrats and Republicans are seizing on the moment — using the fight to appeal to their respective bases.

But despite GOP attempts to bash Gov. Roy Cooper over his refusal to budge on COVID-19 and social-distancing conditions related to the event, the Democratic governor may end up stronger politically because of his clash with Trump, several political scientists say.

On Tuesday, June 2, Trump tweeted the GOP would be "forced" to find a new host for its August convention. The announcement followed Cooper's statement that North Carolina probably won't host the event at full capacity due to COVID-19 and the governor's rigid reopening plan. North Carolina is still in Phase Two of Cooper's reopening, which began May 22 and could last another three weeks. Restaurants, breweries, wineries, and distilleries were allowed to open at 50% capacity with social-distancing protections. Salons and barber shops reopened. But gyms and private bars and clubs were forced to stay closed weeks longer. Many have filed lawsuits, and others are threatening to follow.

"We have a contract in place with the RNC to host the convention and the city attorney will be in contact with the attorneys for the RNC to understand their full intentions," the post says.

Part of the contract requires the GOP to hold the "business of the convention" in Charlotte, but that's a formality Republicans will likely work around, CJ learned from a source close to the RNC.

Now, while Republicans look to cities such as Florida's Jacksonville or Orlando to host their event, some are accusing Cooper of shutting the RNC out of Charlotte on purpose.

"Governor Cooper is either remarkably incompetent or this was his aim the entire time," the N.C. GOP said in a news release Wednesday. "How difficult would it have been for his administration to provide the basic guidelines, assurances, and numbers the RNC asked for?"

Lt. Gov. Dan Forest, a Republican who will face Cooper in the November race for governor, came out swinging against the Democrat in a statement Wednesday.

"Gov. Cooper has delivered a clear message that North Carolina is not open for business, and the repercussions to jobs and livelihoods will be long-lasting," Forest said. "When other states' 'science and data' shows that it is safe to host a convention in August, it is clear the Cooper administration is playing politics."

If the implication is that Cooper is dragging his feet to reopen North Carolina simply to push the RNC out of Charlotte, that strategy is highly unlikely, said Andy Taylor, a political scientist at N.C. State University.

Cooper is cautious, Taylor said, and in some ways the governor's slow reopening plan falls in line with his personality. So far, a majority of North Carolinians approve of his tactics.

That's true, said David McLennan, a political scientist at Meredith College. But in a world of fast-changing opinions, riots, and politically and racially charged protests, the tide may turn.

"As the federal stimulus money dries up and certain businesses remain closed, the possibility exists that Cooper's approval ratings may slowly deteriorate."

A Wednesday poll from the Civitas Institute shows the governor's job approval rating at 63%, a 7% decrease since April 7. Disapproval of Cooper climbed 9% since April, going from 24% to 33%. Voter disapproval of President Trump is also ticking upward, rising from 45% to 48%, Civitas reported.

Cooper has been highly inconsistent with his messaging, said Taylor, especially as protests against the death of George Floyd have erupted around the state. On one hand, the governor exists in a pandemic world that requires social distancing. On the other, he supports mass gatherings to call out racial injustice.

In November, those two worlds will be more compatible, Taylor said. Now, the governor is sending voters mixed messages about his priorities.

"Both of those things can be a problem. But they can't both be the most important problem," Taylor said. "It does make him look contradictory. They don't fit together."

Chris Cooper is a political scientist at Western Carolina University. The RNC's potential withdrawal from Charlotte is coming at a particularly tough time for the governor, he said, since the politician must juggle health risks and conversations about race — while also negotiating with Trump.

"Thus far, he's been able to ride the wave fairly well — the question remains: Will he be able to bail out before it crashes on him?"

Trump will again prove an interesting player in the political game with state Democrats, Chris Cooper said. But while the president is influential in planning the RNC, the final decision about location isn't up to the president.

The president will no doubt capitalize on his public disagreement with North Carolina's governor, Chris Cooper told CJ. "He will almost certainly cite this as an example of his superior negotiating skills. Indeed, this is the part of politics that Trump seems to enjoy most."

Charlotte is set to lose hundreds of millions of dollars, Trump said in his Tuesday tweet. The N.C. GOP, in its Wednesday statement, said that number would be close to $150 million.

In 2012, the Charlotte Democratic National Convention contributed $91 million to the local economy, the Charlotte Business Journal reported. Its total economic impact in North Carolina was close to $164 million.

No one can be certain how much money Charlotte will lose if the RNC moves to a different city, Taylor said, but Republicans will undoubtedly lay the financial consequences at Cooper's feet.

The real victims of the potential RNC fallout are the hotels, restaurants, and bars that have been closed for months, waiting for Cooper's go-ahead to reopen, the N.C. GOP said.

At this point, the damage isn't even political, said Dallas Woodhouse, former executive director of the N.C. GOP. It's personal.

"There's a great deal of sadness for the state that is well beyond the politics," Woodhouse said of Charlotte business owners and workers.
Go Back