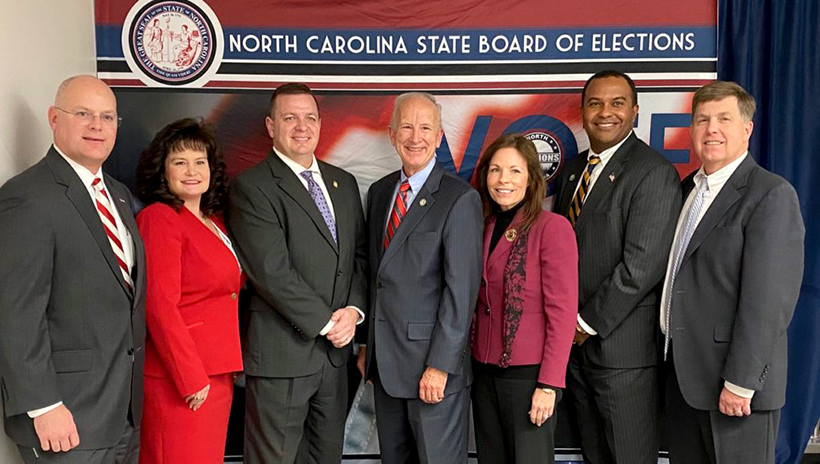 In this year's election, the money leans left. School choice is the target. You can see it in the race for state superintendent and, subtly, in the fight for state Supreme Court.

Democratic superintendent nominee Jennifer Mangrum has outraised Republican Catherine Truitt by more than a five-to-one margin. Campaign reports from the end of the second quarter show Mangrum raking in nearly $281,000. Truitt? $52,000. It's unclear how much more money has come from outside groups such as 501(c)4 nonprofits, which can raise money without limits but can't coordinate messages with candidates.

Looking at "cash on hand," the money candidates can spend immediately from their accounts, the three Democrats had $2.2 million at the end of the June 30 reporting period. The three Republicans? Roughly half that.

Democrats have a six-to-one majority on the Supreme Court. If they sweep the November races, they'll hold all seven seats.

These down-ballot races rarely get much media scrutiny. But political activists see how much they could sway state policy, with school choice as a partisan battleground. As we get closer to election day, look for more money to flow to these races, especially from outside groups that back Democrats while operating independently of the campaigns.

Mangrum walks in lockstep with the education establishment. In a candidate survey for Durham's left-wing People's Alliance PAC, Mangrum said she would get rid of Opportunity Scholarships, cap the number of public charter schools and bring them under the control of traditional school districts, and oppose both the Innovative School District and the N.C. Virtual Charter schools.

In her response to the People's Alliance PAC survey, Truitt said she supports Opportunity Scholarships, backs charters and revisions to the ISD that became law this year, and has concerns about the financial accountability of the virtual charters.

Judges aren't supposed to signal how they'll vote on cases. But voters can judge judges by the opinions they've written. Newby and Beasley disagree about school vouchers. In the 2015 Supreme Court decision upholding Opportunity Scholarships, Newby is the only justice still on the court who was part of the 4-3 majority favoring school choice. Beasley voted with the minority and wrote a separate dissent.

In her dissent, Beasley called the Opportunity Scholarship Program a "cruel illusion [which] stands to exacerbate, rather than alleviate, educational, class, and racial divides." She also suggested, without evidence, that a voucher program may allow white flight to private schools, saying "public schools may be disproportionately populated by minority children."

While judicial candidates may not say much about controversial issues, outside groups can speak for them. With money. Just don't expect much of it right away, predicts Douglas Keith, a counsel for the Democracy Program at the Brennan Center for Justice at New York University. The Brennan Center is a liberal watchdog group that tracks campaign finance of state judicial races, among other issues.

"Outside groups can dominate spending" in judicial races, Keith told Carolina Journal. "I've seen them jump in at the very end — one week before the election," if they think they can change the trajectory of a race.

The COVID-19 pandemic should alter the 2020 timeline, Keith said. With more voters expected to cast absentee ballots, ad buys that might take place in mid-October or later could come in September.

Presidential election years tend to attract more money to court races, he said. Other issues drive spending, too, such as the number of seats in play or the opportunity to change the ideological balance of the court. Both factors apply in North Carolina.

In 2018, all $1.2 million in outside spending supported Democrats. In 2014, $2 million was spent outside the candidates' accounts, all of it backing conservatives (Supreme Court seats were nonpartisan that cycle).

The groups "are sophisticated political spenders who know how the court interacts with the other branches of government," Keith said.

When candidate filing opened in December, Newby, Berger, and Barringer were joined at State Board of Elections headquarters by four of the five Republicans running for seats on the N.C. Court of Appeals. (Absent was District Court Judge Jefferson Griffin, a member of the N.C. National Guard who was deployed to the Middle East.)

Several months earlier, Berger tweeted the eight Republicans were running as a team. "We all have on the same jersey. We all share the same judicial philosophy. And we're all conservative!"

Berger said Newby was the "quarterback" who came up with the game plan to run as a unified ticket.

The Brennan Center's Keith went further. He said it was the first time he's seen such coordination among judicial candidates anywhere in the country.

"Outside groups can lump candidates together in their [ad buys] to increase the value of the money they spend," Keith said. But what's going on with Republicans in North Carolina this year is new.

Keith says the politicization of judicial elections may be pushing candidates of similar philosophies to pool resources.

With a chance to sweep all seven Supreme Court seats, gain majorities in both houses of the General Assembly — which will draw new congressional and legislative districts in the 2021 session — and take charge of education policy in the Council of State, the courts could become an even larger cog of a growing Democratic Party machine.