Murder most foul; Justice denied | Beaufort County Now | May I introduce you to some of the first-degree murderers who had their death sentences indefinitely postponed by our state Supreme Court on June 5. | North Carolina Supreme Court Justices, Paul Skip Stam, Kenneth Bernard Rouse 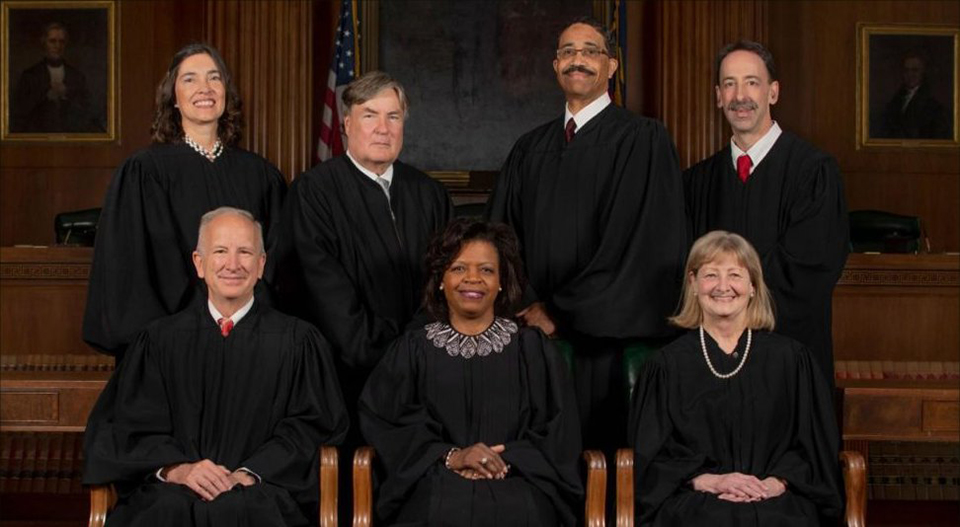 
May I introduce you to some of the first-degree murderers who had their death sentences indefinitely postponed by our state Supreme Court on June 5. All of these are from Randolph County in chronological order.

Rouse stabbed Hazel Broadway to death while she was working at a convenience store. He was sexually assaulting Ms. Broadway's body while the knife was still in her neck. An Asheboro police officer responded to the convenience store after a call from a citizen who noticed Ms. Broadway was not at her check out station. The officer discovered Rouse with Ms. Broadway's body in the back of the store and covered in her blood. Rouse was also convicted of armed robbery and first-degree rape.

NOTE: Rouse was suspected of murdering another older woman prior to Ms. Broadway. DNA testing many years later matched him to evidence left at the scene of that murder. Since he was on death row, Rouse has not been charged in that murder.

Williams brutally beat and then strangled to death Elvie Marie Hamlin Rhodes. Ms. Rhodes' body was found by hunters. An investigation revealed that she was murdered in her home. Large amounts of blood and blood spatter were located. The autopsy revealed that Ms. Rhodes was beaten severely about the upper body and died from a combination of blunt force trauma and strangulation. Williams' fingerprints were found in the victim's stolen car. Williams attempted to blame a woman he was in a relationship with for the murder.

Kandies raped and beat to death Natalie Lynne Osborne, age 4. Kandies was the boyfriend of Natalie's mother. After murdering Natalie, he hid her body in a closet. A huge search for Natalie was conducted over several days. When her nude and beaten body was discovered in a plastic bag in the closet of her home, Kandies claimed he had accidentally ran over her with his vehicle. The autopsy revealed that Natalie had been brutally beaten and raped. Kandies was also convicted of first-degree rape of a child.

Hurst robbed and murdered Daniel Lee Branch. Branch was a hard-working family man, married with children. He needed cash and was selling several firearms he owned in order to raise money. Hurst contacted him through a mutual acquaintance and expressed interest in buying the firearms. Branch agreed to take Hurst and another man to a remote field to demonstrate that the firearms worked. As Branch walked into the field to set up a target, Hurst shot him with a pump shotgun. Branch fell and then got up and began to run for his life. Hurst shot him again and Branch fell. Hurst then walked to him and stood over Branch as he begged for his life. Hurst shot him a third time in the face. Hurst then removed the keys to the car from Branch's pocket and took the car and guns, travelling to West Virginia. Before leaving the area, he sold some of the firearms. Apparently, Hurst's motive was to obtain the means to see a girlfriend.

Badgett robbed and murdered J.C. Chriscoe in the older man's home. Badgett was homeless and Chriscoe had agreed to let him stay in his home temporarily. Badgett stabbed Mr. Chriscoe in the throat and by his own admission followed him around the house as he bled to death, even knocking him down when he tried to call for help. Badgett claimed self-defense, alleging that Mr. Chriscoe became irate and irrational and was yelling at him. After murdering Chriscoe, Badgett came back to the house on subsequent days stealing and selling items from the house. Badgett had been convicted of manslaughter years before by stabbing that victim in the throat at the same location (at the Adam's apple). Badgett had a violent history of stabbing and beating other persons while in custody.

In all his records, including military records, Polke was listed as white. He now claims some small percentage of American Indian heritage for the purpose of his Racial Justice Act claim.

Wilkerson murdered Casey James Dinoff and Christopher Cameron Voncannon. Wilkerson was a violent drug dealer and he believed that one of the victims owed him a small amount of money for a drug sale. He obtained an SKS rifle that had been modified to fire fully automatic. He drove to the residence of the victims at night where he cut power lines to the house and burst in killing both victims. One was asleep on the couch. In recorded phone conversations, Wilkerson bragged about the murders, stating he felt like a Navy SEAL.

Could you tell which ones were black or white? I couldn't but five are white, one is Black and one is listed in military records as white but now claims a small percentage as an American Indian. All obtained a new lease on life because of the Racial Justice Act.

In addition, there was a Gary Allen Trull who was also white. Trull had his death sentence postponed by the Racial Justice Act so long that he has now died of natural causes.

Trull murdered Vanessa Dixon. Trull died while on death row. Trull had previously been convicted of a brutal first-degree rape in Guilford County and sentenced to life. He was paroled and settled in Randolph County in an apartment complex where Vanessa also lived. Trull kidnapped Vanessa Dixon from her apartment, transported her into a secluded area and raped her while she was tied to a tree. He then murdered her by cutting her throat. Vanessa's badly decomposed body was discovered by hikers many days after she went missing. The autopsy revealed that she had been raped. DNA testing matched the semen to Gary Trull. He was also convicted of kidnapping and first-degree rape.


On June 5, 2020 the North Carolina Supreme Court reinstated the Racial Justice Act for these first-degree murderers on death row. There has not been an execution in North Carolina since 2006. Most of these first degree murderers were sentenced to death long before 2006. Effectively the decision of the state Supreme Court lengthened the moratorium on the death sentence by another 5-10 years.

Let's see how this happened.

Public reporting on this decision has been wrong. On June 5, WRAL published an article online which said that the Racial Justice Act "allowed death row inmates to seek to have their sentences commuted to life without parole if they could prove that racial bias may have tainted their trials." Similar statements were made by NC Policy Watch and on NC Spin. These reports may have been induced to report it this way because the State Supreme Court opinion written by Associate Justice Anita Earls stated:

"Here the right is to challenge a sentence of death on the grounds that it was obtained in a proceeding tainted by racial discrimination, and, if successful, to receive a sentence of life without parole. Repealing the Racial Justice Act took away that right," State v. Ramseur, No 388A.10 June 5, 2020 Slip opinion p 31.

"a finding that race was the basis of the decision to seek or impose a death sentence may be established if the court finds that the State acted with discriminatory purpose in seeking the death penalty or in selecting the jury that sentenced the defendant, or one or more of the jurors acted with discriminatory purpose in the guilt-innocence or sentencing phases of the defendant's trial."

But the Racial Justice Act provides that a remedy is available to white defendants who prove that discrimination occurred in other parts of the state in other decades to other defendants who were discriminated against. Can you believe it? As a result, 152 of the 156 murderers then on death row filed motions for relief under the Racial Justice Act.

Before the Act was passed in 2009, we predicted (accurately) that almost every person on death row whether white, black, or Indian would take advantage of it. We predicted (inaccurately) a minimum additional time in court of two or three years (which has now been 11 years.) The delay will likely go on for another five or ten years under the Supreme Court's latest opinion.

Since the modern era (1976) when our death penalty statutes were reformed to comply with U.S. Supreme Court decision, there has not been a single execution of a person who had any claim to factual innocence. Yet that canard is why we have effectively had a 14 year moratorium on death sentences for first-degree murderers.

Not everything proposed or enacted in the name of "racial justice" is worthy of the name.

Paul 'Skip' Stam was a member of the North Carolina House of Representatives for 16 years and either managed or authored the reform and then repeal of the Racial Justice Act as Majority Leader of the House and then as Speaker Pro Tempore. He is chairman of the Board of Directors of the Civitas Institute.