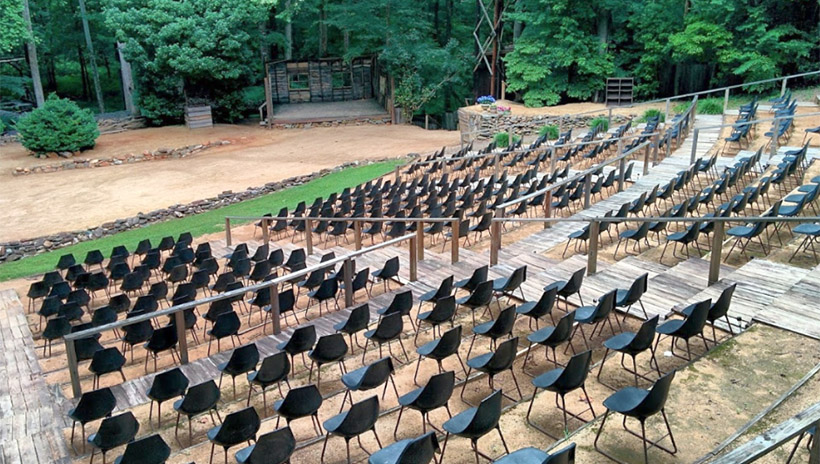 Winter is coming, and small businesses are running out of time.

Gov. Roy Cooper's "Phase 3" of COVID-19 shutdowns has left small venues out in the cold, even as he announced he'll reopen at 7% capacity any large outdoor venues that can hold more than 10,000, starting Friday, Oct. 2.

Smaller venues aren't so fortunate. Cooper will let them use 30% of their outdoor capacity or 100 guests, whichever is smaller. For many venues, that means reopening in name only.

Cooper will allow 5,286 fans back inside the Bank of America stadium in Charlotte.

Outside seating is the only economic lifeline for The Orange Peel, a live music venue in Asheville. Indoor business is dead. The venue has already forgone millions in revenue, and winter threatens to freeze any remaining income from outdoor seating.

The Orange Peel has the space to host 500 people outside with social distancing at Rabbit Rabbit, an outdoor venue and food truck. But it can't. The venue qualifies for the restaurant loophole in the lockdowns, but Cooper's regulations require that customers sit. Venue owners can't afford to invest in hundreds of tables and chairs.

Most of The Orange Peel's staff is gone. Soon, even the recovered jobs will be at risk.

"Everyone is trying to make hay while the sun shines," venue manager Liz Whalen Tallent told Carolina Journal. "We're trying to do the math, and trying to come up with a plan to keep the building."

If Cooper extended the 7% capacity to smaller venues, The Orange Peel could sell another 30 slots. But the business is too small to dodge his 100-person limit on attendance. The Orange Peel hopes to lure customers in for winter events.

"Those big venues are a whole other animal than small businesses," Whalen Tallent said. "They can literally borrow money from other countries. ... If you're a small business, there's a limit to how much money you can loan yourself."

It's too late to recover the 2020 season. The logistics of booking national artists take time, and venues don't have that. The Orange Peel couldn't bring back national artists until after February, even if the virus disappears tomorrow, says Whalen Tallent.

"The whole industry has been devastated," Whalen Tallent said. "The infrastructure isn't there. You can't turn it back on like a switch."

It could be years before Bryan Wilson can scrape together the money to reopen the Snow Camp Outdoor Theatre in Alamance County.

The shutdowns cost Wilson dearly. He lost so much money he can't reopen without raising $100,000 — no small price tag for a 600-person theater that survives with donations.

The entire staff is gone. The theater is empty. Wilson tries to keep the grass cut and the lawn clean. The theater is his father's legacy, and Wilson hopes it will be open for its 50th anniversary in 2024.

The theater had a restaurant, but it burned down in December - five months before Cooper exempted restaurants from the shutdowns.

"This entire year has been a wash," Wilson said. "I'm not sure how long we can stay without some type of help. ... We don't want this to be the end."

But for many event venues, it will be.

Winter is coming, and venues are already deep in debt. Many took a financial hit from reimbursing tickets to canceled shows. The Orange Peel could spend the next decade paying off loans. Motorco Music Hall in Durham is bracing for colder weather and slashed capacity.

"We've taken every government loan that's available, stupidly, but we've done it," venue owner Josh Wittman told CJ. "We're into the government pretty deep. Granted, we don't have to pay for a few years — maybe everybody will go out of business before we have to repay it."

For The Orange Peel, money from the Paycheck Protection Program is mostly gone. Whalen Tallent describes the federal Economic Injury Disaster Loan as a "joke" or a "fiasco." After repeated system glitches, she received 1% of her requested funding.

The shutdowns have left her with few options.

"It's very hard to get business loans when the bank looks at your books and you've made $0," Whalen Tallent said. "A lot of business owners have put up their homes, so now you're taking money from families. ... It's pretty dire for business owners."

Motorco has managed to claw back 30% of its business from before the pandemic. But much of that revenue comes from outside seating and events. It won't last the winter.

Wittman expects a "mass exodus" of business closings in January.

The Orange Peel has kept a skeletal schedule for 2021. But that schedule inspires as much fear as hope. If capacity restrictions remain, venues will have to renegotiate their contracts — and cancel customers' tickets. That means paying out more refunds, without any real source of funding.

To make indoor shows financially feasible, The Orange Peel would need to be able to host 150 people inside. The state limit is 25.

"Venues are dropping like flies," Wittman said. "I don't see anybody being able to sustain rent at the reduced seating. And once you lose outdoor seating, it's going to put a major crush on these businesses."