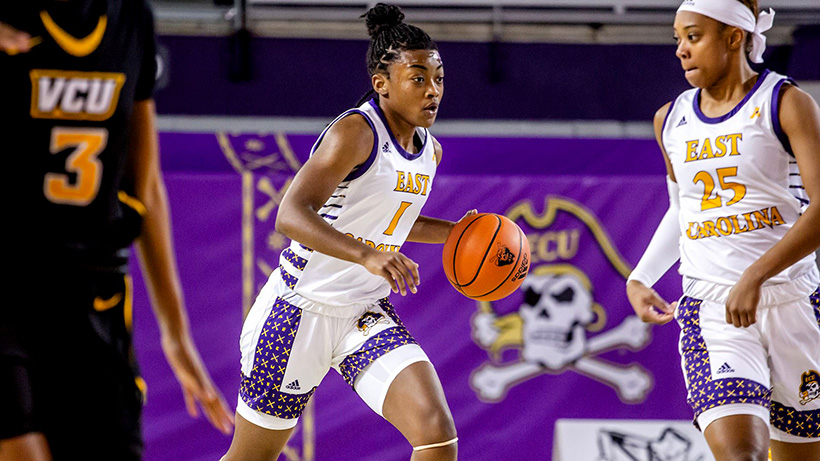 GREENVILLE, N.C.     Trailing VCU by six going into the fourth quarter, East Carolina dug in defensively and held the Rams to a pair of points in the final 3:46, securing a 58-55 non-conference victory over the Atlantic 10 Conference preseason favorite Wednesday evening inside Williams Arena at Minges Coliseum.

The Pirates (2-3) wrapped up non-conference play while VCU (2-4) lost its second-straight contest on the road.

"We got better tonight," head coach Kim McNeill said. "It wasn't pretty for 40 minutes, but I really saw us focus on some of the things we've been working on the last couple of weeks — especially the last few days. Executing our offense. Running all the way through our stuff and creating easy opportunities for each other. We did a really good job of that tonight. We had some people step up and hit some big shots."

The Rams welcomed back leading scorer and preseason All-Atlantic 10 team selection Tera Reed from injury and the New Zealand native paced the side with 13 points. Taya Robinson matched her teammate, netting 13 points while also contributing six assists and six rebounds.

ECU turned in its best shooting performance of the young season, converting 24 of 59 (40.7 percent) attempts from the field. Conversely, VCU knocked down 21 of 47 to fire at a 44.7-percent clip. The Pirates won the rebounding battle 35-32 and grabbed 15 offensive boards which they converted into 12 second-chance points. East Carolina forced the visitors into 19 turnovers, leading to 11 steals. In terms of sharing the ball, ECU compiled a season-high 15 assists.

The Pirates got off to a cold start from the field, knocking down just two of their first eight shots as VCU jumped out to an 8-4 advantage at the 4:58 mark of the first quarter. East Carolina's defense clamped down from there. With the Rams ahead 9-4, Monk nailed a triple then scored off a steal to knot the score at nine. A triple by freshman guard Alexsia Rose gave ECU its first lead of the day, 12-9, with 51 seconds remaining in the stanza and the teams traded buckets from there, leaving the Pirates with a 14-11 edge heading into the second period.

East Carolina extended its lead to 21-16 midway through the second stanza following a driving layup by Claytor, but VCU dropped in five quick points to tie the score once more. The Rams stretched the upper hand to 26-21 off a Janika Griffith-Wallace three-pointer, prompting a timeout from the Pirate bench, and it re-energized the home side as the Pirates ended the half on a 9-0 run to take a 30-26 advantage into the break.

Thompson led all scorers in the first two quarters with 11 points while Robinson was tops for the visitors with nine. ECU went 13-of-27 (48.1 percent) from the floor and out-rebounded VCU, 18-15.

The Rams raced out of the gates in the second half, hitting five of their first six shots from the floor to pull ahead 38-34 with 5:41 on the clock. A Reed three made it 41-34 before two free throws by Sydnei Archie gave VCU its largest advantage of the game, 47-38, at the 1:15 mark. The Pirates shaved a little bit off of their deficit in the closing moments of the stanza as a Monk driving layup with four seconds left reduced the Rams' lead to 48-42.

Thompson provided the initial points of the final period, draining a three to pull ECU within 48-45. Robinson cashed in on a layup with the clock reading 5:19 to push her side back ahead 52-47. However, East Carolina really locked in from there. Another big three by Thompson made it a one-point contest in favor of VCU at 53-52 and a three-second violation gave the ball back to the Pirates with 2:46 remaining.

A nice driving layup by Claytor on the ensuing ECU possession sent the Pirates into the lead, 54-53. They would not relinquish control the rest of the way. The teams traded missed buckets before Robinson converted in the paint to draw the Rams within 56-55 with 16 ticks of the clock left. Monk would seal the deal with a pair of free throws as VCU's two three-point attempts fell short in the game's final eight seconds.

"We've been focusing on playing together and playing for each other," McNeill added. "We were doing too much quick passing. Quick pass. One shot. That's not who I want us to be. So, I thought we grew in that area. With 28 seconds to go, I felt good and confident because we hang our hat on defense. I told them in the huddle that we are exactly where we want to be because we are going to get one stop, rebound the ball and finish this thing out."

Up Next: East Carolina begins its seventh season of American Athletic Conference play with a matchup against SMU Wednesday, Dec. 16 in Dallas, Texas. A tipoff time or broadcast designation has not been announced by the league as of Wednesday night.
Go Back