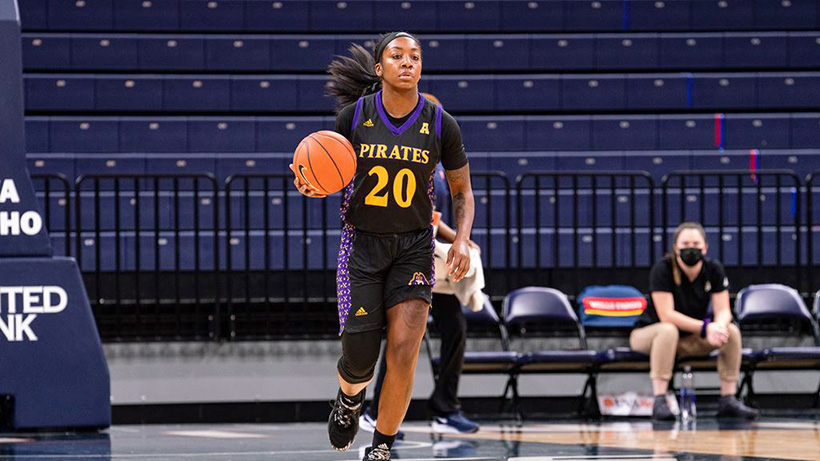 DALLAS, Texas     After missing the previous two games, Sierra DaCosta hit the most important shot of the contest Wednesday evening as her late go-ahead three-pointer lifted East Carolina over SMU 50-46 in both teams' American Athletic Conference opener at Moody Coliseum.

The Pirates (3-3, 1-0 AAC) out-scored the Mustangs (0-5, 0-1 AAC) 17-4 in the fourth quarter and held SMU scoreless over the final 4:29 to post the come-from-behind victory — avenging a season-series sweep by SMU in 2019-20. The Mustangs' 46 points are a season low by an ECU foe this year and the second fewest in head coach Kim McNeill's tenure at the helm of the program.

"It feels really, really good to win this one," McNeill said. "Hats off to SMU. That's a really good team. Athletic guards that can shoot the three or get to the rim. They really caused us problems and had a good offensive game plan.

"Resiliency — that's all I can say about my team. We never hung our heads. We kept fighting. At the end of the day, we are always going to hang our hats on defense. That's what got us back in the game. We held them to four points in the fourth quarter. I kept preaching defend and rebound. Those things allowed us to get out in transition and score some easy baskets."

Junior forward Tiara Chambers matched her career-high scoring output with 14 points while adding nine rebounds and four blocks. It marked the second-straight outing with four rejections for the Virginia native. Senior guard Lashonda Monk also reached double figures in the scoring column, netting 13 points to go along with five assists and six steals. Rhyle McKinney paced the Mustangs with 10 points on the strength of a pair of three-point field goals. BriShonne Tollie grabbed a team-best seven rebounds in 21 minutes played.

East Carolina held SMU to 34-percent efficiency (18 of 53) from the field, marking the lowest effort of the season by a Pirate opponent. ECU knocked down 20 of its 53 attempts to finish at 38 percent. The Mustangs held the upper hand in the rebounding battle, 37-31, but East Carolina forced SMU into 24 turnovers and generated 15 steals — leading to 23 points off of those miscues.

SMU took the upper hand early on, building a 6-1 lead after a free throw by Jahnaria Brown. The Pirates ratcheted up the defense from there, forcing turnovers and converting on the other end. A second-chance bucket off an offensive rebound by DaCosta put ECU ahead 15-12 at the 2:35 mark and the Pirates would settle for a 19-15 advantage after the first quarter following a Mustang free throw with 21 seconds remaining.

East Carolina went cold in the second quarter, missing its first seven shots of the stanza. With SMU ahead 26-19, Monk connected from just inside the three-point line to cut the Pirates' deficit to five. A made free throw by Chambers pulled ECU within 26-24 with 1:45 to go before the half, but the Mustangs had the last word — using a successful jumper by White to head into the break up four.

Chambers notched seven points and four boards to lead the Pirates in the first half while Reagan Bradley netted a squad-high seven for SMU. East Carolina hit 11 of 29 (37.9 percent) from the floor, slightly lower than the Mustangs' 40.7 percent (11 of 27), and SMU enjoyed a healthy 22-12 on the glass — a total which included nine offensive rebounds for the homestanding Mustangs.

A three-pointer by McKinney saw the home side push its lead up to 10 points at 37-27 before Chambers and Synia Johnson scored down low to make it a six-point contest at the 5:34 mark. The Pirates couldn't draw any closer the rest of the way as SMU carried a 42-33 advantage into the final 10 minutes of play.

A second-chance jumper by McKinney put the Mustangs up by 11 early in the fourth period, but Ryann Evans answered just seconds later to get ECU within single digits once more. All told, the Pirates went on a 9-0 run to slice the SMU lead to 44-42. Tollie ended the run with a turnaround jumper that left her team with a 46-42 edge with 4:53 remaining in the contest. However, that would be the final time the Mustangs would scratch the scoreboard.

After a SMU offensive foul, Chambers converted a layup to make it 46-44 in favor of the Mustangs with 2:50 to go. East Carolina continued to dig in defensively, tallying timely stops and giving itself a chance to regain the upper hand. The Pirates did just that as Johnson received the ball in the right corner and dished it to a wide open DaCosta who coolly drained a triple from well beyond the line to send ECU into the lead at 47-46 with just 15 ticks on the clock.

SMU took a timeout and received the ball in the frontcourt. However, Monk made a nice read and stole the inbounds pass. The Mustangs fouled her, and she stepped up to the free throw line, confidently hitting both attempts to extend the East Carolina edge to three points with 11 seconds remaining. Jayla Brooks attempted to tie the game, but her three-point attempt was no good and Chambers pulled down the final rebound. With two seconds to play, she hit one of two free throws after getting fouled to seal the comeback win.

"I'm so excited for this team," McNeill added. "We'll continue to move forward. I think we have a bright future, but we have to keep working every day, stay hungry and improve."

Up Next: ECU remains on the road for their second league contest, traveling to the Buckeye State Saturday (Dec. 19) for a matchup with Cincinnati at Fifth-Third Arena. The teams will tip off at 1 p.m., and the game will be streamed live via ESPN+.
Go Back