ECU's Comeback Effort Falls Short Versus USF | Beaufort County Now | David Collins had 16 points and Justin Brown scored all 12 of his points after halftime to lead USF past East Carolina 69-63 inside Williams Arena at Minges Coliseum on Saturday. 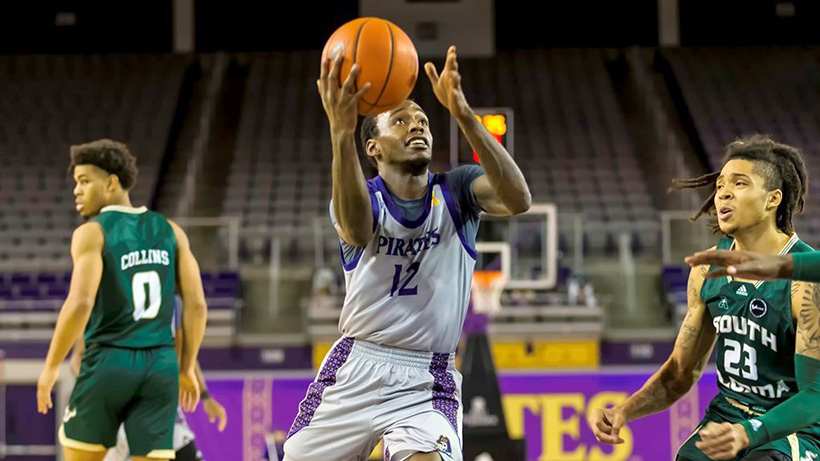 GREENVILLE, N.C.     David Collins had 16 points and Justin Brown scored all 12 of his points after halftime to lead USF past East Carolina 69-63 inside Williams Arena at Minges Coliseum on Saturday.

Brown made three consecutive 3-pointers and Collins added a fourth straight to ignite a game defining 14-2 runs that propelled the Bulls to a 43-34 lead with 14:34 to play. USF (7-5, 3-3 American) stretched its lead out to 13 over the following six minutes and found itself ahead 67-54 with 2:49 remaining.

ECU (7-3, 1-3 American) trimmed its deficit to four in a span 1:04, scoring nine unanswered points. Tremont Robinson-White start the run with his third of three 3-pointers on the night.

Robinson-White finished with a career-high 29 points on 9 of 14 shooting from the field, including 3 of 6 outside the 3-point arc, and 8 of12 at the free throw line.

The Pirates scored their final points on a baseline jumper from J.J. Miles with 53 seconds left, but came up empty on its next three possessions despite holding USF without a point until Brown made a pair of free throws with 1.3 seconds to play to determine the final score.

The Bulls earned their fourth win in the last five meetings against the Pirates and second straight.

ECU led by one at halftime, 26-25, after Robinson-White hit two free throws with less than two seconds remaining in the half. The Pirates shot just 25 percent in the opening stanza, while USF connected on 33 of its field goal attempts.

The largest lead by each team in the opening half was five points.

POSTGAME QUOTES     "We've got to give credit to South Florida for that stretch to start the second half. I thought we had a decent enough start. Brown got on a little bit of a roll, they made four straight 3s and we put ourselves in a little bit of pinch. We had some stretches where we did some really good things and some stretches where we played some really bad basketball. We've got to clean that up quickly." — ECU Head Coach Joe Dooley

"It was a slow-paced game, not really our style. They went on a bigger run (in the second half), but then we came back and were almost able to finish up the comeback. But that was a tough one, a tough one." — Jayden Gardner