Australia | Beaufort County Now | "Australia," brought to us via the big screen by Director / Producer / Writer Baz Luhlmann, was epic in scale while concentrating on a pivotal time period (1938 to 1942) in the young history of the former British Colony - Australia.

Through the Eyes of a Child an Epic is Born

"Australia," brought to us via the big screen by Director / Producer / Writer Baz Luhlmann, was epic in scale while concentrating on a pivotal time period (1938 to 1942) in the young 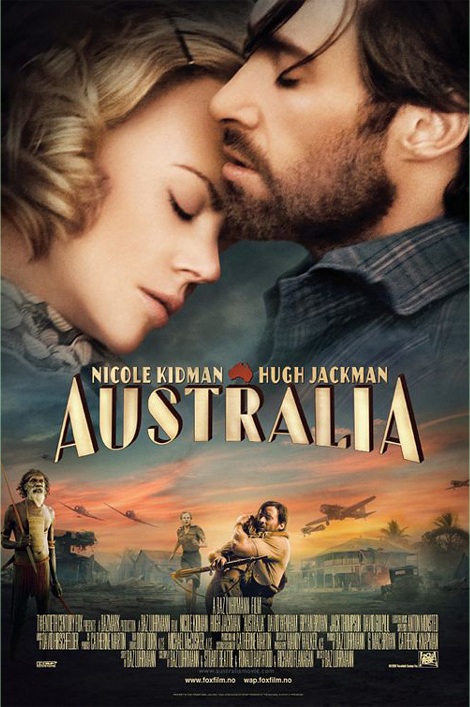 history of the former British Colony - Australia. Many epics have been made since D.W. Griffith's "Birth of a Nation" and most have a cogent message against the backdrop of a sweeping panorama under difficult circumstances. The film "Australia" is no different.

"Australia" concentrates on the era when most of the world was facing the threat of an imminent world war. Australia, isolated by its geography from Germany's aggression in Europe and Japan's aggression in China, appeared more as a bystander and not a combatant. That all changed when the United States' Pacific Fleet was attacked by the Empire of Japan at Pearl Harbor on December 7, 1941. Before that event, the British nation was the only bastion of freedom willing to fight the Axis Powers in the Orient as well as western Europe. What few cattle ranchers that could raise cattle in the arid northern Australia had a near monopoly on that supply of protein to feed the British Army in 1938 / 39. Darwin bovine baron, King Carney, played by Australian actor Brian Brown, and the widow, Lady Sarah Ashley, played by fellow Aussie Nicole Kidman, the owner of the adjoining ranch, Far Away Downs, were the only competing producers and therein lied the conflict for this story. 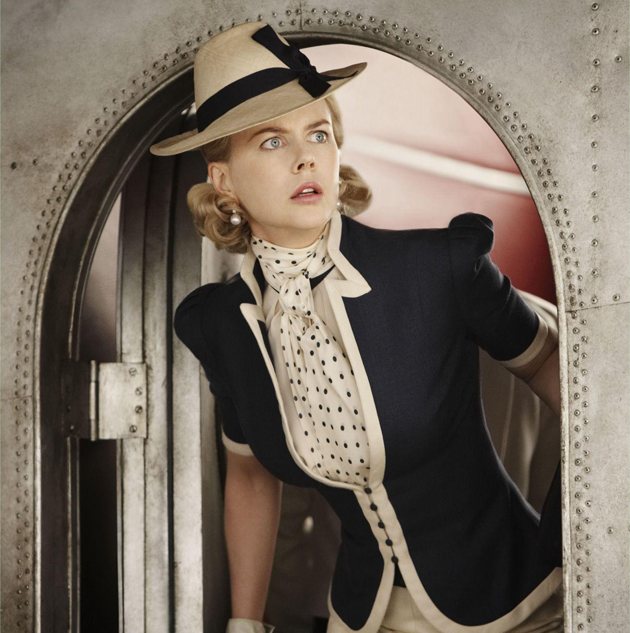 Lady Sarah Ashley, played by Nicole Kidman, makes he r grand entrance upon the rugged landscape of Australia, and, initially, finds it more than she bargained for: Above. Drover, portrayed by Hugh Jackman (left) with Nullah, Brandon Waters (right), leads the quiet group of aboriginal children to safety from the occupying Japanese forces: Below. 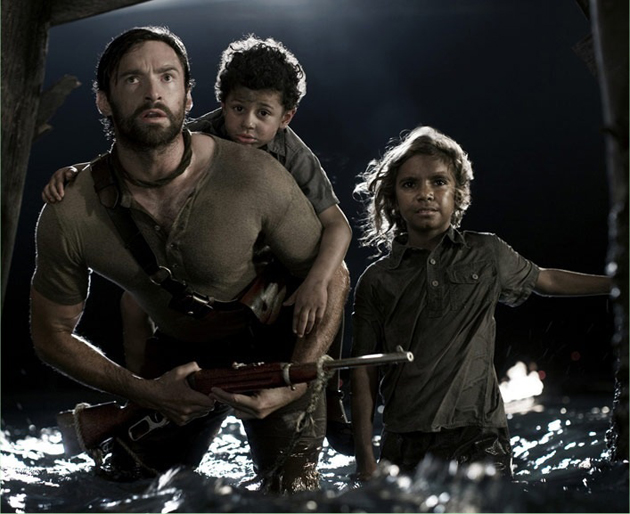 What breathed life into this story, that needed much resolution, was that it was told in the first person of a mixed Aboriginal and Caucasian boy name Nullah, played by precocious first time actor Brandon Walters. Nullah lived his 11 years on the fringe of society: unschooled, unwanted and fatherless. Fathered by the King Carney shill, Neil Fletcher, portrayed by Australian actor David Wenham, Nullah had always lived on the expansive Far Away Downs, where he was taught the story of life by his aboriginal grandfather, King George. His Grandfather, played by Aboriginal actor David Gulpilil, guided him through the mysteries of maturation until he would be ready for his "Walkabout." The "Walkabout" would be months of exploring the Australian outback with his grandfather as he searched for "the story" of his life. 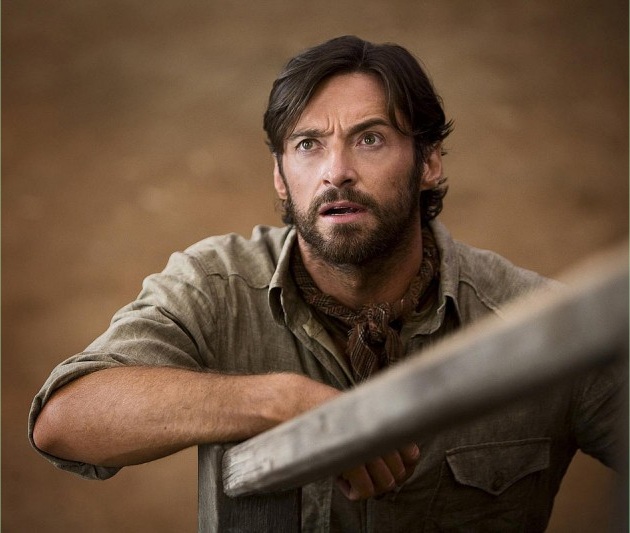 Drover, Hugh Jackman, discovers that possibly his association with Lady Sarah Ashley may be a larger endeavor than he bargained for: Above. Nullah, Brandon Waters (left), finds his spot in a reluctant Lady Sarah Ashley's (right), heart: Below. 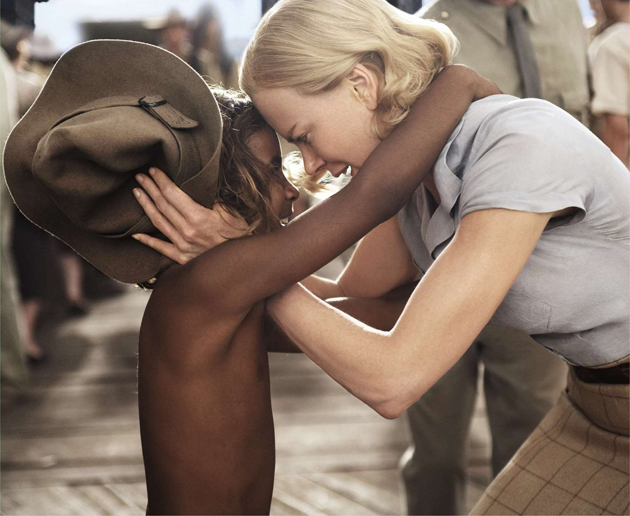 Young Brandon Walters was outstanding as the precocious Nullah, who as a child, sought not only the answers for his life, but for those around him. He was the spark with the grist to bring the reluctant Lady Ashley to compete with King Carney to drove what cows had been scattered, by the former ranch boss Neil Fletcher, to the docks of Darwin. All she needed besides Nullah was whomever they could scrounge remaining around the ramshackle ranch not fired by Fletcher as his parting shot, and a drover to manage the cattle drive. The ranch's alcoholic and corruptible accountant, Kipling Flynn, adroitly portrayed by Australian character actor Jack Thompson, certainly was no drover, but, a man named Drover played by Australian leading man Hugh Jackman was begged by Lady Ashley to be the catalyst to her success. Do you detect the thread that all of the major actors are native Australians? I'm just surprised that Cate Blanchett, Guy Pierce, Toni Collette, Russell Crowe and the "Breaker" Edward Woodward did not perform cameos. 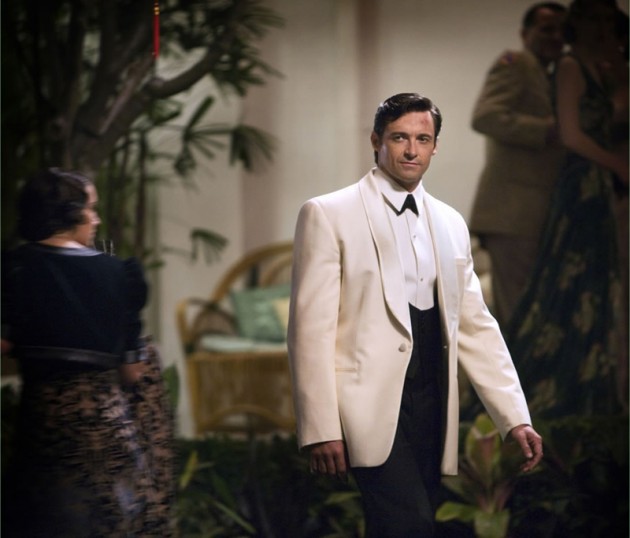 Like all great romantic epics, the story must embellish the subplot that both partners creating all that romantic tension must at some point manifest their elegant side. Drover, Hugh Jackman: Above. Lady Sarah Ashley, Nicole Kidman: Below. 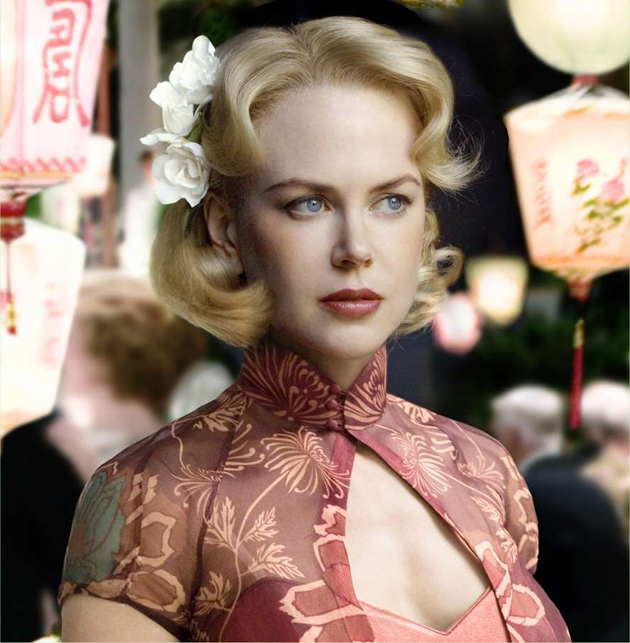