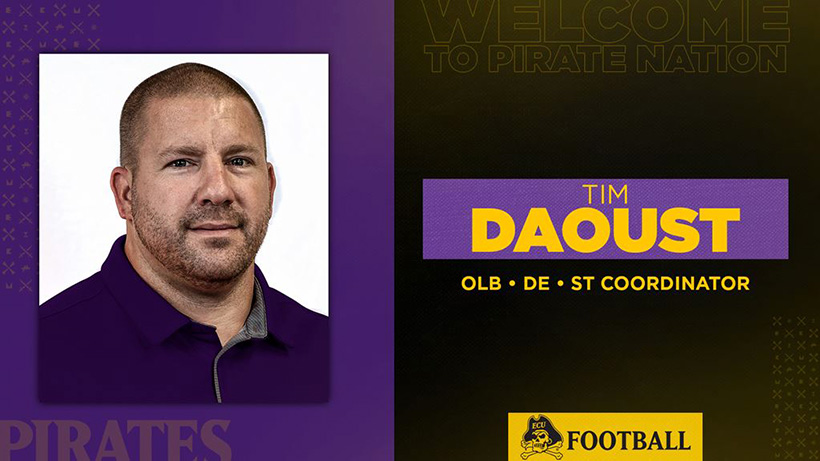 GREENVILLE, N.C.     Tim Daoust (DOWST) has been named defensive ends and outside linebackers coach in addition to special teams coordinator at East Carolina University according to an announcement from head football coach Mike Houston on Monday.

He brings 19 years of overall Division I coaching experience to the Pirates' staff, including six seasons as a unit coordinator at the FBS level. Daoust's appointment at ECU comes after successful stops in the Big East, Atlantic Coast and Mid-American Conferences, and most recently, a promotion to assistant head coach after one season at Sam Houston State prior to a COVID-19 postponed 2020 campaign.

"Tim is a perfect addition to our program and the direction it is headed," Houston said. "He brings a level of enthusiasm that is contagious and his background exemplifies cultivating relationships that motivate young men. I don't think there's any doubt about Tim's ability to not only identify talent, but to successfully develop it as well. We're thrilled he is a Pirate."

Before joining the SHSU staff, Daoust served as special teams coordinator at Syracuse from 2013 to 2015 before leading defenses at Ball State (2016) and Western Michigan (2017-18).

During his two-year defensive leadership role at Western Michigan, which followed an earlier three-season stint in Kalamazoo from 2006 to 2009, Daoust also worked with both the safeties and hybrid linebackers. The Broncos consistently ranked among the top units in the MAC statistically, leading the league in fumbles recovered and standing second in total takeaways, turnover margin, tackles for loss and third down defense to name a few. WMU also produced three All-MAC picks in 2017 and two of Daoust's players were chosen in the 2018 NFL Draft.

His first contest at Western Michigan was a memorable one as the Broncos netted two interceptions and a pair of sacks on the road against No. 4 USC and future No. 3 overall draft pick Sam Darnold. Three games later, Daoust's unit recorded 13 tackles for loss — most since 2003.

Daoust spearheaded a complete rebuilding project at Ball State in 2016 and guided one of the most improved defenses in the league as the Cardinals finished first in fourth down defense (7th in 2015), second in TFLs (12th), second in sacks (11th) and third in rush defense (12th).

Prior to his appointment at BSU, Daoust was at Syracuse for five seasons serving as defensive ends coach in 2011 and defensive line coach in 2012 before adding assistant head coach and special teams coordinator to his title from 2013 to 2015. While with the Orange, he was part of two bowl championships (2012 Pinstripe Bowl, 2013 Texas Bowl) and a co-Big East title in 2012.

He coached two Syracuse defensive linemen who were selected in the NFL Draft - Jason Bromley (2014/3rd round/N.Y. Giants) and Chandler Jones (2012/1st round/New England Patriots). He also mentored the No. 2 ranked punt returner in the nation in 2015, Brisly Estime, who averaged 18.1 yards per return, and First-Team All-ACC punter Riley Dixon, who would later be selected by the Denver Broncos in the seventh round.

Additionally, Syracuse's defense scored the most non-offensive touchdowns in the ACC in 2015 (six) and was the only squad nationally that did not allow an individual 100-yard rusher in 2013.

Before a two-year stay as Central Michigan's defensive line coach, Daoust was part of a Western Michigan staff during his first tour of duty in Kalamazoo that set the previous high for most wins in a season in 2008 with nine, before that mark was surpassed in 2016. His 2006 squad led the nation in both interceptions (24) and sacks (46), while ranking sixth at the FBS level in rush defense (76.1 ypr) on the way to an International Bowl appearance.

Daoust began his coaching career at Northern Illinois in 2002 as a defensive graduate assistant before moving to Illinois State as cornerbacks coach in 2004 and Cincinnati as a defensive staff assistant in 2005.

As a player, he earned four letters as a standout defensive end at Wittenberg (Ohio) from 1998 to 2001. While with the Tigers, he posted 27.5 career sacks - the second-highest total in school history. In all, Daoust was a two-time captain and had a four-year record of 45-5 with four league titles and four appearances in NCAA Division III Playoffs.

Daoust, 42, is married to the former Jen Emming and they are the parents of three daughters - Leona, Nora and Josephine.