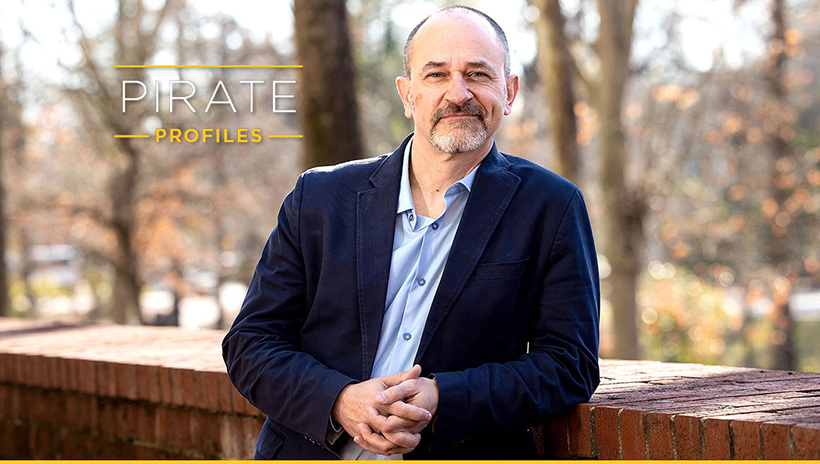 Photo: Rhett Butler
Dr. Ciprian Popoviciu has been to the top of the world, literally.

The assistant professor in the Department of Technology Systems reached the peak of Mount Everest on May 22, 2008, with climbing partner Vance Cook. Now, Popoviciu pushes East Carolina University students to reach new heights in the world of technology. 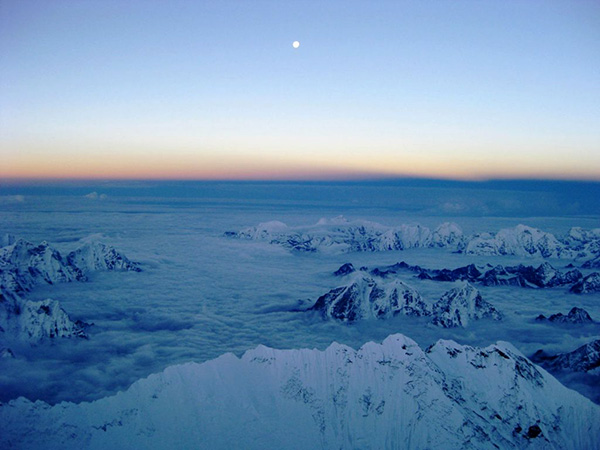 Dr. Ciprian Popoviciu, associate professor in the Department of Technology Systems, took this picture from the top of Mount Everest in 2008. | Photo: Contributed
"Getting to the top is rather humbling," Popoviciu said of climbing the tallest mountain in the world at 29,032 feet. "It was beautiful. It was quiet. I tried to take it all in. It is a long project. You get some gnarly moments, but when mountains reward you with a summit, it is always epic in its own way.

"During that trip, I did a project with the kids of a middle school in Raleigh, a project I absolutely love, a testament to the imagination, creativity and thirst for knowledge of both students and teachers."

Popoviciu grew up in the town of Cluj-Napoca in communist Romania. He describes restrictions on freedoms, extreme food shortages and cold winters because of a lack of electricity to heat homes. He studied for his highly competitive collegiate entrance exam by candlelight. In college, he participated in protests and the revolution that eventually ended communist rule in Romania in 1989.

"For a person of college age, it was exalting despite the chaos," he said. "After the revolution, I was elected to be the student representative in the university senate, an unexpected opportunity that gave me visibility into the challenges of an educational system and the challenges of modernizing it."

A passion for advanced research led him to the United States, where he pursued a doctoral degree in physics at the University of Miami. While there, he took a course in information theory and later computer networking and coding. He landed a job at Cisco Systems, launching a new career.

"Over the subsequent 23 years, I had the opportunity to work with amazing engineers and on interesting projects that only enhanced my passion for technology," Popoviciu said.

Having taught courses at the University of Miami, he enjoyed working with students and served as a guest lecturer at many universities during his time in industry.

"I realized how much I enjoyed teaching only after I stopped doing it, so I slowly returned to teaching little by little," he said.

An admitted skeptic of a higher education system that he said wasn't doing enough to prepare students for careers in a changing job market, Popoviciu rose to the challenge. As a member of the industry advisory board for the Department of Technology Systems, he learned ECU was doing its part to improve society by properly educating students.

"Over the years, I had the opportunity to know the team in the department and to see that this industry advisory board was not just a certification check box, that they were genuinely interested in aligning the program with the needs of the industry and in improving the program to the benefit of the students," said Popoviciu, who has been teaching at ECU for a year and a half. "This alignment of philosophy and priorities made it a natural fit for me. Because of its focus on students, its commitment to community involvement and to modern teaching methods, ECU is uniquely positioned to stand out as an educational institution. This position should become even more apparent as we navigate the difficult and uncertain times of this pandemic." 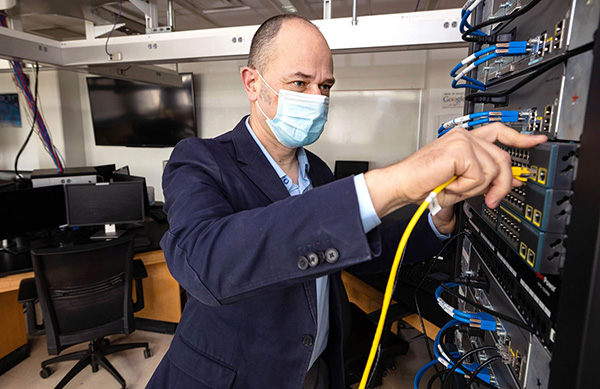 Dr. Ciprian Popoviciu works in a classroom in the Science and Technology Building. | Photo: Rhett Butler
Popoviciu relies on his experience in industry as the backbone of his instruction, hoping to help students ascend to top jobs in technology.

"I firmly believe knowledge can be taught but not experience," he said. "The most value I can provide students is sharing my experience related to technology development, technology integration and technology commercialization. I want to provide students with context for the knowledge they are acquiring, context that will enable them to absorb additional information and keep up with the rapid changes in technology. Regardless of the topic we cover, a systems, operational perspective on technology will help students be effective in their careers."

That experience includes being a part of a startup company that focused on IPv6, the next generation of internet protocol that is expanding on the foundation of IT cyberinfrastructure. He worked with others on standards, training, certification requirements and even a few patents, and is part of the IPv6 Hall of Fame.

Popoviciu has served as an expert in Next Generation Infrastructures for the European Commission, reviewing research proposals and projects. Through this, he was invited to establish ECU as a node in two projects funded by the European Union, one of which allows top European researchers an immersive experience in the United States.

Last year, he received a three-year grant from the National Science Foundation to work with George Mason University on a transatlantic cyberinfrastructure ring to allow for high-speed transmission of research data.

Popoviciu admits to difficulties with teaching and student learning during the pandemic but would rather — naturally — look up.

"We are definitely living through challenging times, and as always, the most adaptable, the most resilient will be able to thrive," he said. "If we stay focused and we stay resolute, we will leap forward. At the same time, I hope the distance placed between us will remind us, will underline for us the value and the importance of relationships, of community, of things that are bigger than one individual. We should not let this crisis go to waste in terms of either our professional development or in terms of our personal growth."

Last thing I watched on TV: "The Queen's Gambit"     First job: Teaching assistant at the University of Miami     Guilty pleasure: Pistachio ice cream     Favorite meal: Tapas in Barcelona     One thing most people don't know about me: I climbed Mount Everest.