Pirates Face Quick Turnaround Against SMU | Beaufort County Now | On the heels of a road loss at Memphis on Saturday, East Carolina jumps right back into action Monday afternoon at home against SMU. 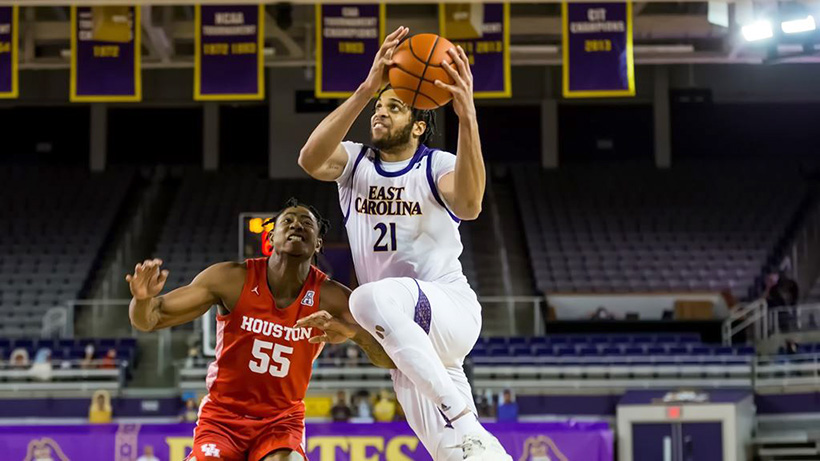 On the heels of a road loss at Memphis on Saturday, East Carolina jumps right back into action Monday afternoon at home against SMU.

The Pirates got 23 points and nine rebounds from Jayden Gardner and 10 points from Brandon Suggs, but couldn't hold off Memphis in the game's final four minutes. The Pirates led by six midway through the second half before the Tigers tied the game with 3:47 to play and finished on a 13-5 run for a 66-59 victory.

ECU, who sank 11 of 24 3-point attempts in its upset over No. 5 Houston earlier in the week, was just 1 of 13 outside the arc with the Tigers hitting 8 of 22 triples. The Pirates held Memphis to just 39 percent shooting overall but were unable to overcome a cold shooting night from the perimeter.

"Of the 13 we probably had nine good looks and a couple that were forced late in the clock and that happens, but we've got to be able to run the offense a little bit crisper," Pirate head coach Joe Dooley said. "Jayden was good as usual and I though Ludgy (Debaut) gave us some good effort and Brandon was banged up, but he had a good start in the first half."

Gardner has scored at least 20 points in each of the last four games and is second in The American in scoring (17.7 ppg) and rebounding (8.6 rpg). J.J. Miles is the only other Pirate to average double figures with 10.3 points per game. Miles is averaging 11.7 points and shooting over 45 percent from the field the past three games.

SMU hasn't played since scoring a 65-63 road win over Tulsa on Wednesday. Kendric Davis and Feron Hunt each posted a double-double with Davis scoring 22 points and dishing out 10 assists, while Hunt had 10 points and 12 rebounds.

The Mustangs are one of the top offensive teams in The American, boasting the conference's top shooting team with a 45.9 field goal percentage and rank second in points per game (74.5), 3-point field percentage (.351) and 3-pointers made per game (7.6).

SMU posted a 70-55 win over ECU in Dallas earlier this season as Davis scored 17 points with Hunt scoring 11 points and grabbing 10 rebounds. Gardner had 13 points for the Pirates, who've lost the last two with the Mustangs, both in Dallas.

However, the Pirates won the last meeting in Greenville as Tristen Newton sank the game-winning 3 with under a second remaining for a 71-68 ECU victory.
Go Back