You should read this if you still believe the 2020 election was legitimate | Beaufort County Now | Voting machine deleted 6% of each Republicans vote. Biden won. | New Hampshire, voting machines 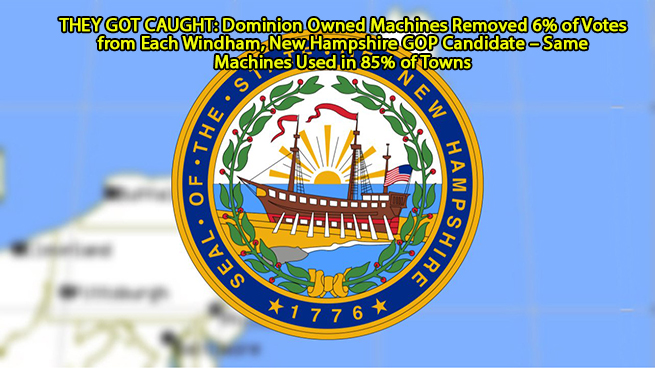 Jim Hoft of the GatewayPundit.com reports:

Here is a major update to our report on Wednesday on voter fraud in New Hampshire.

As we previously reported —
A recent hand recount in the Rockingham District 7 NH House Race in Windham, New Hampshire, found that the Dominion-owned voting machines shorted EVERY REPUBLICAN by roughly 300 votes.

The Dominion machine counted results were wrong for all 4 Republicans in Windham by almost exactly 300 votes.

The Town of Windham used Dominion machines to count paper ballots and upon a believable hand recount, it was confirmed each Republican was machine-cheated out of roughly 300 votes.

You would think this would have been solved by the Dominion machine company, the Secretary of State, the Elections Unit of the AG’s Office, or the laughable Ballot Law Commission. (Kathy Sullivan, d (Term expires July 1, 2024)

Just like every other state that used machines that alter ballot counts in favor of one political party over another – here we are.

In New Hampshire, he noted, the AccuVote optical scanners used in all communities that have voting machines are an “older technology” and each moderator uses the device’s results tape, at the end of the night, to reveal the results, on a paper “Return of Votes” form. AccuVote devices have been used for more than a quarter of a century in the state and are the only devices approved by the Ballot Law Commission.

“The device was originally manufactured by Unisys, then by Global Elections Systems Inc., which are no longer in business,” Yen said. “The device used in New Hampshire is no longer being manufactured. Dominion (Voting Systems) owns the intellectual property of the AccuVote and its related election management system but does not manufacture the device.”

David told The Gateway Pundit that the Republican candidates in Windham had 6% of their total votes removed by the Dominion-owned voting machines.

According to Dr. Strang, these same Dominion-owned machines are used in 85% of the towns in New Hampshire.

These results are IMPOSSIBLE.

What Democrats did was skim 6% off each GOP candidate in each race where there was a recount.

This MUST BE investigated if we can EVER trust our election process again!

Despite these recent findings New Hampshire Attorney General Anne Edwards, a Republican, has no plans to investigate the alleged voter fraud in the state.