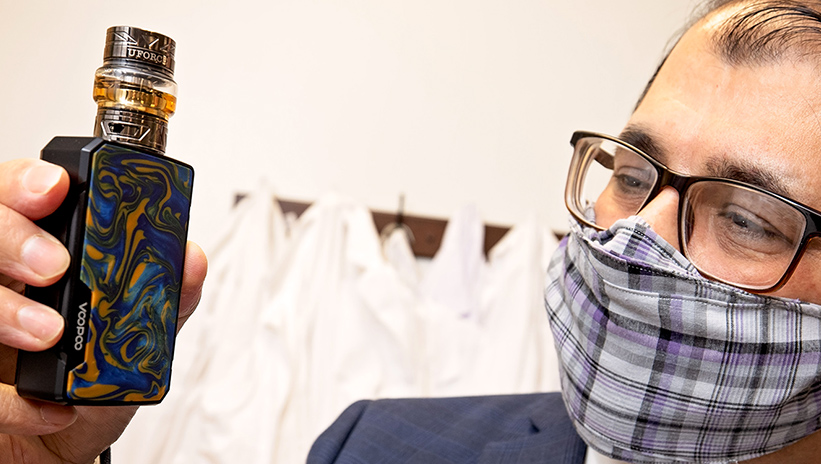 Dr. Lok Pokhrel holds a vaping device in Belk Building. He is working on research about the assessment of inhaled diacetyl from e-cigarettes. | Photos: Cliff Hollis

An assistant professor in the Brody School of Medicine at East Carolina University has quantified the risks of a flavoring compound in electronic cigarettes — the same substance that gives buttered popcorn its flavor.

Dr. Lok Pokhrel, assistant professor in Brody's Department of Public Health, recently published his findings in "The Science of the Total Environment" journal. His paper calls for ramped up regulation of e-cigarette use among teens and adults. 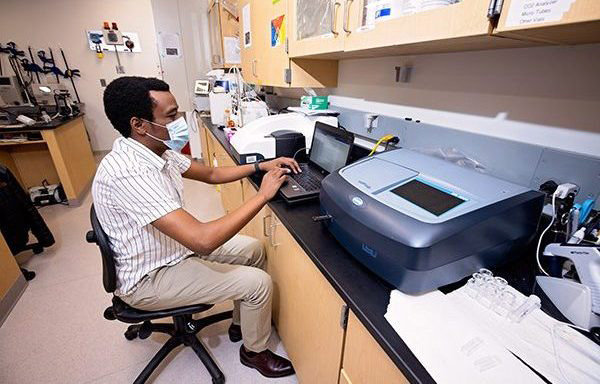 Doctoral student David Wambui works in a lab in Belk Building. He is working with Dr. Lok Pokhrel on research about the assessment of inhaled diacetyl in e-cigarettes.
Pokhrel and two doctoral students, Avian White and David Wambui, published "Risk Assessment of Inhaled Diacetyl from Electronic Cigarette Use Among Teens and Adults," following their investigation of the effects of diacetyl — an organic compound found in foods and additives that are used for dairy flavoring.

It is also a toxicant commonly found as a flavoring component of "e-juice," the flavoring formulas used in e-cigarettes. Diacetyl is found in tobacco cigarettes as well.

"Lung injury in current and former workers in popcorn manufacturing suggests a possible association with diacetyl inhalation exposure," Pokhrel explained. "Although the number of e-cig users continues to rise steadily among the teens and adults, the potential risk of pulmonary disease has not been characterized."

Existing research points toward diacetyl as a culprit of bronchiolitis obliterans, inflammation that leads to irreversible limited airflow in the lungs.

"These results underscore the need to regulate e-cig use among teens and adults to protect them from diacetyl exposures and risk of developing lung injuries including bronchiolitis obliterans," Pokhrel said.

E-cigarettes come in many shapes and sizes. Most devices have a battery, a heating element and a tank to hold a liquid. E-cigarettes produce an aerosol by heating the liquid, usually containing nicotine, flavoring and additional chemicals that help to make the aerosol. Users inhale this aerosol into their lungs. E-cigarette use is also called "vaping."

According to the Centers for Disease Control, e-cigarettes are not safe for youths, young adults or adults who do not use tobacco products. In 2020, 3.6 million U.S. middle and high school students used e-cigarettes in the past 30 days; in 2019, 4.5% of U.S. adults were current e-cigarette users, according to CDC statistics.


"Knowing more about the known toxicity and risk of e-cigarette use will help inform the state and federal regulators to address this public health issue immediately."
– Dr. Lok Pokhrel, assistant professor, Brody Department of Public Health
Several other ECU researchers have also studied e-cigarettes and their use. Last fall, Drs. Eric Soule, Sinan Sousan and Jack Pender were awarded a National Institutes of Health grant to measure second- and third-hand exposure to e-cigarette use inside vehicles as well as conduct an in-depth study on users' behavior.

Soule and Dr. Joseph Lee, both in the Department of Health Education and Promotion in the College of Health and Human Performance, have been studying vaping and marketing of electronic cigarette products. Both have conducted research on the vaping/e-cigarette industry including marketing tactics and potential health effects of using the products focusing on youth and young adults.

Work in Pokhrel's lab focuses instead on measuring the risk associated with e-cigarette inhalants.

"Most of the e-cigs work done by others, including the ECU researchers, are often focused on users' behavior," Pokhrel said. "HQ values as computed in our study for diacetyl exposures from e-cigarettes will inform policy decisions by the U.S. FDA, as the method we used are admissible in the court of law and presents a clear picture of risk and toxicity outcomes from e-cigarette use."

The research also comes on the heels of a rash of 2019 deaths linked to e-cigarette use, which caused the CDC to issue warnings on their use.

"Knowing more about the known toxicity and risk of e-cigarette use will help inform the state and federal regulators to address this public health issue immediately," Pokhrel added.

White and Wambui took part in the research as part of the doctoral course PUBH 7930: Environmental and Occupational Exposure Assessment.

"It's exciting to be a part of a project that has the potential to assist in lessening lung injuries in users of e-cigarettes," said White, a doctoral student and teaching instructor in the College of Health and Human Performance's Department of Health Education and Promotion. "My hope is this research will aid in awareness and the continuation of studies on the potential risks from e-cigarette use."

Wambui, a doctoral candidate in Brody's Department of Public Health, said public health is about exploring public health problems and using evidence to put policies in place to address them.

"This study presented an opportunity for me to apply the skills that I have learned to explore and determine a public health issue," he said. "When I was shopping for a doctoral program, I wanted a program that incorporates environmental health and public health because I think these two are intrinsically interrelated. A true public health professional needs to understand both."
Go Back