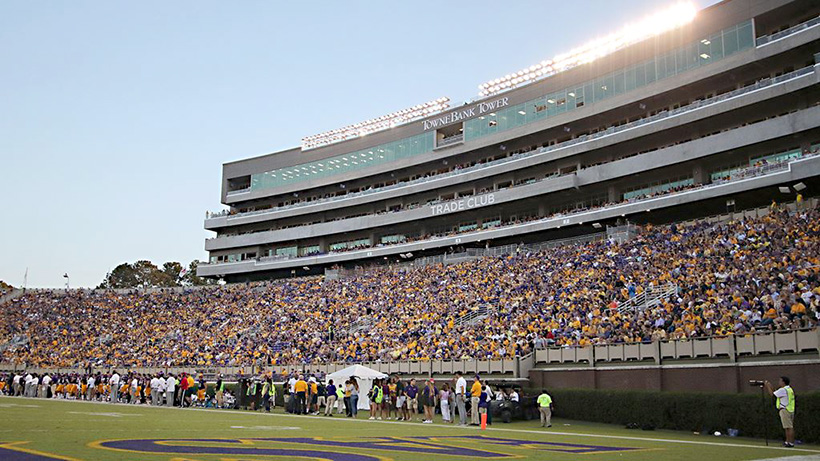 After the Pirates begin the campaign Sept. 2 by renewing their 89-year, 31-game in-state series with the Mountaineers at Charlotte's Bank of America Stadium, the Gamecocks will make their fourth overall visit — and first since 1997 — to Dowdy-Ficklen Stadium on Sept. 11.

In addition to East Carolina's eight league tilts and the aforementioned meetings against Appalachian State and South Carolina, other previously announced non-conference games at Marshall (Sept. 18) and against Charleston Southern (Sept. 25) complete the remainder of the slate.

The American and its primary television partner — ESPN — have initially targeted three ECU home dates among its possible early broadcast selections. The Pirates' contests against the Bulls or Owls could be moved to a Thursday night kickoff, while the finale versus the Bearcats has an opportunity to be played on a Friday. Final broadcast determinations will be made once completed by the league office and the network.

The 2021 schedule offers plenty of balance as both halves are split evenly with three home and three road games that precede and follow a mid-season bye week (Oct. 16). While the Pirates will play two of their first three contests and two of their last three on the road, head coach Mike Houston's third season also features a more favorable stretch with four of six appearances at Dowdy-Ficklen Stadium between Sept. 25 and Nov. 6.

In all, East Carolina will face five opponents who played in bowl games in 2020 on the road this fall, which includes the Mountaineers, Thundering Herd, Knights, Cougars and Tigers. On the flipside, the Bearcats and Green Wave represent the pair of postseason qualifiers who will visit Dowdy-Ficklen Stadium.

"We welcome the expectations that come with the opportunity this schedule provides," Houston said. "It is exciting to start a new season in an NFL venue, having South Carolina at Dowdy-Ficklen Stadium and the exposure the American Conference and ESPN continue to deliver for our program, university and Pirate Nation. The schedule offers us a chance to compete, challenge and achieve, which are reflective of the goals we have in place."

Season tickets for the 2021 season will go on sale beginning March 1. While pricing options will remain the same as last year ($99 to $300 depending on location), additional information and promotional features will be available shortly via ECU's Online Ticket Office and on all ECU Athletics social media platforms.

THE SEC, SOUTH CAROLINA     The meeting against South Carolina at Dowdy-Ficklen Stadium will mark ECU's seventh matchup against a Southeastern Conference opponent since 2011 (and first since dropping a hard-fought 20-15 decision to the Gamecocks in 2016). South Carolina is the only current SEC member to have ever played the Pirates in Greenville, winning two of those three earlier matchups. East Carolina Head Coach Mike Houston also owns a personal 1-0 record against the Gamecocks following The Citadel's 23-22 win in Columbia on Nov. 21, 2015 when he led the Bulldogs' program.

THE QUEEN CITY     East Carolina's tilt against Appalachian State at Bank of America Stadium will be the Pirates' sixth trip (3-2) to Charlotte for a neutral site contest following wins over NC State (1996), West Virginia (1999) and Virginia Tech (2008) along with setbacks to NC State (2004) and South Carolina (2011). ECU's victory over the Hokies drew a then-stadium college football record crowd of 72,169.

OVERTIME ANYONE?     East Carolina and Marshall have certainly enjoyed a competitive series, one that has produced overtime finishes in two of the last three games (and in three of the last six dating back to 2008). The Pirates and Herd have also split a pair of double-overtime thrillers - 2001 (64-61 Marshall/Mobile Bowl) and 2012 (65-59 East Carolina).

STARTING, FINISHING LEAGUE PLAY AT HOME     East Carolina's AAC opener against Tulane will mark the second consecutive year the Pirates begin league play at home, while its regular season finale against Cincinnati is the third-straight campaign in which ECU will finish its slate at Dowdy-Ficklen Stadium.

AMERICAN CONFERENCE CHAMPIONSHIP     The American Conference will conduct its championship game on Dec. 4. The title clash will be conducted on the home field of the highest-seeded team (by order of its regular season finish).

KICKOFF TIMES     Kickoff times for the first three weeks and ECU's possible non-Saturday AAC games will be announced in May, while the remainder will be through the traditional 12-day/6-day process.