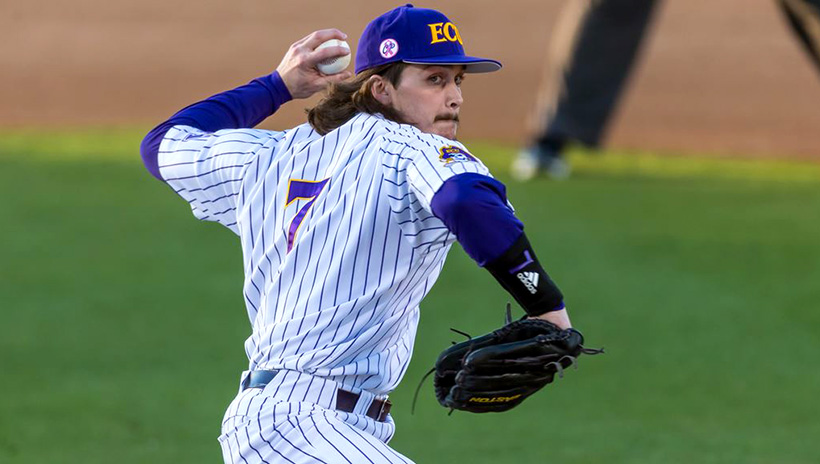 DURHAM, N.C.     Connor Norby's three-run home run in the sixth inning broke a five-all tie and lifted No. 14 East Carolina to a 11-5 win over Duke Tuesday afternoon at Goodman Field inside the Durham Bulls Athletic Park. With the win the Pirates improve to 10-2 on the season, while the Blue Devils dropped to 6-6.

Norby's fourth homer of the season highlighted a four-run frame where ECU took a 9-5 lead. Ben Newton and Ryder Giles both registered consecutive singles before coming around on Norby's long ball. The Pirates would tack on another run on Alec Makarewicz' ground out that plated Thomas Francisco.

ECU jumped out to an early 4-0 lead in the second inning thanks to six two-out hits. Bryson Worrell singled to right field and took second on an error. Josh Moylan followed with an RBI double for the game's first run. Newton laced a shot up the middle plating Moylan. From there, Giles singled, Norby had an RBI single and Zach Agnos capped the inning with a base hit through the right side.

Duke answered with three runs in the home half of the second cutting the lead to one, 4-3. With two away and RJ Schreck standing on first, Chris Crabtree laced an RBI triple down the right field line for the Blue Devils first run. A wild pitch by Spivey pushed across Crabtree. Wil Hoyle belted his first home run of the season, a solo shot down the right field line making it a one-run game.

Seth Caddell's team-leading sixth home run, a solo shot to right-center, in the top of the third extended the Pirates lead to 5-3.

Peter Matt scored from second base in the bottom of the third on Erikson Nichols' fielder's choice coupled with a throwing error by Norby making it a 5-4 ball game. Matt singled with one out, stole second and came around to score during Nichols' at-bat.

Michael Rothenberg's ground-rule double down the left field line in the fourth tied the game at five. Hoyle walked to start the inning and took second on Ethan Murray's single and came around to score on Rothenberg's extra-base hit.

Ryley Johnson's two-out, two-RBI double in the eighth scored Agnos and Francisco pushing the lead to 11-5.

The Pirates pounded out 14 hits in the game getting two each from Caddell, Giles, Newton, Norby and Worrell. Norby tied his career-high with four RBI, while Johnson tallied his first career multi-RBI game.

ECU will be back at home Friday, March 12 when it plays host to Charlotte in a three-game series. First pitch is slated for 6:30 p.m. at Lewis Field inside Clark-LeClair Stadium and will be streamed on ECUPirates.com.