No. 11 ECU Walks-Off UNC, 11-10 | Beaufort County Now | Alec Makarewicz' walk-off RBI single in the bottom of the ninth inning capped a three-hit night and lifted No. 11 East Carolina to an 11-10 come from behind win over North Carolina 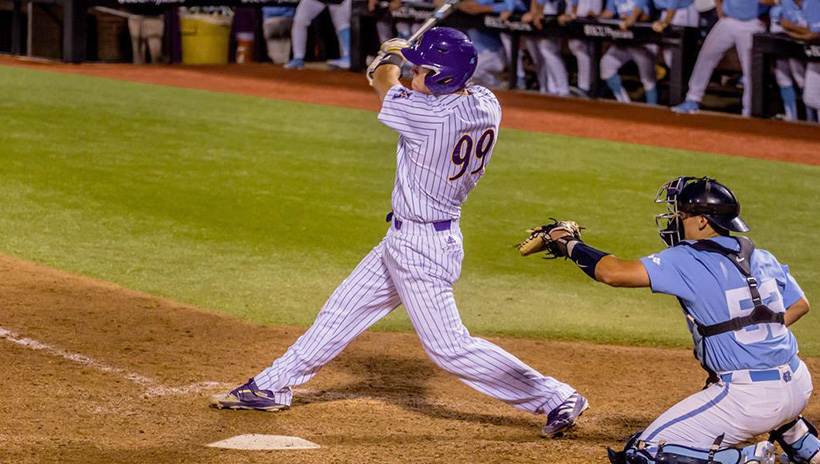 GREENVILLE, N.C.     Alec Makarewicz' walk-off RBI single in the bottom of the ninth inning capped a three-hit night and lifted No. 11 East Carolina to an 11-10 come from behind win over North Carolina Tuesday night at Lewis Field inside Clark-LeClair Stadium. With the win the Pirates improved to 18-5 on the season, while the Tar Heels dropped to 13-10.

With the game knotted at 10-all in the ninth inning, Thomas Francisco singled through the right side with one out, which was followed by consecutive walks by Seth Caddell and Josh Moylan and loading the bases for Makarewicz. On a 2-2 offering from Davis Palermo, Makarewicz sliced a pitch to left field scoring Francisco for the game-winning run, which tied the home-and-home series between the two clubs at one apiece.

UNC jumped out to an early 4-0 lead in the first inning, which was highlighted by Danny Serretti's fourth home run of the season. Justice Thompson led off with a double down the left field line and moved to third on Angel Zarate's grounder to first before coming around to score on Serretti's shot to right field. Caleb Roberts continued the frame with a walk and took third on Tomas Frick's single back up the middle. Johnny Castagnozzi's two-run double to left-center pushed across Roberts and Castagnozzi capping the scoring at four.

ECU responded with a pair of runs in the home half of the first cutting the lead in half, 4-2. Connor Norby, who tied his career-high with four hits, led off with a one-out single then four-straight Pirates reached base in Caddell (walk), (walk), Makarewicz (RBI single) and Zach Agnos (RBI walk).

Roberts' two-RBI double in the second extended the Tar Heels lead to 6-2. Three consecutive walks to open the frame loaded the bases for Roberts' base knock to right center that scored Mac Horvath and Thompson.

The Pirates would tie the game at six-all with a pair of runs in the fourth stanza. Worrell, who had a career-high four hits, singled to right-center and came around to score two batters later on Norby's eight home run of the year — a shot to right field.

UNC regained the lead with a three-spot in the sixth and a single run in the seventh making it a 10-6 ball game. Thompson singled through the left side with one away and scored on Zarate's two-run shot to right field. Two batters later, Roberts homered to right field for a three-run advantage, 9-6. Tyler Causey's solo blast to right field in the seventh capped the Tar Heels scoring at 10.

ECU rallied for a four-run eighth drawing the contest even at 10-all. Francisco doubled to left field and came around to score on Caddell's team-leading ninth home run, a two-run shot to right. Moylan followed when he reached after being hit by a pitch for the second time on the night and Makarewicz tied the game on his third home run of the season — a two-run shot to right field.

The Pirates pounded out season-high 18 hits from seven different players. Norby and Worrell led the team with four each, while Francisco and Makarewicz added three apiece. Caddell had two base knocks and plated three runs in the game. Makarewicz plated a career-high four runs and Norby drove in three.

ECU will open up American Athletic Conference play this week when it hosts Cincinnati for a four-game set. First game of the series is Thursday, April 1 at 4 p.m. (ET) and will be streamed on ESPN+.