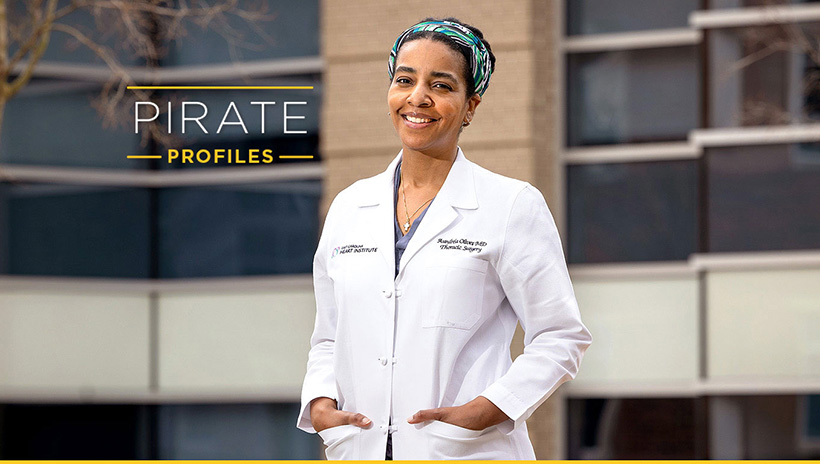 One day she noticed that her physics teacher appeared hot and was sweating, and so she asked if he felt OK.

"When he said he was having chest pain, I insisted that he go to the nurse and get an aspirin and get his BP (blood pressure) checked," Oliver said. "He ultimately was fine after proper cardiology evaluations, but after that experience he urged me to consider a career in medicine. Later that year, one of my teammates on the debate team complained of abdominal pain and was dismissed by our coach. I called her mom and explained that I was concerned that she might have appendicitis and should be taken to the emergency room and that she should meet us at the school to take her daughter. She ended up with an appendectomy later that evening for acute appendicitis."

Today, Oliver is an assistant professor in ECU's Brody School of Medicine and specializes in thoracic and foregut surgery, an area in which she sees a great need.

"When I looked to see where the greatest need for surgeons was in the fight against cancer, it wasn't hard to see that lung cancer has remained the number one cancer killer in the U.S.," Oliver said. "At the time of my decision to go into thoracic surgery there was no immunotherapy, and TKI (tyrosine kinase inhibitor) therapy was still in its infancy for lung cancer. Lung cancer patients needed surgeons, and also at the time the field was not very attractive due to the perceived harsh training environment, long hours and high stakes surgery. It sounded like there was a need that would only grow, and where surgeons could have a big impact in survival."

Oliver became interested in teaching in medical school, describing great teachers who not only cared for wealthy patients, but also poor and marginalized patients in underserved communities.

"I watched my attendings in awe as they seemed to be so adept at physical diagnosis, uncovering pathology or delivering excellent care with compassion regardless of who the patient was," Oliver said. "I knew they were tired, frustrated and underappreciated. They could get easier, better-paying jobs at one of the other three medical schools in town or at half a dozen teaching hospitals. Many of them led their fields in research and revolutionized the way we deliver care. They were there because they could have impact and reach patients who needed them. We students were merely their witnesses, and for the more seasoned faculty, a place to impart decades of wisdom. Every interaction felt important because everything seemed to matter to the faculty and residents who taught us. They taught me the value of students — they keep you honest and remind you why you are doing what you do. Who wouldn't want to help someone see something they have never seen before and then understand it? When you see a student begin to understand, or better yet apply something they have learned, it is like watching the sun rise. It never gets old."

Oliver said the COVID-19 pandemic has changed how her students learn, especially with the loss of in-person lectures and study groups. But she said there is one thing the pandemic hasn't affected.

"Their passion hasn't changed," she said. "Every one of them has sought ways to impact local communities, their fellow students and the Brody community through this pandemic." 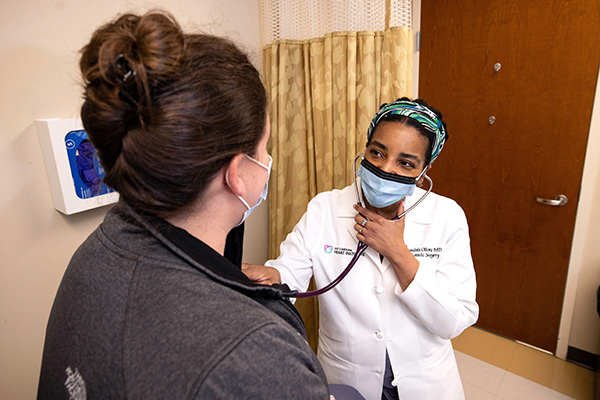 Dr. Aundrea Oliver is proud of the role she has treating eastern North Carolina patients, some of whom have limited access to care.
Oliver said the pandemic has changed procedures and processes in the medical profession, but it has had a much larger effect on patients.

"I might have to make a few extra phone calls, but in the bigger scheme of things, it is a small thing compared to what our patients have to navigate," she said.

Oliver knows how things will change.

"Get your vaccine — no excuses," she said.

Oliver cares for patients who live in an area where incidences of high blood pressure, heart disease, stroke and diabetes are higher than in other regions.

"Unfortunately, these diseases are also linked to social determinants of health, and they transcend race and gender," she said. "I know what it is like to care for people who live amongst some of the most cutting edge advances in medicine but suffer from easily preventable disease and morbidity due to their limited access to care. Here it is no mystery what is needed, and we merely need to be about getting the care to the folks who need it. That takes people, and I am one of the many people who get to do just that every day."

"The surgical principles haven't changed, just our application of them through advances in technology," she said. "Better instrumentation, visualization, safety, pain control and systemic therapy have revolutionized how, when and on whom we are able to operate. We can do more for more fragile, elderly or advanced disease patients that can improve their quality of life. Sometimes we can also better understand when we shouldn't operate, which is an equally important skill as a surgeon."

Oliver knows that as a woman of color, she can influence her students and patients in a positive way.

"For some of my patients, especially elderly ones, they have a hard time believing that I am not the nurse," she said. "For students, I think it sends the message that you can be successful in achieving your goal of becoming a doctor."

She also knows there's more to it.

"In my humble opinion, my color and gender are meaningless if I have no quality of character or integrity," she said. "If I am a person of substance, then all the components of who I am have meaning, value and force for change in the lives I encounter."