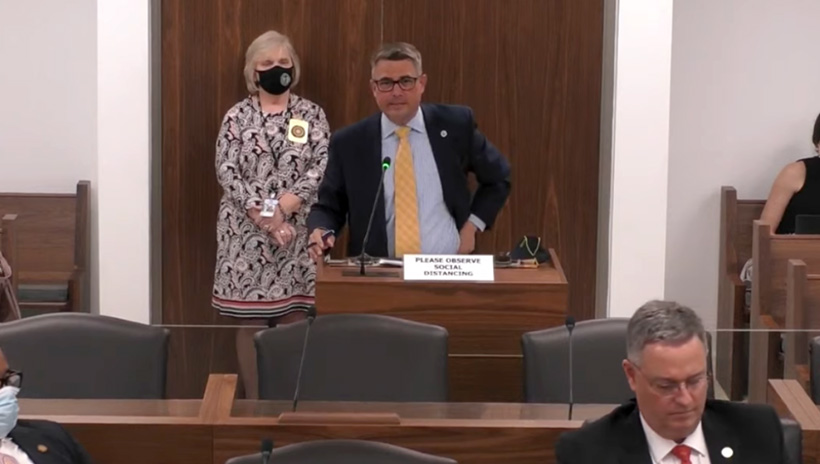 See more information about this bill and how you can support NCACC's stance under "Action Items" below.

The General Assembly continued its high-volume committee work this week, as it has done most of the legislative session. Many committees considered bills of interest or impact to counties, as described below, including legislation requiring additional information be included on ballot questions for general obligation bonds.

One bill that was scheduled to be heard was Senate Bill 455 Decriminalize Non-Statutory Offenses. That bill prohibits criminal enforcement of local ordinances (currently a class 3 misdemeanor with a fine of not more than $500) and changes violation of ordinances to an infraction punishable by no more than a $50 fine. The bill was scheduled to be heard this week in the Senate Judiciary Committee, but NCACC, along with some county attorneys and other stakeholders, asked the bill sponsors to please hold the bill to work further together on the legislation. NCACC thanks Senator Danny Britt for removing the bill from consideration this week and looks forward to working with him on bill language counties can support.

NCACC urges you to contact your Senator(s) and discuss why the ability to enforce ordinances criminally is a valuable tool in the toolbox and ask for the bill to be amended to be a study, as recommended by the General Statutes Commission, and as filed last year in Senate Bill 855/House Bill 1226 Recodification of Criminal Laws.


The bill was for discussion only in the Senate Finance Committee this week. NCACC Executive Director Kevin Leonard addressed the committee and noted some practical concerns with the legislation, including:


NCACC thanks bill sponsors Senator Todd Johnson and Senator Carl Ford for the opportunity to speak on the bill in committee and we look forward to continuing to work with them to improve the legislation. NCACC encourages our members to contact your Senator(s) and discuss how the legislation impacts your county.

House Bill 284 Repeal Right of Action/Capital Outlay Fund — repeals the ability for local school boards to sue the county over appropriations to the capital outlay fund and makes final the decision of the county commissioners on the appropriation amount. The bill is scheduled to be heard next week in the House State Government Committee. This is a long-standing goal of NCACC and our membership. NCACC encourages our members to contact their House member(s) and illustrate how the current model puts counties and school boards in an inherently adversarial position and ask them to support this good government legislation.


Governor Cooper and NC Department of Health and Human Services Secretary Cohen announced this week that if trends continue in the current direction, NC will lift mandatory social distancing, capacity, and mass gathering restrictions by June 1. Vaccines are now available to individuals 16 and older across the state, and 35% of adults are fully vaccinated.


Visit NCACC's resource page on the American Rescue Plan HERE, which will include updates on information and other events as they are added.


NCACC is hosting two virtual meetings for members over the next month:


Medicaid Managed Care Standard Plans will go live July 1, marking a milestone in North Carolina's Medicaid transformation. Representatives of the five prepaid health plans (PHPs) chosen to deliver services to Medicaid beneficiaries will be available to hear concerns and answer questions during this hour-long listening session hosted by the NCACC. County commissioners and county management staff are encouraged to attend.

Indicate topics and questions to address

If you have specific topics or questions you would like to have addressed during the meeting, we request that you indicate those topics and questions on this brief survey. Providing your questions in advance will ensure that the PHPs have the correct expertise and representatives in the meeting.


Leisha DeHart-Davis, Director of the Local Government Workplaces Initiative at the UNC School of Government, will share insight and expertise into recognizing personal stressors, organizational stressors and signs of burnout; and supporting employee mental health during the pandemic and the endemic. County management staff is encouraged to attend, and is welcome to extend the invitation to county department heads.

The 2021 Excellence in Innovation Awards program is now accepting applications. In addition to the ongoing work taking place across county disciplines, special consideration will be given this year to COVID-19 response efforts. Click HERE for more information on the awards program.
Go Back