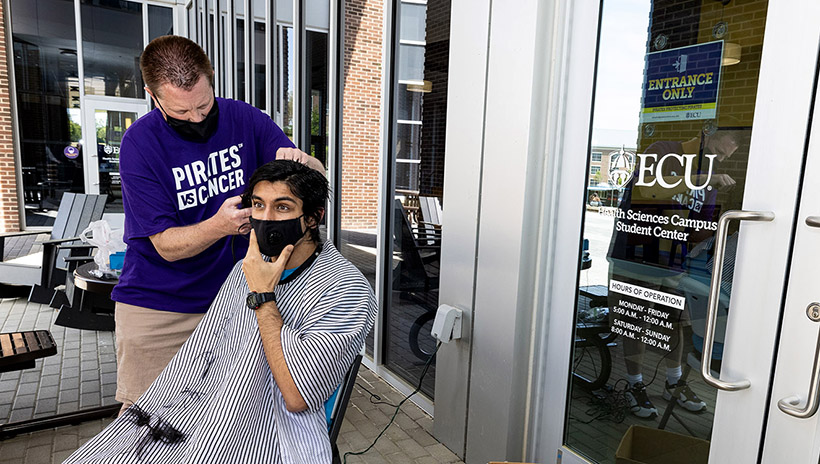 The COVID-19 pandemic presented a host of challenges for the student organizers of the annual Pirates Vs. Cancer fundraiser this year, but they remained undaunted and still managed to raise more than $13,000 for local pediatric cancer patients.

On Friday afternoon, the popular event — during which people have their heads shaved or hair cut for charity — returned to ECU's Health Sciences Campus Student Center, but with some noticeable differences. 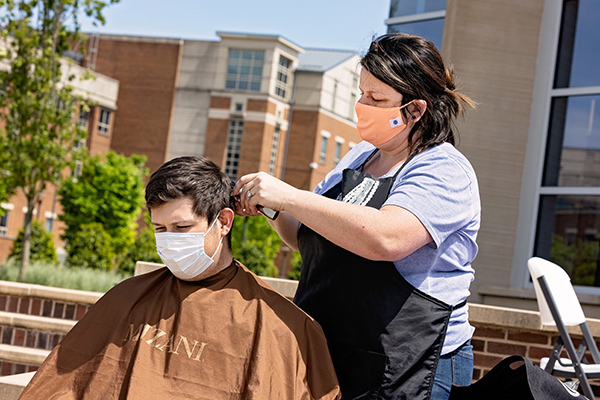 John Cantu gets his hair cut by Karen Gay from Hair Graphics.
Due to COVID-19 restrictions, there were no crowds or live bands. Heads were still shaved, but participation was limited and reservations were required. In previous years, one of the event's highlights was young patients from Vidant Medical Center helping to shave heads, but they weren't able to attend the event this year due to the ongoing pandemic.

"Planning during the pandemic was not easy. There were a lot of limitations on how the event could proceed to ensure a safe environment for our participants. It also took a toll on our fundraising given many businesses and individuals were hit hard financially," said Alexandra Doherty, a first-year medical student at the Brody School of Medicine, who served as the president of this year's Pirate Vs. Cancer event.

Even with these challenges, Pirates Vs. Cancer was still able to raise more than $13,000 this year, to bring the event's four-year total to nearly $125,000. All of the funds raised will help support pediatric cancer patients at the James and Connie Maynard Children's Hospital at Vidant Medical Center by helping to fund medical equipment and child life services, which are crucial to the health and well-being of the children being treated there.

"It's really inspiring to see how many people at ECU are willing to participate and donate to this cause. It's been a tough year on everyone, but that hasn't prevented them from wanting to support the local pediatric patients in their fight against cancer," Doherty said.

For Doherty, being part of Pirates Vs. Cancer was particularly meaningful.

While she was an undergraduate student at the University of North Carolina at Chapel Hill, Doherty volunteered at a pediatric oncology clinic where she met many children and families who were facing unimaginable challenges. She grew close with a young boy who passed away a few years ago and has been continuing to raise awareness for childhood cancer in his honor ever since.

"To be able to come to ECU and continue to do that through this organization has been an awesome experience," she said.

First-year medical student Arjun Bhatt — getting his first haircut since the pandemic began — was inspired by the cause, as well as by a former teacher who once donated a kidney.

"The very least I can do is to give some element of myself to kids who have less. I'm an organ donor, but I'm not a living donor — I haven't taken that step," Bhatt said. "I think the act of growing something that's going to be given to someone else is a sacred thing to do. This isn't a kidney, this is hair, but it's a step." 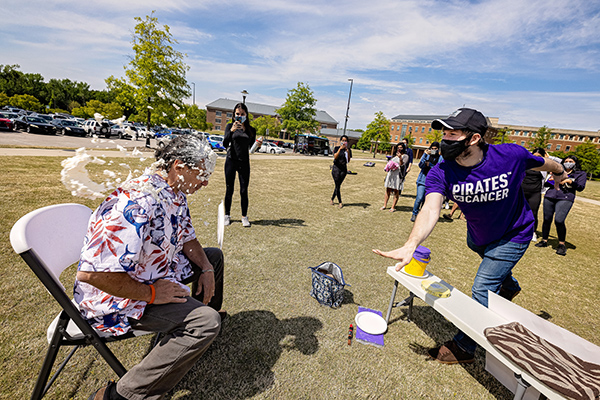 Senior nursing student Madison Lear had several inches of her hair cut off during the event.

"My aunt had breast cancer and she's been in remission for about a year now and my boyfriend's mom is going through chemo now, so I thought I'd donate to people who probably need it more," Lear said. "I feel like a lot of people on the Health Sciences Campus are very into helping others. You can see everyone's smiles when they talk about student organization events, especially stuff that goes toward people that don't have it as good as we do."

"They're getting involved," he said. "They're not just going to school; they're actually showing their support for what they're studying."

This year's Pirates Vs. Cancer committee will continue to raise funds until June 4 through its JustGiving website.
Go Back