N.C. Gets a Bite at the Apple | Beaufort County Now | The high price tag leaves a bad taste for some

N.C. Gets a Bite at the Apple

Published: Tuesday, May 4th, 2021 @ 2:19 am
By: Carolina Journal   ( More Entries )
Publisher's Note: This post appears here courtesy of the Carolina Journal. The author of this post is Donna King. 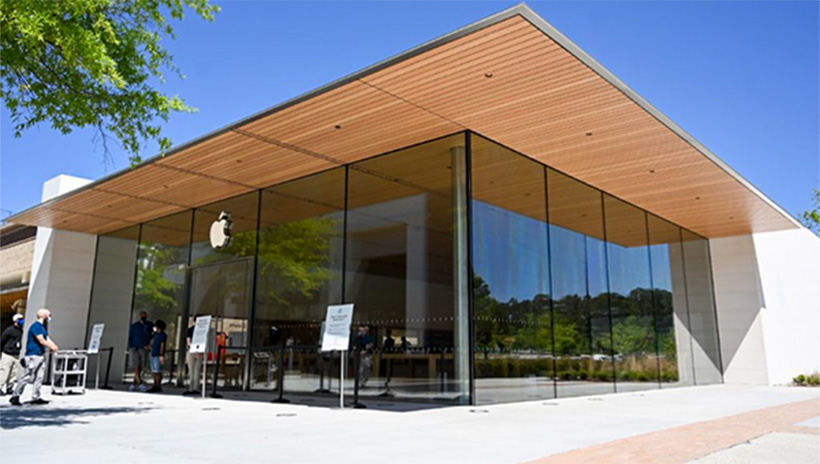 Apple's move to the Triangle will It will cost the state more than $845 million dollars in tax breaks promised over the next 39 years. | Photo: Maya Reagan

This week Apple Inc. announced North Carolina will be the new home to a billion-dollar campus working in machine learning, artificial intelligence, and software engineering. The move will create 3,000 jobs that pay an average of $187,000 annually. It is a high-impact announcement for the area around the state capital, Raleigh/Durham and Cary, but the deal includes community and infrastructure contributions from the tech giant amounting to an estimated $1.5 billion in economic benefits to the state. It will also cost the state more than $845 million dollars in tax breaks promised over the next 39 years. When local incentives are added, the total comes closer to $1 billion in incentives to draw the tech giant.

Here's a breakdown of the Apple deal.

The state money for Apple is coming from a program called JDIG, or the Job Development Investment Grant. It was originally intended to reward and draw companies to more disadvantaged areas in the state. To determine ranking, all 100 counties are ranked by economic income, unemployment rate, and changes in population. The 40 most challenged counties are Tier One, the next 40 most challenged counties are Tier Two, and the most stable, affluent counties are Tier Three. Apple's move to the Tier Three area around the Research Triangle Park does not meets original JDIG criteria, but the grant program allows for exceptions in the case of companies investing more than $1 billion and creating more than 3,000 jobs. JDIG is considered a performance-based incentive program and allows tax breaks based on the level of job creation by the corporate recipient. If they don't create the jobs, they don't get the break.

"Companies often don't use the full grant in the end," said Joe Coletti, senior fellow of fiscal and tax policy at the John Locke Foundation. 'The cost of compliance and documenting everything might be more than value of the grant. It's further evidence that incentives are not the thing that brings the company here."

According to experts, the criteria for site selection is more complex, going significantly beyond politics or even incentives. Site Selection magazine consistently ranks North Carolina as the top business-friendly climate, saying that most companies look for a strong workforce, good quality of life, ease of regulatory procedures, right-to-work policies, and low taxes. In 2020, North Carolina tied for first place in their ranking with Georgia.

Incentive programs are listed as the ninth priority on their study's list of 10. Even so, they are used by states across the country to attract large companies. However, research into this program finds that money is not the main draw of companies to an area. Research into the track record of the program shows that about two-thirds of the companies who participate do not fulfill the requirements needed to get the full promised tax breaks.

In the case of Apple, North Carolina's $485 million dollars over 39 years amounts to around $20 million annually. For a $2-trillion company, it is a relative drop in the bucket, particularly as they plan to spend millions on community initiatives, schools, and infrastructure.

So, why do states spend taxpayer money on incentives?

"There's a part of it that is like show business on both sides," said Coletti. "The companies have to show to their shareholders, and the next state, that they're negotiating a hard bargain and trying to get the best deal. Politicians have to show that they're doing their best so voters will reward them with another term."

North Carolina economic development experts have been working the Apple deal for years, within state government and in private industry, putting together what they hoped would be the most attractive incentive package to large employers. The effort was full force under tenure of former Gov. Pat McCrory as the state tried to draw Amazon's east coast headquarters. In 2019, Amazon split the award between New York and Arlington, Virginia. Virginia committed 750 million in tax breaks for Amazon, which promises to create 25,000 new jobs in the commonwealth, according to Business Insider. North Carolina spent millions on a pitch for Amazon, with the legislature lifting the cap on incentives to try to draw the company.

In 2018, Apple also decided against expanding in N.C., choosing Austin instead. In addition to the RTP Apple announcement, last week Amazon announced it was building a fulfillment center in Charlotte.

"When a window closed, we had a big door open," said House Speaker Tim Moore, R-Cleveland, of the Apple announcement.

The losses several years ago were blamed by Democrats, including Gov. Roy Cooper, on H.B. 2. But economist say that politics and incentives have are relatively low on the list of reasons a company chooses a site behind a business-friendly tax environment.

Even with all that the state has to offer, the cost of sweeteners in business development continues to drive the giveaways up. According to a recent paper published by Princeton University, state and local governments spend about $30 billion a year on corporate incentives, but a quarter of that goes to 0.1% of firms opening in new locations.

"If you're going to have a policy fix for this, it has to be at the federal level, that they just outlaw corporate incentives for everybody, similar to the way North Carolina has outlawed counties competing against each other," said Coletti. "Interstate compacts have proven not to work. There's honor among thieves, but not necessarily among governments."

Cooper touched on the Apple announcement in his recent State of the State, linking it to his budget priorities that increase the current levels of state spending on education.

"You may have heard that a little technology company decided to come here," Cooper said to applause in the House chamber.

"The good jobs are here and are going to keep on coming. Let's make sure that our people can get the education and training they need to get them," he told lawmakers.

Overall, the tech giant is spending billions of dollars on silicon engineering and 5G technology, which they describe as "two pivotal fields shaping the future of next-generation consumer electronics."

It makes the location a logical choice with N.C. State University, Duke University, and UNC-Chapel Hill all within a quick drive. Add the existing high-tech business neighbors of SAS, Red Hat, Lenovo, IBM, and Epic Games, and the choice becomes obvious. North Carolina's piece is part of Apple's larger announcement that it is planning to hire 20,000 people across the country as it turns its attention to 5G and artificial intelligence.

"As a North-Carolina native, I'm thrilled Apple is expanding and creating new long-term job opportunities in the community I grew up in," said Jeff Williams, Apple's Chief Operating Officer in a press release distributed by the N.C. Dept. of Commerce. "We're proud that this new investment will also be supporting education and critical infrastructure projects across the state. Apple has been a part of North Carolina for nearly two decades, and we're looking forward to continuing to grow and a bright future ahead."

Still, others have said it is misdirected resources at a time when thousands of small businesses have either collapsed or struggled during Cooper's COVID-related shutdowns. While the data on the full impact of COVD shutdowns is still being uncovered, Small Business North Carolina estimated that companies with fewer than 19 employees will prove to have been hit particularly hard.

Coletti said incentives aside, the best way to draw and build business here is to stick to the basic policies of building a strong economy.

"The more that we can keep our housing market in good shape, continue deregulation, continue low spending, continue low taxes all those things make makes North Carolina a great environment for business to locate and it provides them security and surety into the future. There's no paperwork you have to fill out to be in a great place, you just have to go there."

Apple will reportedly gear up hiring immediately with employees in an existing facility in Research Triangle Park. Plans build a 1-million square foot campus, that they say will run on 100% renewable energy, are already underway.
Go Back