G. W. Bush and Mark Zuckerberg partner to "reform" immigration (a.k.a. cheap labor) | Beaufort County Now | With friends like this, who needs enemies. But hey, it's not their jobs that will be lost. 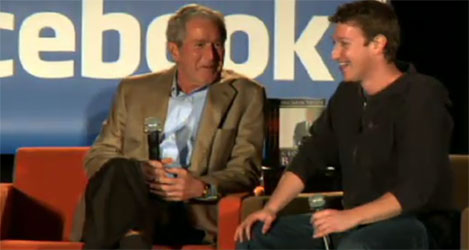 George W. Bush told radio host Hugh Hewitt, during an April 22 interview, that “the Bush Center is spearheading a reform movement” concerning mass migration. The former president added, “And you know, we’re talking to people about, you know, what needs to be done.”

The Zuckerberg-owned organization listed on the George W. Bush Presidential Center’s webpage for immigration policy under “Program Partners” is the Chan Zuckerberg Initiative.

“The Chan Zuckerberg Initiative was founded in 2015 to leverage technology, community-driven solutions and collaboration to help solve some of society’s toughest challenges.  Our mission is to build a more inclusive, just, and healthy future for everyone,” says the Initiative’s official website. Part of its “mission” is working with Bush to encourage amnesty for illegal migrants.

The Chan Zuckerberg group is the very same that dubiously pumped private cash into the 2020 election process in order to secure a “victory” for Joe Biden. They were rewarded with a position in the Biden administration.

The other Zuckerberg charitable organization Bush has worked with, FWD.us, has condemned America in the past for what it calls the US’s “harmful immigration and criminal justice systems [that] have locked too many people out from the American dream.”

FWD.us – also partnered with Rupert Murdoch’s open borders group “Project for a New American Economy” – celebrated the passing of the American Dream and Promise Act by the US House of Representatives in a March 18 statement, asserting, “This vital legislation would create a pathway to citizenship for millions of Dreamers and TPS holders who have called the United States home for decades.”

This is not the first time Zuckerberg has partnered with “moderate” establishment Republicans to push for leftist immigration policies.

The left-corporate obsession with mass migration is due to three key factors:

No one on the left denies such charges.