You can fight City Hall, and sometimes you may win | Beaufort County Now | Case shows how eminent domain is abused

You can fight City Hall, and sometimes you may win 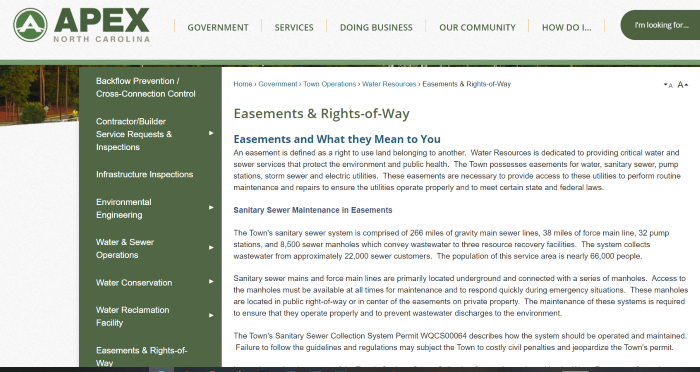 It’s not clear if Beverly Rubin ever will get the result she wants in her ongoing property-rights fight with the town of Apex.

But a recent N.C. Court of Appeals decision in the Apex-Rubin dispute offers some clarity. The court sent a message to Apex and other local governments: Don’t expect judges to bail you out when you trample on a property owner’s rights.

The legal battle stretches back to 2015. When Rubin rejected a developer’s request to grant a sewer easement across her property in rural Wake County, the developer turned to the town for help. Apex moved to acquire the easement through the town’s power of condemnation.

As Rubin fought the condemnation in court, Apex went ahead and installed a sewer pipe. The town justified its move on the basis of its “quick-take” powers. Those powers, granted by state law, gave Apex the right to take immediate possession of condemned property.

But Rubin ended up winning her battle against condemnation. Courts determined that the taking of Rubin’s property did not serve a public purpose. The taking benefited the private developer instead. He had turned a $2.5 million profit after selling the tract of land that would gain sewer service because of the disputed pipe.

Despite Rubin’s court win, she had a lingering problem. A sewer pipe she never authorized remained on her property, now serving a 50-home subdivision.

Rubin wanted the pipe moved, but Apex refused to comply. The town shifted gears legally, arguing that the dispute involved an inverse condemnation. Under that circumstance, the only remedy Rubin could pursue was payment from the town for her condemned property.

Now a unanimous three-judge panel of the N.C. Court of Appeals has sided with Rubin.

In a 44-page opinion handed down May 4, Judge Lucy Inman took both Apex and the trial judge to task.

Apex “asks this Court to uphold the Town’s continuing intrusion onto the land of a private citizen through a circuitous and strained application of North Carolina law on eminent domain and inverse condemnations,” Inman wrote.

“The Town’s position, in essence and when taken to its logical conclusion, is as follows: (1) if a municipality occupies and takes a person’s private property for no public purpose whatsoever, that private landowner can do nothing to physically recover her land or oust the municipality; (2) if the encroachment decreases the property’s value, then the landowner’s sole remedy is compensation by inverse condemnation; and (3) in all other instances, a landowner is powerless to recover or otherwise vindicate her constitutional rights.”

Inman and colleagues rejected that line of legal reasoning. “This is not the law, nor can it be consistent with our Federal and State Constitutions.”

Trial judge Bryan Collins does not escape Inman’s critique. The appellate judge explains how Collins “erred” in ruling that the taking of Rubin’s land for a sewer pipe amounted to inverse condemnation.

Remember that Apex lost the initial court battle because its taking of Rubin’s land served no legitimate public purpose. “[T]he public purpose requirement serves as a shield to protect the landowner from government intrusion rather than as a sword to cut away private property rights,” Inman wrote.

For example, a city could use its condemnation power to pave a landowner’s gravel driveway “for no public purpose whatsoever, even if the landowner, in the exercise of his private property rights and out of a personal preference for gravel, had never sought to increase the value of his lot by paving the driveway.”

If the city lost in court, as it should, “the theory that inverse condemnation damages were the property owner’s sole remedy would preclude relief for the municipality’s flagrant violation of the landowner’s constitutional rights,” Inman explained. “We do not believe the law of inverse condemnation can be used to facilitate such an abuse of the government’s eminent domain power.”

Despite the Appeals Court’s clear rejection of Apex’s legal arguments, the future of the disputed sewer pipe remains in limbo. Inman and her colleagues agreed that Rubin would need further legal action. She would have to pursue a new trespass claim against the town if she still wants the pipe moved. There’s no guarantee that new court case would force the town to comply.

Regardless of the final resolution of this dispute, though, the Appeals Court has reminded cities and towns of an important principle. Their powerful sword of condemnation faces a more powerful legal shield. Only a legitimate public purpose can justify a government taking of private property.