The Barefoot Movement Makes It Their Sunday in the Park

Login to Send a Private Message to Wyatt Sanderman Day
The Barefoot Movement returned to the region to play Greenville's Concert in the Park on Sunday, July 29, 2012, and it was a rousing success. The four person combo hailing from North Carolina (Noah Wall and Tommy Norris are from Oxford), Tennessee (Quentin Acres is from Oneida) and South Carolina (Hasee Ciaccio is from Myrtle Beach), found a way to brave the oppressive heat of a July evening, with a still wind, and the resulting insects that flew in annoying circles about the person of the performers and the audience alike. 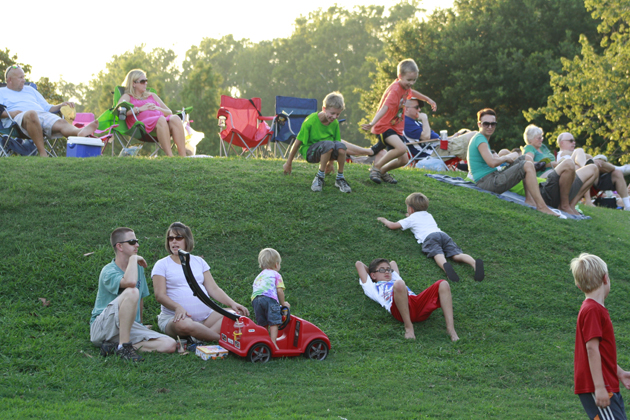 This excellent concert of The Barefoot Movement was brought to us courtesy of the Greenville's Parks and Recreation's Sunday in the Park Concert Series. The parents, here this Sunday, enjoyed the music, and their children enjoyed the social event of running and playing with their peers: Above.     photo by Stan Deatherage

The evening proved to be a co-dependent process where a talented band of Bluegrass /Traditional Music musicians endured the elements of menacing bugs and the heat of that July evening to share their love of what drives them onward with the audience's love of good, well presented melody, irrespective of the co-dependency of effort to enjoy the moment. And what a precious moment it would prove to be. 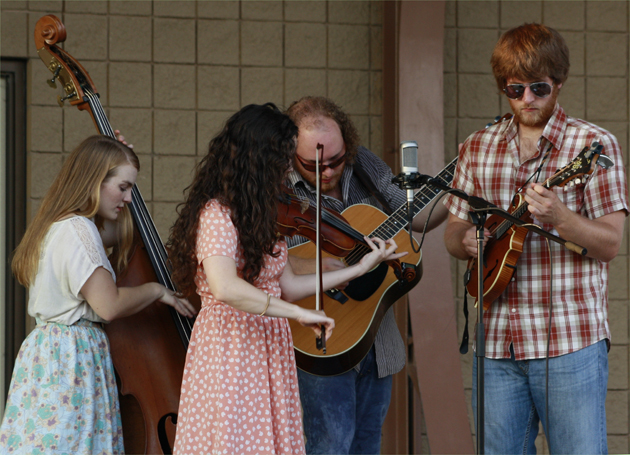 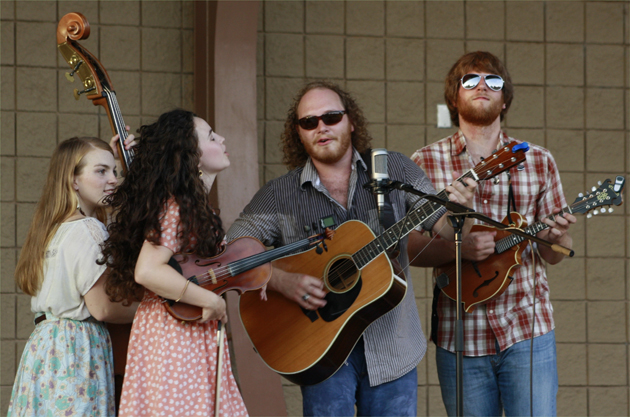 Although these young musicians have enough fine original music to fill up two volumes of audio discs, they took the opportunity, this night, to cover songs from Hazel Dickens ("Working Girl Blues"), an obscure Hollies tune, "Charlie and Fred," and Blind Mellon ("No Rain") to 6 traditional upbeat Old Time / Bluegrass ditties including one of my favorites from these astute musicians - "Cluck Old Hen."

The balance of the show was one ballad in the traditional sense, "Tobacco Road" (from their first volume of tunes, "Footwork"), and five other songs, most of them fast Bluegrass reels from possibly the yet unreleased, and untitled, second album of melodies already recorded. These songs: "My Little Darlin," "Sheepherder," "Do What You Please," "2nd Time Around," "Chasing Shadows" were cheery and bright, merry melodies - worthy of anyone's "happy feet." 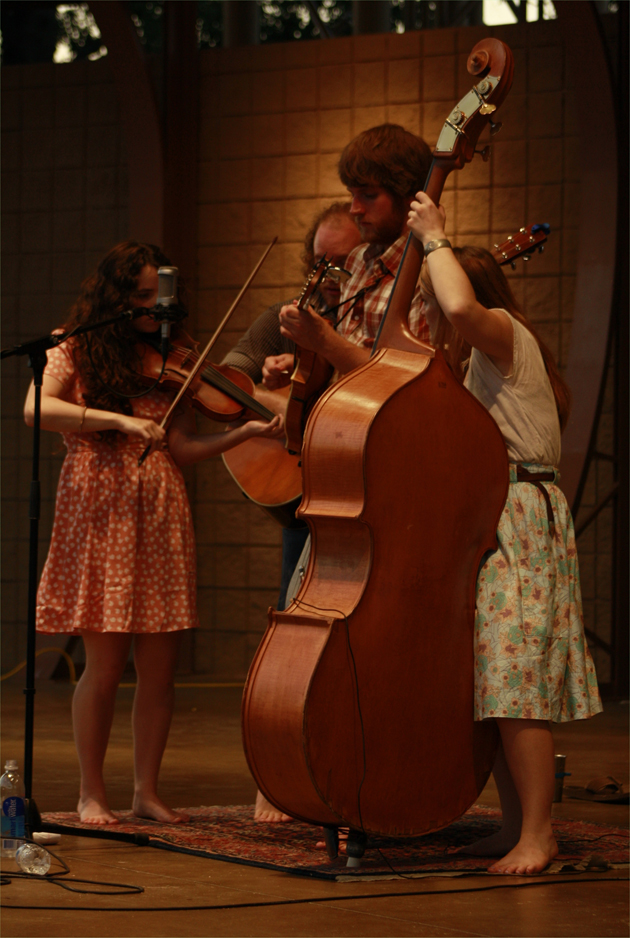 Later in the evening, as the natural light of day becomes ever more precious, The Barefoot Movement keeps it tight - their arrangement and their melody. I included this picture because I love watching Hasee reaching high for those low notes on the Upright Bass. I would be quite remiss if I did not make mention of the obvious, and therefore draw your attention to the bare feet: Above.     photo by Stan Deatherage

Well, this was not a dancing crowd - too damn hot - but that did not keep the band from finding their total rhythm from the tips of their toes to the feel of their fingers. This was a picking good time for the Barefoot Movement, and resolve to exhibit their abject energy in the face of the incessant insects, and boiling heat was note worthy.

After the show, I went backstage, and took the opportunity to speak to the band mates on a variety of issues, not least of which were the atmospheric conditions of climate and flying things: 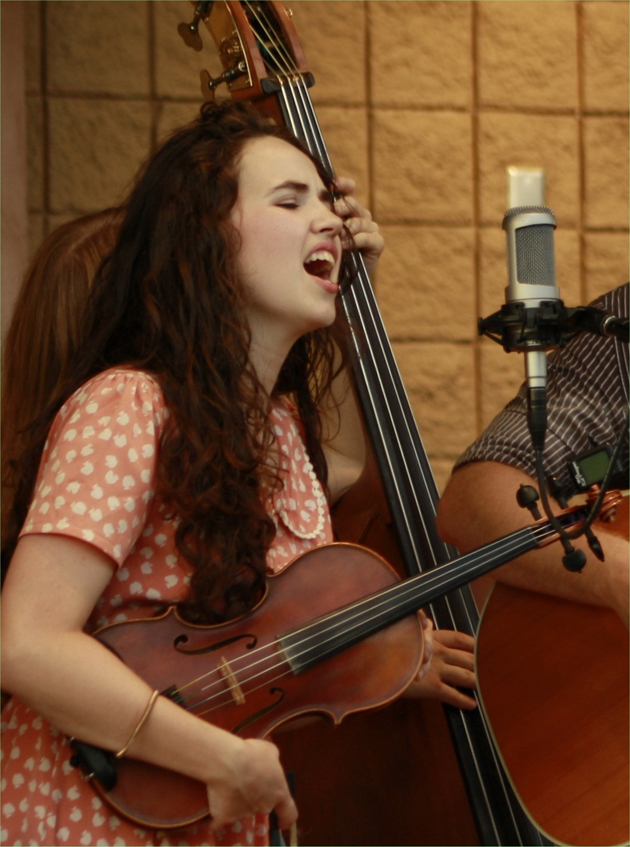 Noah Wall belting out the big notes on her rather personal anthem, "Tobacco Road," an ode to every farmer in North Carolina, who had the good fortune to have a sandy hill, and the strong will for the hard work it took to grow the sticky weed: Above.     photo by Stan Deatherage

Wyatt: How did it go tonight?

Noah Wall: "Oh, it was fun. It was a big crowd, and we really love playing for lots of folks, however the bugs were another matter. A few times when I took deep breaths to belt out the bigger notes, I think I sang out more insects than I did the melody." 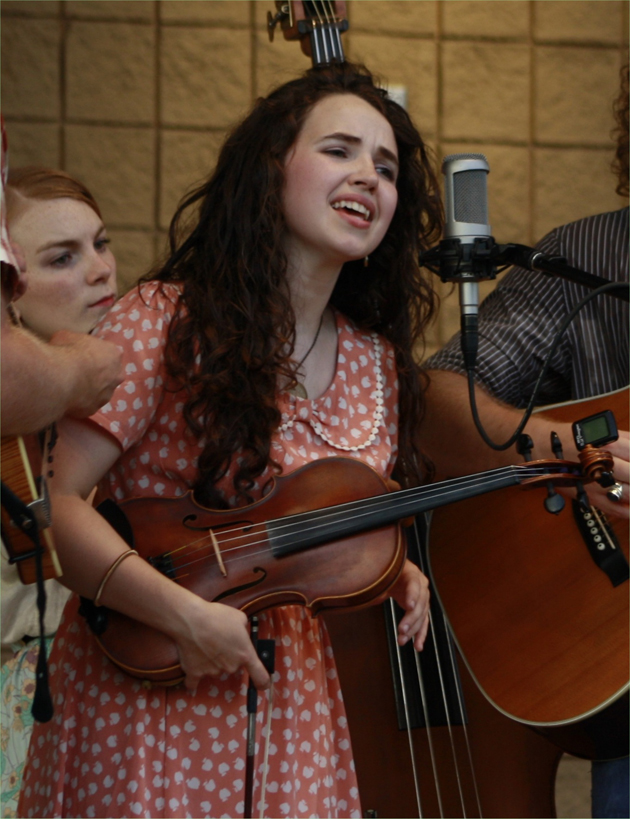 Noah Wall pleads her heartfelt case in every impassioned note that she renders from her petite frame, with such a big heart: Above.     photo by Stan Deatherage

Wyatt:  {After slapping Quentin Acres (6-string Acoustic and Mandolin) on his back, and noticing his soaked fabric} Quentin, your shirt is as heavy with sweat as my football jerseys were after a long night in late August on Friday nights here Downeast: Did your fingers slip a bit on that guitar pick?

Quentin Acres: {In his vintage east Tennessee twang} "Naww, the pick didn't slip. I got it clawed up in there pretty good. You know, I don't mind the heat so much. We play a bunch of festivals in the Summer, and it can get kind'a hot where ever we are, but maybe not as much as here, right now ... I mean there's just no breeze here tonight. Now that you mention it, it's pretty dang hot." 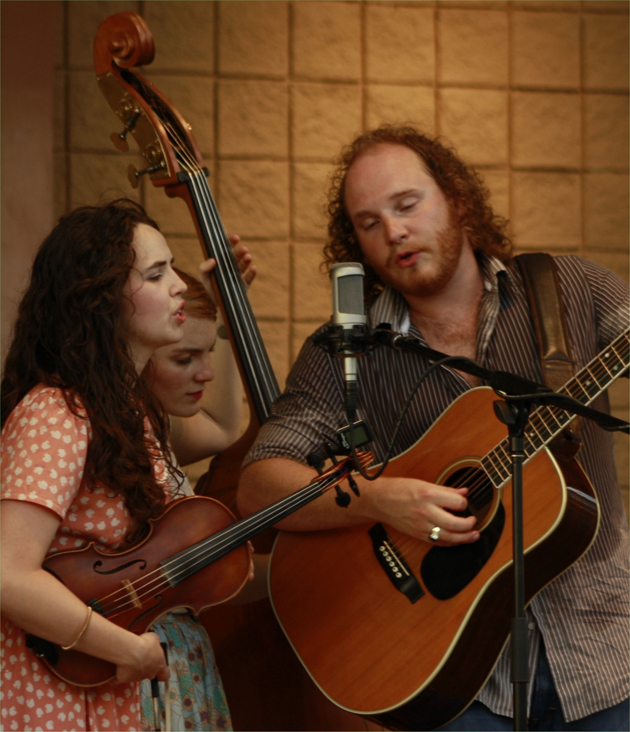 Noah Wall lowers her Fiddle to sing, Hasee Ciaccio hides out with her Upright Bass and Quentin Acres picks his Acoustic 6-string, and provides his twanging background harmonies. It is truly a pleasant combination: Above.     photo by Stan Deatherage