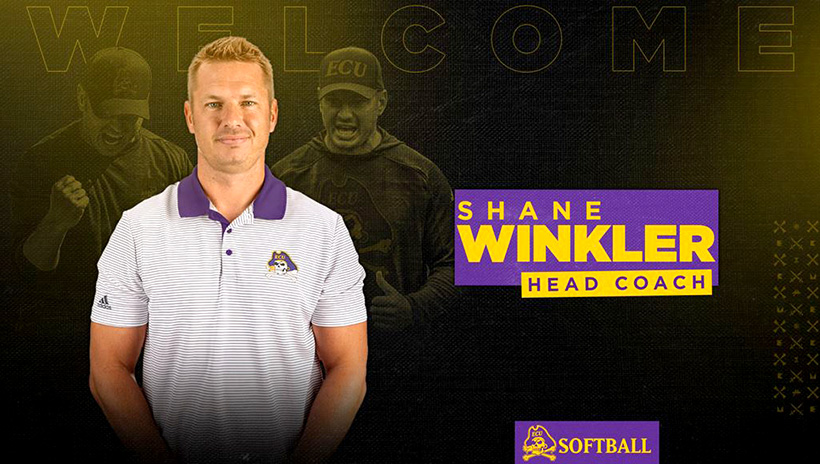 Winkler becomes the fifth head coach in ECU softball history and replaces Courtney Oliver, who served in that capacity the past six seasons.

"I couldn't be more excited to be the next head softball coach at East Carolina," Winkler said. "I want to thank Jon Gilbert, J.J. McLamb and Caroline Bevillard for this amazing opportunity. ECU is a special place with a championship history on the softball field. I'm looking forward to getting to know our team, building a championship culture and returning this program to that type of success."

During his three years at GW, Winkler compiled a 91-43 record and captured the school's first two Atlantic 10 championships, sharing the title in 2019 before claiming the first outright championship this past season. The Colonials won both the regular season and tournament titles in 2021 to advance to the NCAA Championship for the first time and made their second overall postseason appearance.

GW participated in the National Invitational Softball Championship (NISC) Liberty Regional after claiming a share of the 2019 league title.

Winkler became the first Atlantic 10 Coach-of-the-Year in program history this past year after leading the Colonials to a 23-1 conference record in addition to a sweep of championship banners. GW was 38-8 in A-10 play during his tenure.

Under his tutelage, 12 student-athletes earned all-conference accolades highlighted by Jenna Cone, who earned A-10 Player-of-the-Year honors in 2019 and 2021, and Sierra Lange, who made history as the first Colonial to be named the conference's Pitcher-of-the-Year in 2021.

In addition, 11 players received all-region accolades, including a school-record seven this past year.

"We are excited to have Shane on board to lead our softball program," Gilbert said. "He's a high-character individual, competitive, passionate and driven to be successful. During our discussions, he laid out a vision and plan to take our program to new heights. We are fortunate to have outstanding softball facilities and Shane understands the opportunity we have here.

"He has a proven track record of developing talent at his previous stops and has built strong relationships in the recruiting circles. As a former student-athlete, he has an appreciation and understanding of what it takes to be successful at this level. He is the ideal choice to lead the Pirates."

"I am so grateful for the opportunity Tanya Vogel, Chandra Bierwirth and John Square gave me at GW," Winkler stated. "The past three years have been special as we had the best team chemistry in the country and that helped result in multiple championships and an historic 2021 season. I was blessed to be their coach and look forward to their continued success."

Before taking over the program at GW, Winkler spent a decade (2009-18) leading the softball program at Charleston Southern University. He totaled a program-record 261 wins with the Buccaneers and guided them to their first NCAA Tournament berth in 2014. Winkler made his mark at Charleston Southern with three 30-win seasons and two Big South Championship final appearances highlighted by their breakthrough victory in 2014.

CSU ranked in the top 10 nationally in home runs in 2017 and was one of just two teams in the country, along with national champion Florida State, to rank in the top 30 in both home runs and steals in 2018.

Winkler's Buccaneers produced 35 All-Big South Conference honorees and 10 all-academic selections. The program also produced its first Big South Scholar Athlete-of-the-Year and had a recipient of the Christenberry Award for top academic student-athletes in the conference each of his final two seasons.

He has amassed 352 career victories during his 13 seasons as a head coach.

Prior to his tenure at Charleston Southern, Winkler served three seasons (2006-08) as an assistant coach at Marshall where he was responsible for the outfielders and the offense. The Thundering Herd broke the program home run record twice on his watch and consistently ranked among the top offenses in Conference USA led by a four-time All-American catcher. During his three seasons, the Thundering Herd had a combined record of 91-78.

Winkler's first collegiate job came as co-head coach at Danville Area Community College (Ill.) for the 2005 season in which the Jaguars produced their first winning campaign in 12 years. He got his start coaching softball while in college working with a summer program in his hometown of Kentland, Ind.

Winkler has also been active with National Pro Fastpitch, where he served a summer season as the head coach of the Chicago Bandits in 2014. He tutored numerous Olympians and NCAA champions, including former All-America pitcher Jennie Finch, during his time on the pro circuit, which also encompassed stints as an assistant coach with the Bandits (2009) and the Akron Racers (2007).

On the baseball field, Winkler was an outfielder who played collegiately at Illinois Central College, Purdue and Butler. He earned his associate's degree in general education from Illinois Central in 2002 before earning a bachelor's degree in communication studies from Butler in 2004.

Winkler moved on to play professionally with the Florence Freedom (2004) and Washington Wild Things (2006) of the Frontier League, and the Amarillo Dillas (2006) of the United Baseball League.
Go Back