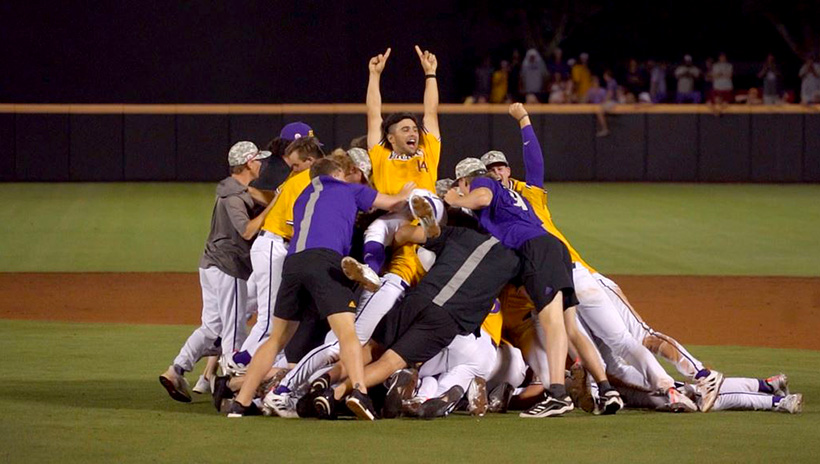 The Pirates defeated Norfolk State, Charlotte and the Terrapins on consecutive days to win their sixth regional title in program history and the third inside their home facility (2009, 2019 and 2021).

East Carolina advances to the super regional round of the NCAA Baseball Championship for the third time since 2016, joining the 2016 and 2019 squads that traveled to Texas Tech and Louisville, respectively.

Matt Bridges, who was named the Greenville Regional's Most Outstanding Player, notched his fifth save of the season and second of the weekend — tossing the final 1.1 innings without allowing a run or hit. He also struck out three against no walks. Cam Colmore (7-1) was named the winning pitcher after 2.1 innings of work during which he gave up two runs on two hits with a walk and three strikeouts. Maryland starter Connor Staine (0-3) was tagged with the loss, surrendering three runs on five hits with a strikeout in just 1.2 frames.

As the designated visiting team on the scoreboard, ECU went to work right away in the top of the first. Back-to-back doubles by Thomas Francisco and Josh Moylan delivered the first run of the contest while Makarewicz left the Pirates with a 2-0 lead by tacking on an RBI single. Matthew Shaw led off the home half of the stanza with a home run, but East Carolina starter Jake Kuchmaner retired three of the next four batters to keep the Pirate advantage intact.

Caddell responded in the top of the second with a solo long ball of his own to make it 3-1 before an Agnos sacrifice fly pushed the lead to 4-1 in the third. Shaw struck again to lead off the bottom of the third, clearing the wall in right to reduce his team's deficit to a pair.

ECU continued its scoring run in the top of the fourth as Moylan was hit by a pitch with the bases loaded, making it 5-2 through four complete. Troy Schreffler sliced the Pirate upper hand to 5-4 in the bottom of the fifth, posting a two-out, bases-loaded two-run single.

After the teams went scoreless in the sixth and seventh innings, East Carolina delivered what would be the knockout blow in the top of the eighth. Ryder Giles and Connor Norby drew consecutive walks to lead things off. A pair of fielder's choice plays resulted in Giles crossing home before Agnos laced a two-run double into the gap in right center to push the Pirates' edge to 8-4.

A two-run home run to right by Costes in the home half of the eighth allowed the Terps to draw within two, but Francisco provided an insurance run in the top of the ninth via an RBI groundout to stretch ECU's advantage back to three. Bridges finished Maryland off with a pair of strikeouts to seal the regional championship.
Go Back