Dream Act Obama | Eastern North Carolina Now | Jan Brewer, the governor of Arizona, has my nomination for the heroine of the year.

Jan Brewer, the governor of Arizona, has my nomination for the heroine of the year. When President Obama ignored the will of congress and issued an unconstitutional executive order to pander to the Latino illegal alien mafia, Governor Brewer stood up, and said, "Your illegal order is not recognized in my state, and illegal aliens will be granted no special privileges." Margaret Thatcher, the former Prime Minister of England was called "the iron butterfly." I guess that Jan Brewer could be called "the iron butterfly 2." It would take a very special person to standup to the President of the United States and tell him, "No, your order is unconstitutional and it will not be honored in my state."

Until a few days ago, 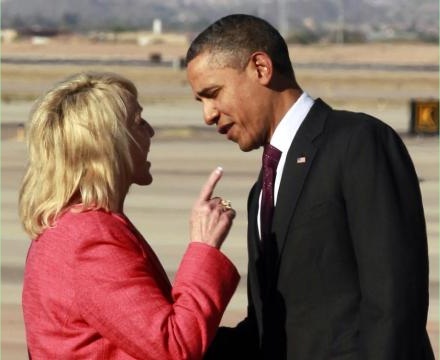 Governor Brewer lets Candidate Obama know just how she really feels toward his ambivalence toward enforcing immigration law.
President Obama said that he couldn't just overturn immigration laws on his own, since only the Congress acting through its legislative authority can change immigration laws. And three times, Congress has voted not to grant special status to a select group of illegal aliens through a program called "the dream act" which would allow children who were brought to the US by their parents at an early age a preferred path to citizenship. However, the will of the people, the rules of congress, or the Constitution will not stand in President Obama's way of securing additional votes for his re-election. We now have Dream Act Obama that actually benefits no one but him.

Dream Act Obama applies to young illegal aliens who entered the USA as children before the age of 16, to be no more than 30 years of age, and they must have lived continuously in the US for at least five years prior to the announcement of the executive order. In addition, they must be enrolled in school, a high school graduate or an honorably discharged member of the US military. To benefit from Dream Act Obama, a person must fill out an application, pay a fee of $465, and provide documentation to support their claim of legibility. Their application will be reviewed, and if deferred status is granted, they will be granted a two year stay of deportation, qualify for driver's license in most states, and work permits.

Needless to say, the Dream Act lobby is elated that President Obama succumbed under their relentless pressure. The President of Mexico, Felipe Calderon, extended his gratitude to Obama on behalf of his country. He said, "It is a humanitarian action and unprecedented, and it is good news that gives hope and a future to young immigrants." Mexico's 50 Consular offices across the US are holding events to help the young illegal aliens prepare their Dream Act Obama forms. And they are using the word "amnesty." Embassies around the world are being crushed under the paperwork for passport applications to come to America to qualify for the benefits of Obama's new law.

Dream Act Obama is merely a deferred action of deportation for two years. It is not amnesty. It is not a pathway to citizenship. Nor will it shield family members from immigration enforcement. And what will happen at the end of two years, no one knows. If Obama is re-elected or not re-elected, Dream Act Obama will become someone else's problem. It will have served its purpose.

One unavoidable fact of Dream Act Obama is that it will increase the supply of legal workers to compete for jobs with the 20 million Americans who can't find a job or have been forced into part-time positions. Obama may repeal the laws of Congress, but he can't repeal the law of supply and demand. An additional 2 million legal workers will have a major impact on our labor force. The NAACP supports Dream Act Obama knowing that the additional workers will affect the black labor force proportionally higher than any other group. The black unemployment rate is already a staggering 14.4%. What is more important, getting a few more votes for Obama or helping the black workers keep their jobs? When the Pitt-Greenville airport was being expanded most of the work was done by illegal aliens. There was not one single black worker used on this contraction, and I looked everyday hoping that I would see at least one black face, but there were none. I didn't see the NAACP protesting against the lack of participation for the black community. It was government money so there should have been equal opportunities for everyone.

The Dream Act Obama is conflicting with the recommendation of the 9/11 commission in which it states that in light of the fact the hijackers on 9/11 had driver's licenses that allowed them to board the flights they hijacked, illegal aliens should be denied driver licenses. Governor Brewer is following the recommendation of the 9/11 commission while Obama is not.

The union heads for both the Border Patrol and ICE (immigration and customs enforcement) are boldly charging the Obama Administration with ordering their agents to break their law enforcement oaths by helping carry out a unilateral executive policy to grant temporary amnesties and work permits to perhaps 1.4 million illegal aliens. The Obama administration is threatening the agents with reprimand and even termination if they continue to enforce the immigration laws passed by Congress. Ice and the Border Patrol are the first line of defense in protecting our "homeland". Their job is to keep America safe and prevent millions of illegal aliens from pouring across our borders to compete for jobs and to drive down our wages. They are also the first line of defense against terrorists who infiltrate our borders with the intent to harm us.

We owe Governor Brewer, Sheriff Arpaio, and the thousands of ICE, Border Patrol, and other law enforcement officers a debt of gratitude for standing up for what it right even when it is politically dangerous. We can repay that debt by taking our country back in November.
Go Back