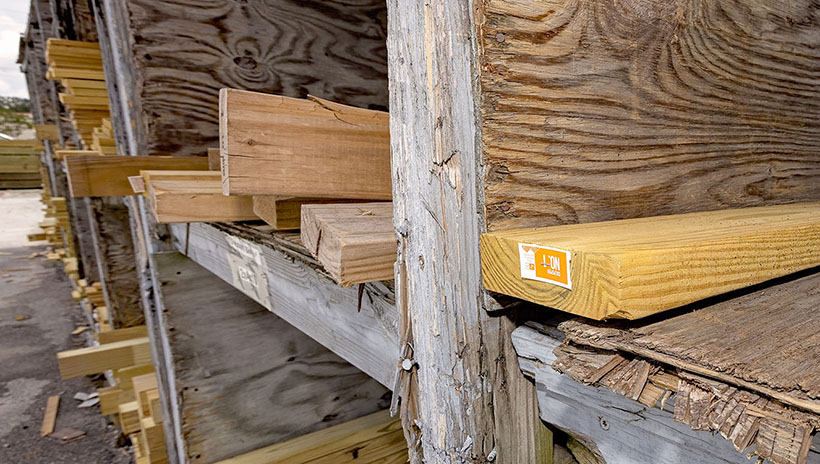 Have you seen the internet meme of a dressed-to-the-nines couple having dinner in a lumber yard? It reads, "Take me somewhere expensive!"

Expensive is the word that best describes lumber these days. Soaring wood costs have already added more than $24,000 to the price of the average new U.S. house, according to the National Association of Home Builders. Smaller projects have also jumped in cost.

"Lumber became the toilet paper of 2021," said Diana Haytko, professor and chair of the Department of Marketing and Supply Chain Management in the East Carolina University College of Business. A variety of factors, she said, from beetle infestations in Canada and wildfires in California to labor shortages in the Southeast have contributed to the rise in prices. 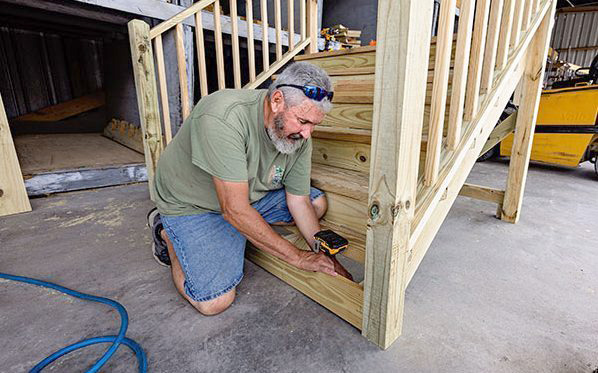 Manuel Burgos works on steps at Salt Wood Products in Greenville.
For example, the number of people working in U.S. sawmills and doing wood preservation is down roughly 30% from 20 years ago, with the number of loggers dropping almost 40%, U.S. Bureau of Labor Statistics data show.

In addition, Haytko said, employees working from home during the pandemic have boosted demand for lumber products, either for their own renovations or their desire for new homes. "It's a supply chain issue all along the way," she said. "The housing industry everyone thought would tank because no one wanted to look for houses due to COVID. It went the other way.

And building material prices have reflected that. For example, oriented strand board, used in sheathing, roofing and flooring a typical house, has nearly quadrupled from just under $10 for a 4-by-8-foot sheet to more than $36, said Dan Thomas, a teaching instructor in the ECU Department of Construction Management and former general contractor. "A house may use a couple hundred sheets of it," he said.

Overall, lumber prices have tripled in the past year, climbing to about $1,300 per thousand board feet — the standard industry measurement — in the first week of June. And that's down from almost $1,700 on May 7 as vaccinated Americans look more now to booking vacations than renovating homes, according to the website Trading Economics. In early June 2020, the price was $362 per thousand board feet, the website reports.

"I've been in the business for well over 25 years, and I've never seen anything quite like this," said Van Isley, an ECU alumnus and founder and chief executive of Professional Builders Supply in Morrisville.

Isley said the hike in prices has created a need for additional working capital and affects revenues depending on how quickly suppliers can pass along costs.

"As of today, most of our customers are able to pass along the increases, and the new home market remains vibrant," he said. "The real concern is how long that can last and whether or not the rampant inflation in lumber prices coupled with increases across other product categories (such as drywall, roofing and appliances) ultimately slows or completely quells the vibrant demand we are currently seeing."

A bigger issue, he said, is the lack of supply. Three primary types of lumber go into building a new home: spruce-pine-fir from Canada and the Pacific Northwest, southern yellow pine from the Southeast and oriented strand board, which is manufactured throughout the U.S. and Canada. Pests, fires, and labor and trucking shortages have affected all of them.


"Lumber became the toilet paper of 2021."
– Diana Haytko, Department of Marketing and Supply Chain Management chair and professor
"Our supply has been very tight," Isley said. "For the most part, we have been able to stay slightly in front of the curve with a couple of minor exceptions. We have had to turn away numerous new business opportunities in order to ensure we have adequate supply for our longer term, loyal customers. I equate it to the proverbial duck on the water analogy: On the surface things may look relatively calm, but there's a whole lot of frantic paddling going on below the surface."

As for when prices will return to normal, Isley guesses later this year at best. "There's just too much backlog and too many starts in the pipeline to see it much earlier than that," he said. "Even if production capacities are increased to better meet demand and raw material shortages cease, there are still just too many variables.

"I could see a 10-to-15% 'correction' later this summer or into the fall, but I do not anticipate seeing a larger decrease until later in the year and maybe even into 2022," he said.

Isley notes that lumber and building material producers have had generally low profit margins since the Great Recession of 2007–2009, and some of what is happening now could be characterized as a catch-up. "I do expect prices to fall at some point but not necessarily to pre-2020 levels," he said.

Haytko agreed. "Not anytime soon," she said. "I think we're in for these high prices for at least a year."

ECU alumnus Gary Salt has worked in the lumber industry since 1976, first with his father's company in Cove City and then his own Salt Wood Products retail business in Greenville.

"I've seen some strange things happen in the lumber industry, but I've never seen anything like this ... you never saw lumber double in price in a season," he said. "Our treated lumber sales have dropped. We have adequate supply, but I'm not buying any more than I absolutely have to."

One potential benefit of the rise in the price of lumber is that alternative building materials and processes, such as insulated concrete form homes, which offer improved energy efficiency and extreme weather capabilities, and composite decking boards, which don't splinter or rot, have become comparatively affordable.

"You're crazy not to build an ICF home, because it's not a premium anymore," Thomas said. "Alternative products have become much more competitive."

At ECU, lumber prices alone are not affecting the cost or pace of building and renovation projects, which don't use significant amounts of wood. But the overall rise of construction materials and labor is.

"While lumber is used on all construction sites, there are other materials that have been impacted with increases, such as steel, metal studs, drywall, epoxy and others," said Bill Bagnell, associate vice chancellor for campus operations. "We've also been told on a number of current projects that there are delays in the delivery of certain construction materials that could impact the completion dates. Additionally, we have seen the contractors for certain kinds of work are either very busy and unavailable to bid our work or have simply left the industry and are not there."

Bagnell said material costs have increased anywhere from 20% to 50% — some more. "I had a contractor at my house ... who indicated that he just paid $66 for a sheet of OSB."
Go Back