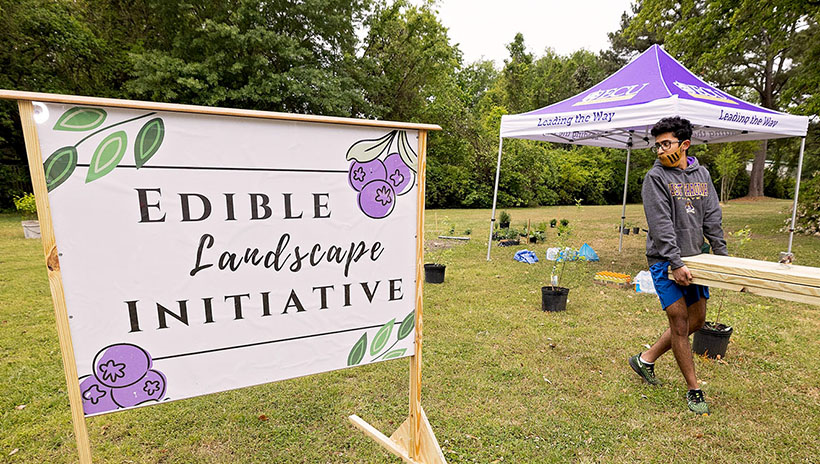 Ethan Patel carries wood with Jonathan Hurst (out of frame) past the sign at the Edible Landscape Initiative orchard. The team built raised beds for some of their plantings. | Photos: Cliff Hollis

A group of East Carolina University Honors College students sought to improve sustainability by creating an orchard on campus.

"Our mission is to serve college campuses by giving students the ability to invest in the environment through the establishment of orchards," said Grace Harper, a member of the Edible Landscape Initiative team and an elementary education major. 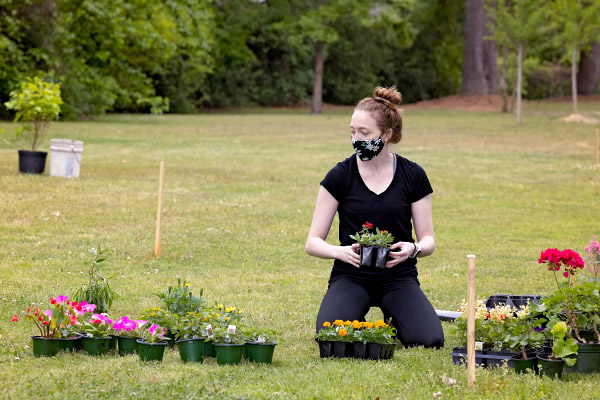 Grace Harper works in the orchard in the Stratford Arms area on Charles.
The idea for the orchard began during the students' freshman year in their HNRS 2000/3000 class, where students work in teams to tackle a problem they see in the world around them. After working on their idea for a year, five members of the group — Harper, Heather Mauzy, Jonathan Hurst, Ethan Patel and Jacob Coman — decided to continue their work and make it their signature honors project.

"Our group initially started with the idea of tackling the climate crisis but many of our ideas were unrealistic for where we were as a group," Harper said. "We decided to focus on a project that would create a ripple effect in the surrounding community. With our orchard, we hope to spread ecocentric ideas and help the community see how impactful and important the environment is."

The Edible Landscape team met with various officials across the university, including then-interim chancellor Ron Mitchelson. To help establish the orchard, Edible Landscape worked with University Advancement to launch a crowdfunding campaign that raised $6,464.

"Dr. Mitchelson has helped us in many ways and one of these was helping us explore ways that ECU supports student ideas and projects, which is how we found out about the crowdfunding initiative," Harper said.

Once their campaign ended, the team worked with its advisor to begin ordering plants for the orchard. The plans include apple, pear and persimmon trees; blueberry bushes; grape vines; an herb garden and a pollinator garden. The university gave the students permission to establish the orchard at the Stratford Arms property across from Clark-LeClair Stadium, which is accessible by ECU Transit.


"It’s not just about making an orchard or getting a group project to move forward. It’s about understanding that they can be change-makers, rather than seeing the headlines of what others have done. They’re the doers, and I think that kind of agency will take them so much further in their careers."
– Gerald Weckesser, team mentor
"College students are constantly on the go and have so many things to focus on that sustainable food for many is not even possible," Harper said. "By creating this orchard, even if students are not able to eat as sustainably as they would like, we will be able to teach and inspire students to start thinking in a more ecocentric way for a more lasting effect."

The Edible Landscape team started planting the orchard in late April and has started making connections with other on-campus groups to ensure the orchard continues to be a vital part of campus for years to come. The team is also planning future additions to the orchard.

"As we move forward, we are going to try and add some more decorative elements to make it a place that students and Greenville residents can enjoy," said Heather Mauzy, on behalf of the team. "We are really looking forward to seeing this project flourish as students learn the importance of maintaining the environment. We can't thank everyone enough for all the support and we are excited to continue moving forward."

The team's mentor, Gerald Weckesser, is most impressed by the grit and resilience the students have shown throughout the process.

"This team has always been able to face the potential of failure and have gotten some no's, but they always have taken lessons from those experiences to turn them around and keep on with the spirit of their mission," he said.

Watching this team progress throughout the past two years has been rewarding and an example of how the curriculum the Honors College faculty team designed can help students make a difference, Weckesser said.

"It's not just about making an orchard or getting a group project to move forward," Weckesser said. "It's about understanding that they can be change-makers, rather than seeing the headlines of what others have done. They're the doers, and I think that kind of agency will take them so much further in their careers."