Senate Budget Offers Bonuses and Raises for State Employees, Deeper Tax Cuts for All | Beaufort County Now | "This surplus came largely out of the pockets of North Carolina citizens and they deserve to see some of it returned to them."

Published: Sunday, June 27th, 2021 @ 9:11 am
By: Carolina Journal   ( More Entries )
Publisher's Note: This post appears here courtesy of the Carolina Journal. The author of this post is Dallas Woodhouse. 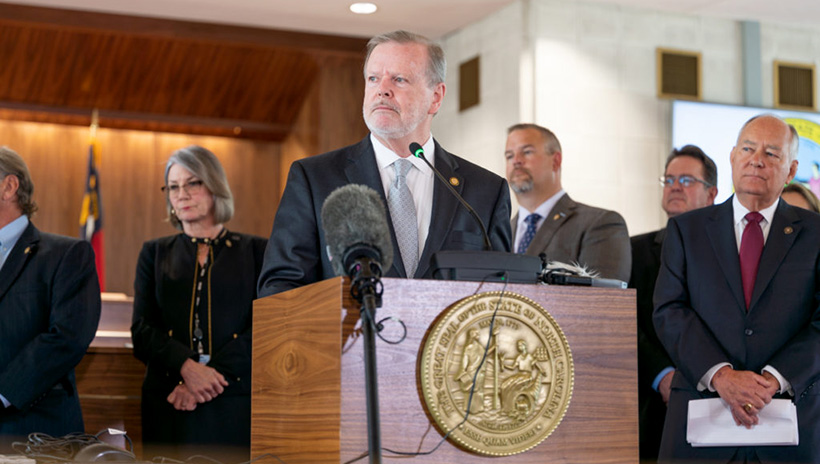 In a press conference Monday afternoon, Republican state senators presented a state budget proposal they say is grounded in North Carolina's strong fiscal position after a decade of prudent budgeting. The Senate proposes returning a portion of surplus revenues to taxpayers and advancing needed capital infrastructure projects in their version of the two-year budget.

Senate leaders said they expect to pass the budget proposal by the end of this week.

Under the Senate plan, North Carolina's personal income tax rate would be cut again, falling from 5.25% to 4.99% next year and 3.99% by 2026. The proposed rate reduction would lead to a tax rate less than half as high as the top rate in place during much of the 2000s, when Democrats controlled the legislature and held the governor's job. The top tax rate reached higher than 8.25% under Democrats. Since taking control of the General Assembly, Republicans eliminated the state's multitiered tax system. They also have cut income tax rates consistently since 2013.

The Senate's proposed 2021–23 budget also sets in motion a 10-year, $12 billion cash infrastructure and capital plan, including $3 billion in cash over the next two years for projects.

"Smart fiscal policy has allowed North Carolina to be in a much better position than many other states - and this balanced budget proposal is proof," said John Locke Foundation President Donald Bryson. "Taxpayers are not a limitless bank where lawmakers can casually make withdrawals."

"The Senate recognizes that state government revenue flows from the fruit of taxpayers' labor," Bryson added. "The N.C. Constitution guarantees citizens the right to the fruits of our labor, so government should take as little of that money as possible. It's great to see that senators are looking beyond their initial proposal. They want to see the tax rate drop below 4%. If their plan succeeds, prudent conservative fiscal leaders will have cut the income tax rate nearly in half since 2013."

"This proposal is a win for every taxpayer, including teachers and other state employees," Bryson said.

As previously reported by Carolina Journal, the Senate budget will include the chamber's tax reform and reduction plan. Along with the rate reduction, the plan increases the zero-tax bracket from $21,500 to $25,500 for married filers, taking more than 200,000 North Carolinians off the tax rolls completely.

"A decade of responsible budgets and growth-oriented tax policy has North Carolina in the best fiscal shape in a generation,' said Senate Leader Phil Berger, R-Rockingham, in Monday's press conference. "This surplus came largely out of the pockets of North Carolina citizens, and they deserve to see some of it returned to them."

The state Senate's budget plan also provides for a 3% raise for teachers and state workers over the two years and $1,500 one-time bonuses for all teachers and state employees who make less than $75,000 annually. Those who make more would get a $1,000 bonus.

Corrections officers would get more, with an average 7% raise, depending on experience level. These would be the first raises any state employees have seen in two years after Gov. Roy Cooper vetoed the state budget last year.

Senators also would phase out the state's 2.5% corporate tax rate by 2028 and change the way companies calculate their franchise tax burden.

"A decade of smart governance means we're now in a position to use cash, not debt, to improve North Carolina's infrastructure — while simultaneously cutting taxes," said Sen. Kathy Harrington, R-Gaston.

In addition to the budget and tax cut plan, the Senate's proposal spends $3 billion over the next two years on capital and infrastructure projects. That money is part of a larger 10-year, $12 billion "cash" plan tied to the Senate's budget.

A pay-as-you-go approach to capital projects sets the Senate apart from Democratic Gov. Roy Cooper. His March 24 budget plan called for a $4.7 billion statewide bond package. Rather than using cash on hand, Cooper would ask voters to approve borrowing money for building projects.

Less than a week after the Senate approved its standalone tax bill, lawmakers learned that N.C. state government had collected $6 billion more than expected in taxes.

Funding for the following projects is included in the Senate's proposed budget, according to Senate leaders.


Once the Senate votes and passes its budget proposal, the House will study the Senate plan and offer its own version. A conference committee of appointed budget negotiators from both chambers will draft a final plan. Both chambers will vote on that plan, then send it to the governor for his approval or veto. Cooper has vetoed every budget sent to the executive branch since 2017 during his tenure as governor. If a budget is not signed, and if lawmakers fail to override a veto, state law establishes that the previous year's budget continues to remain in effect.
Go Back