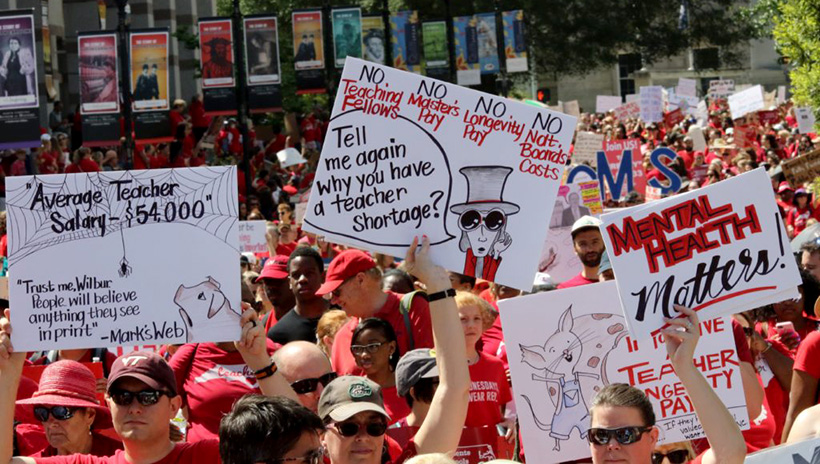 Teachers walked out of work and rallied at the N.C. Legislative Building on May 1, 2019. | Photo: Don Carrington / Carolina Journal

Democrats and their left-leaning allies offered the same criticism they have over every state budget Republicans have proposed over the last decade, beginning with their first budget after voters handed the GOP control of the General Assembly in 2010.

Democrats say, as they have time and time again, that the GOP is not spending enough money, cut taxes too much, and does not offer enough for teachers.

Carolina Journal reported the details of the proposed NC Senate budget on Monday 6/21/2021. The Senate proposed spending plan is expected to pass by the end of the week.

The House will then pass its version of the state budget, likely before July 4, with the House and Senate sending a compromise version of the budget to Gov. Roy Cooper around July 15.

The North Carolina Association of Educators, the teacher's union, teamed up with Gov. Cooper two years ago to block a state budget from being passed, costing educators nearly a 5% raise. Still, the NCAE was quick to attack the GOP Senate budget again, complaining that a 3% raise along with a series of bonuses was not enough.

"When presented with $6.5 billion in unexpected revenue, the NC Senate has opted to reward North Carolina educators for working nonstop to support our students through the most difficult school year in history with a pitiful 1.5% annual pay raise," said NC Association of Educators President Tamika Walker Kelly. "This proposed budget shows that corporate tax cuts take priority over North Carolina students yet again."

It's not that those teachers don't have a legitimate argument for higher raises. The state does have a record surplus. Should policymakers choose to do so they could increase salaries for teachers and state workers a bit more and still offer significant tax cuts.

This is an argument advanced by Gov. Cooper before the NC Senate released budget details, but set a self-imposed spending limit.

"Legislative leadership is well aware that this opening announcement falls far short of what our state needs," Cooper spokesperson Ford Porter said in an email to the N&O. "Real negotiations must occur, and the Governor looks forward to working toward an agreement."

Despite the fact that most of the Senate's proposed tax cuts are aimed at citizens that pay North Carolina's personal income taxes, including removing many low-income payers off the tax rolls altogether by raising the standard deduction, Cooper uses the same tired attack on any tax cuts to business.

However, the Republican-proposed tax cuts in the Senate bill are unlikely to get support from the governor.

"The last thing we need is more sweeping tax breaks for corporations and the wealthiest among us instead of investments in our hard-working families and communities," said Cooper spokesman Ford Porter.

"I think this year stings a little bit more, that slap in the face, even though we're kind of used to it," Justin Parmenter, a Charlotte-area educator, told WCNC, "It stings more because we've just been the most difficult school year they probably most educators can recall."

However, the early criticism of the GOP budget overall has been muted. Fewer Democrats have expressed outrage, at least at this early stage. As CJ wrote recently a handful of legislative Democrats will hold the keys to higher spending their caucus wants, but only if they cross the aisle and work with Republicans.

Is the budget dawn breaking? Only time will tell.
Go Back