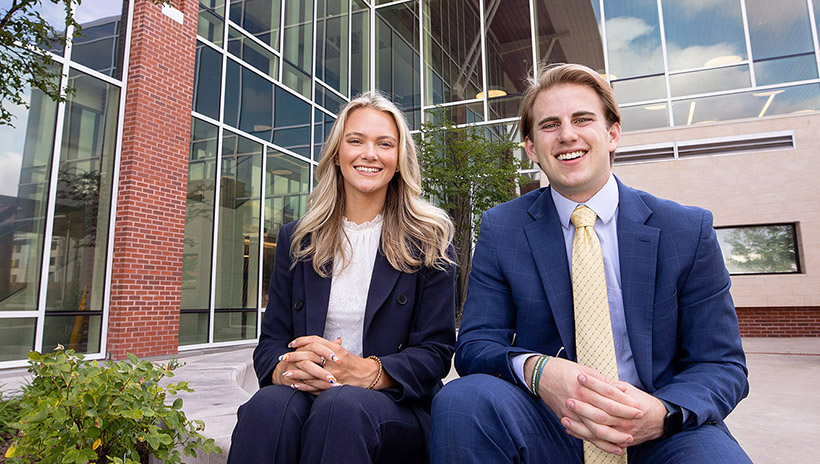 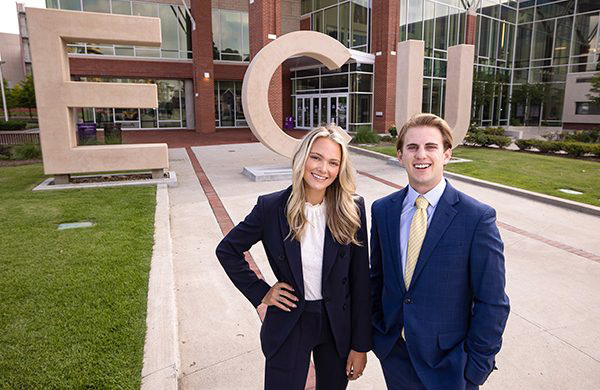 Slade and Ward are working to increase student engagement in ECU’s Student Government Association.
The duo, both pursuing degrees in business, was elected in April on four main campaign initiatives: to address on- and off-campus safety; increase awareness about SGA; improve transparency surrounding university decisions; and focus on mental health — of special concern coming out of the pandemic.

"We want to make sure everybody's voices are heard, and all these issues are being taken care of," Slade said.

As student body president, Ward also serves on the ECU Board of Trustees and will be sworn in at the trustees' July 23 meeting.

Ward and Slade are bringing new perspectives to SGA since neither had been involved in the association before running for office. Both have been leaders in College of Business organizations and Greek life, bringing those skills and an emphasis on marketing to engage students.

"We sort of felt like some students might struggle to understand all the important things that SGA does," Ward said. "We want to focus on the marketing of SGA but also to help other student organizations market themselves. It's certainly hard for an organization to promote their ideas and beliefs if no one's listening."

While fewer students were physically on campus this spring, Ward and Slade were able to meet with members of several large organizations including ROTC, Greek life and athletics. If they had a contact or relationship with a student organization, they tried to get in front of them, Ward said. They also used online meetings through Zoom and Teams to gather input on what is important to ECU students.

"It definitely opened our eyes to a lot of things, stirred some ideas and helped shape our platform as we were able to dive into conversations with them," Ward said.

The Executive Cabinet serves as the leadership team for ECU’s Student Government Association. Cabinet members meet each week in the SGA conference room in the Main Campus Student Center. Click HERE for more information.
While many in-person meetings were not possible, Ward and Slade said they have grown as leaders in connecting large groups of people as never before.

"It made me look at a lot more resources that I never would have used, and made me be creative on how you lead," said Slade, who is recruitment chair for Chi Omega sorority and involved in the Panhellenic Association. "It has sharpened my leadership skills immensely. That's one of the bright sides of the pandemic — there are so many ways to connect."

Another takeaway has been the ability to adapt to change, Ward said. "It showed us that we have the power and ability to pivot when needed, which I think is a really important characteristic as a leader," he said. "A lot of people are looking to you as a leader to help navigate 'where do we go from here?'"

Ward has gotten to know and interact with city leaders and area business owners as a member of Kappa Alpha, the Interfraternity Council, University Neighborhood Association and Greenville's Uptown Board of Directors.

A Raleigh native, Ward said he liked the campus' close-knit feel with all the amenities of a large university when he was picking schools. He wasn't a stranger to campus: His mother grew up in Greenville and his father and brother are ECU alumni.

Initially Ward planned to major in science and eventually attend medical school. While he still enjoys science, he took several business courses that he really enjoyed and charted a new direction. He is majoring in business administration with a concentration in finance and plans to work in pharmaceutical or medical device sales after graduation.

For Slade, she already knew ECU, having grown up 45 minutes away in Bath. She intended to major in elementary education but found that she enjoyed the marketing aspects of events and activities. She switched her major to business administration with a concentration in marketing and sales.

"I learned how important marketing is. It's how you get the word out, and marketing now is what people look at first," said Slade, who through her sorority has helped raise funds for Make-A-Wish Foundation and volunteered with the annual Aces for Autism banquet.

"Greek life got us started in making a ton of connections, and everybody who's involved in that is involved in multiple other organizations so making those connections can connect you outwards," Slade said. "It really impacted me and made me meet so many people."

Making personal connections is key in advocating for ECU's almost 30,000 students, she said.

"We sat down with each director for each committee and asked, where are we right now, what's gone well over the past two years, and in addressing the strengths and weaknesses, asked where can we improve, where can we go from here, how can we increase student engagement across all these different initiatives," Ward said.

Outgoing SGA president Tucker Robbins and former SGA treasurer Morgan Fried, who also ran for president this year, have been great resources, along with SGA faculty and staff advisers and everyone involved in the organization — which helped Ward and Slade as new members.

Ward is looking forward to joining the ECU Board of Trustees as his first official meeting approaches.

"I'm excited to join the board and especially pushing that platform initiative — increasing transparency — because this is a great channel for me to do that," he said. "It also provides a lot of university insight that no other student has."
Go Back