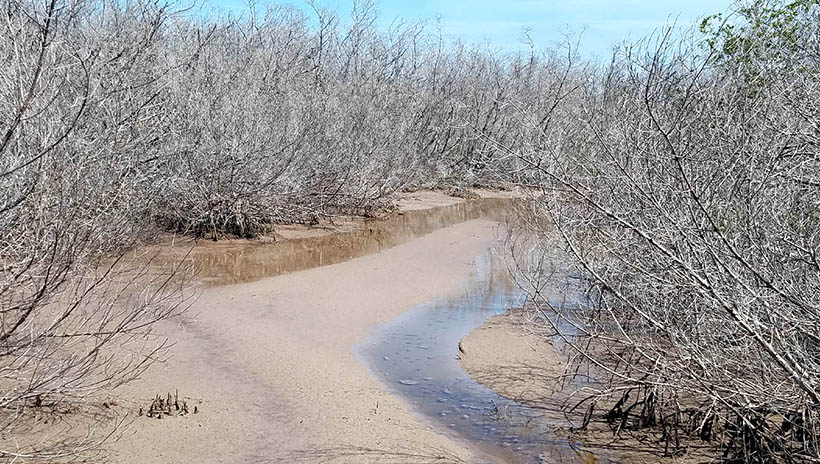 A research study led by East Carolina University assistant professor David Lagomasino studied potential reasons for mangrove forest dieback in Florida after Hurricane Irma in 2017. His findings could have implications for how other states, like North Carolina, manage the coast to prepare for extreme weather events. | Photos: Contributed

A new paper published by an East Carolina University researcher in the Department of Coastal Studies shines light on the effect human-made infrastructure and natural topography has on coastal wetlands after major storm events.

In partnership with NASA and Florida International University, the study, led by assistant professor David Lagomasino, was published in the July edition of Nature Communications. 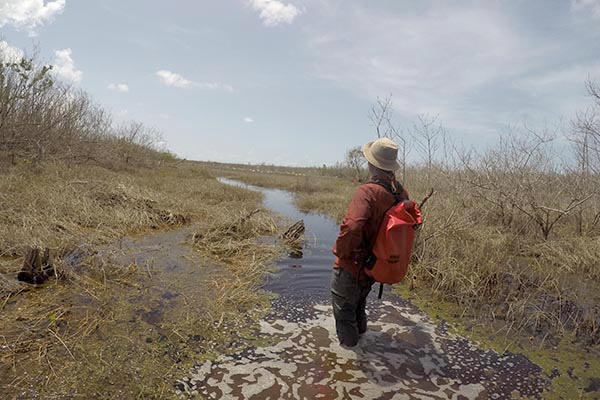 Despite resilient grow back in the past, Lagomasino and his research team estimate that nearly 11,000 hectares of mangrove forest, about 27,000 acres, failed to regrow at their previous levels after Hurricane Irma.
The study focused on the effects of Hurricane Irma, which struck Florida in 2017, and the damage it caused to the state's mangrove forests. The research team found that the forests suffered unparalleled dieback after the major hurricane.

Mangrove forests are often damaged after hurricanes, but Lagomasino said forests in Florida have shown great resiliency in the past due to their structure, position and species composition. After Hurricane Irma, the forests did not rebound at the same rate. Nearly 11,000 hectares — a space the size of more than 24,000 football fields — showed evidence of complete dieback following the storm.

For a resource that prevents more than $11 billion in annual property and flood damage in the state, that's a major concern, Lagomasino said.

"There have been significant storms in the past that have led to damage, but Irma seems to have caused one of the largest areas of dieback, at least in the satellite record," Lagomasino said.

After studying satellite and aerial footage of the region, the research team was able to pinpoint potential explanations for the dieback, including human-made obstacles.

"Human-made obstacles, as well as natural changes in topography, can impact the flow of water through an area," Lagomasino said. "Things like roads and levees can restrict or stop the flow of water between areas that were once connected. The lack of connection between the water can lead to extremes — extreme dry conditions and extreme wet conditions, both of which can be stressful on wetland vegetation that thrives in more stable conditions."

The study noted that human-made barriers can lead to an increase in how long water stays on the surface, which can cause rapid degradation of fine root materials. Increased saltwater ponding may occur when storm surge is high and barriers obstruct water flow.

These results are not only key for future storm planning in Florida, but other coastal states like North Carolina, Lagomasino said.

"What we have learned in Florida can be useful to North Carolina and other coastal regions," Lagomasino said. "Our results indicate that the elevation of the landscape, the connectivity of water across the landscape, and the height of storm surge can indicate vulnerable areas. In other words, low elevation areas that are disconnected or do not have the capability to drain after being flooded are more susceptible to long-term damage.

"This is useful for understanding the resilience of coastal forests and wetlands in North Carolina and may also be important in predicting urban areas that may also be less resilient to these extreme events."

The study suggested changes that can be made to improve coastal resiliency in the future when facing severe weather events, including:


"We hope that the information from our research will help improve the recovery process after storms," Lagomasino said. "If these areas can be identified ahead of time, then the disaster response can address issues in hard-hit areas much faster or minimize the impact beforehand.

"The big takeaway here is that intense winds do a lot of damage during hurricanes. However, the intensity of damage does not necessarily coincide with the ability of the system to recover over time. Other factors, like slight changes in the elevation of the coastal landscape and storm surge, play a significant role in how the ecosystem recovers or does not recover after the initial damage. Having these factors in mind prior to hurricane season can help lessen long-term impacts in vulnerable communities."
Go Back