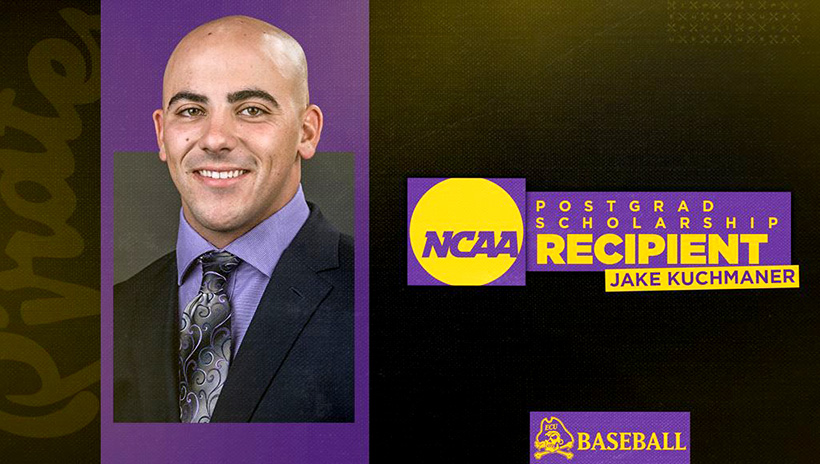 GREENVILLE, N.C.     East Carolina pitcher Jake Kuchmaner has been named one of 21 male student-athlete recipients for the 2021 Spring NCAA Postgraduate Scholarship, the organization announced Friday. With his selection, Kuchmaner will receive a one-time non-renewable scholarship of $10,000 for use in an accredited graduate program.

"This is a tremendous honor for Jake, who has worked tirelessly in the classroom to earn his degree," East Carolina Head Baseball Coach Cliff Godwin said. "When I think of characteristics for what a student-athlete should be, Jake is what I envision. He has been a leader for us on the field, in the classroom and in the community since the first day he stepped on campus in the fall of 2017. We are excited that Jake will be coming back for another year and working on his postgraduate degree."

Kuchmaner graduated in May of 2021 with a degree in business management and a minor in psychology while earning a 3.83 cumulative grade point average. He is a four-time American Athletic Conference All-Academic selection, an eight-time ECU Director of Athletics Honor Roll member and a two-time ECU Student-Athlete Advisory Committee (SAAC) President. Kuchmaner, who is currently pursuing his postgraduate degree in kinesiology (sport and exercise psychology), has helped the Pirates earn four consecutive AAC and three-straight American Baseball Coaches Association (ABCA) Team Excellence Awards since 2018.

"I am very thankful for the opportunities that have been presented to me at East Carolina," Kuchmaner said. "I have been given an incredible amount of support from so many in the athletic department, especially Danielle Morrin, Caroline Bevillard, Cal Christian, Sharon Justice, Coach Godwin, Jon Gilbert and Rebecca Wade. I have really enjoyed my time at ECU and I am excited to be a part of the Greenville community for another year. Go Pirates!"

On the field, he has appeared in 47 games (37 starts) and posted a 17-6 mark with a pair of complete games. The lefty has struck out 149 batters in 185 innings, allowed 90 runs (81 earned) and sports a 3.94 ERA. A first-team all-conference selection in 2019, Kuchmaner tossed the first perfect game in ECU history when he struck out eight during the Pirates' 3-0 win at Maryland on March 17.

About the NCAA Postgraduate Scholarship

All former student-athletes who earned an undergraduate degree from an NCAA member school are eligible to be nominated by that school for an NCAA graduate degree scholarship, regardless of when they received their undergraduate degree. Nominations include a personal statement from the nominee; a factual list that includes all of their honors, awards, activities and four letters of endorsement.

The NCAA Postgraduate Scholarship was created in 1964 to promote and encourage graduate education by rewarding the Association's most accomplished student-athletes through their participation in NCAA championship and/or emerging sports. Athletics and academic achievements, campus involvement, community service, volunteer activities and demonstrated leadership are evaluated.
Go Back