Supply Chain Snags and ABC System Disrupt Private Liquor Business | Beaufort County Now | Ollie Mulligan, this week from an airport somewhere in the Northeast, talked about his upcoming flight home, about returning to his native Ireland, to County Kildare. 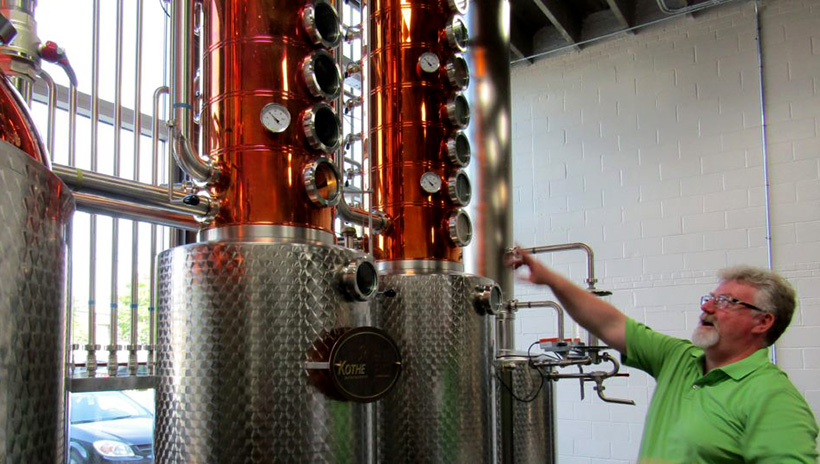 Ollie Mulligan, this week from an airport somewhere in the Northeast, talked about his upcoming flight home, about returning to his native Ireland, to County Kildare. He thought aloud about the bright, rolling green fields. Of horses, and of Guinness.

Mulligan, turning the conversation, started talking about his businesses in his other home, of Great Wagon Road Distilling Co. in Charlotte — which makes the popular American single-malt whisky Rua — and the Broken Spoke, a bar and restaurant accompanying the distillery in Charlotte's North Davidson neighborhood.

Mulligan's Irish accent is pleasant, welcoming. It develops a bit of an edge when he turns serious. As when he starts talking about myriad disruptions merging to squeeze the world's supply chains, as the Wall Street Journal recently reported — "from the pandemic-driven rise in consumer demand for tech goods to a backlog of imports at clogged California ports to U.S. factory outages caused by weather woes," the newspaper reports.

Mulligan attributes the issue to many factors, including issues surrounding labor shortages, transportation problems due, in part, to labor shortages, as well as problems with packaging. A global glass shortage adds another layer of frustration for people who make liquor, including Mulligan, who's having a hard time getting bottles. Shelves in Mecklenburg County are bare, he said, at least by pre-pandemic standards.

The shelves, which the N.C. Alcohol Control Bureau oversees, are bereft of some popular global brands, says Mulligan, including Jameson's, the world's top-selling Irish whiskey, his customers tell him.

Drink Quinn's, Mulligan's own small-batch, barrel-rested whiskey, he jokes back.

"It's better," he laughs and tells CJ.

The situation isn't unique to Mecklenburg County, as bar owners from around the state converge on social media complaining of shortages, many aiming their vitriol at the N.C. ABC, which operates two warehouses in Raleigh, from which all in the state is distributed, and a satellite warehouse in Charlotte.

"There's a huge supply chain issue," Mulligan told Carolina Journal. "All this added together has caused this issue. A lot of our customers are beside themselves."

The retail demand for spirituous liquor has remained high, even as more bars and restaurants have opened in recent months, straining the supply even further, says N.C. ABC spokesman Jeff Strickland told CJ.

"Broadly speaking, there have been strains on the global supply chains of a variety of products throughout the entire pandemic, and not just here in North Carolina."

That's certainly true, but the N.C. system is broken, say the bar owners and distillers who haven't figured out — or flat-out refuse to — take advantage of the state's monopolistic methods of storing, distributing, and selling spiritous liquor. From the clunky, arcane online system owners use to order liquor, which, some owners say, does a lousy job of tracking inventory, forcing users to search for codes and even bottles, which are placed in multiple categories, including several, for instance, for bourbon.

The ABC says it's working on it.

The ABC Commission in March voted unanimously to recommend the state award a 10-year contract for warehouse services to LB&B Associates, the current vendor and target of an audit in 2018 that has over previous years cost the state about $13.5 million. The agreement, the ABC says, includes a requirement of nearly error-free and on-time deliveries as well as increased delivery frequency to the state's 171 local ABC boards.

"The new contract will involve a comprehensive computerized warehouse management and operations platform that will include backorder capability and increased visibility into real-time warehouse inventory that the local boards have indicated are service priorities," the ABC said in a statement.

Nevertheless, the system, as it stands, is burdened by a lack of knowledge, a problem compounded by the lack of supply, says Brandon LaRoque, who, with his wife, Amanda, owns the Goat in Raleigh. The bar, which is, technically "private," is a cozy hangout stocked with hard-to-find spirits and common brands, reminiscent of the comfortable neighborhood bars lining the streets of old steel and coal towns in Pittsburgh and Cleveland.

Brandon, to keep supply steady, admits to "stockpiling" bottles highlighted in monthly ABC sales. Amanda calls it "hoarding." It's sort of an inside joke.

Still a necessary precaution, so to speak.

"Nobody knows how bad it is, except for the bar owners," Brandon says of navigating the ABC system and securing products, especially now."

Says Strickland, "The ABC Commission is constantly working and communicating with suppliers to ensure they keep products in stock, as well as with the local ABC boards to help find solutions to specific product issues they may have."

The LaRoques consistently lobby for representation on the Wake County ABC board, and even the local boards, of which there are 170. North Carolina implemented the board system 84 years ago, primarily to appease towns and municipalities, that would rather continue Prohibition, with a cut of the money made from liquor sales. Bars and restaurants, for instance, pay dearly, as much as an extra $8.75, in the form of taxes, per bottle, depending on its size.

"It's always been a battle," Brandon says. "Not the people, but the system."

The N.C. ABC Commission and its boards run more than 430 stores. The state, according to the 2020 annual report, sold about $1.3 billion worth of spirituous liquor and fortified wine in ABC stores in the fiscal year ending June 30, 2020, with total revenue distributions amounting to some $529 million to the state's General Fund and the cities and counties where alcohol sales are allowed. In the previous fiscal year, retail sales totaled about $980 million.

The Mecklenburg County ABC Board, in a news release, says that, since March, sales to on-premise businesses have already sold 65% of all the bottles that were sold in 2020, and that retail sales were more than 50% of that, compared to last year.

Keva Walton, CEO of the Mecklenburg ABC Board, in a statement said the board is "very aware of how these trends and disruptions impact our customer purchase preferences and supply to our on-premise business customers.

"Our team is working extra hard to keep our stores stocked with the shipments we receive as soon as we receive them. We will continue to provide alternative spirit brands, where there might be a lower availability of preferred brands, when possible."

Gov. Roy Cooper, for his part, closed private bars in March 2020, allowing them to reopen, at limited capacity, in February. Things have since crawled back to somewhere south of normal.

A problem now — at least one of them — is staffing. Before the pandemic, the Goat employed five people. It's now down to two, not counting Amanda, who works behind the bar at least one day each week. The LaRoques, which had stayed open until 2 a.m., now close at 11.

In way of comparison, South Carolina, which sells liquor in a free market, has no such problems regarding supply, say multiple reports.

"We don't have a shortage at the moment," Josh Martin, assistant manager at a liquor store in Lake Wylie, South Carolina, told the Charlotte Observer, as reported by The Associated Press.

"Martin," the AP reports, "said his store is seeing an increase in sales in part because of the shortage on some liquor brands in North Carolina."