ECU Heads to Longwood for Exhibition | Beaufort County Now | With just less than two weeks until the season opener, the East Carolina soccer team will get its first warmup test as the Pirates travel to Longwood for a Tuesday afternoon exhibition.

ECU Heads to Longwood for Exhibition 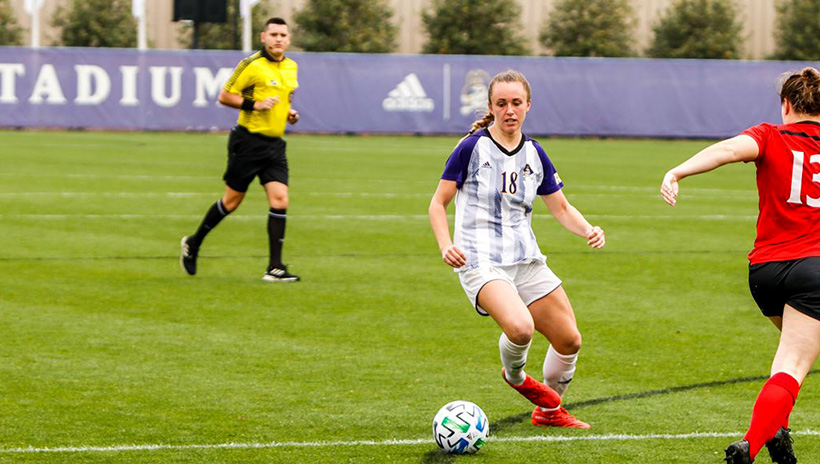 GREENVILLE, N.C. — With just less than two weeks until the season opener, the East Carolina soccer team will get its first warmup test as the Pirates travel to Longwood for a Tuesday afternoon exhibition.

"We had a good first week together and are excited to implement the things we worked on against an opponent," said Head Soccer Coach Jason Hamilton. "With the amount of depth we have in our program this year, we want to get a lot of people an opportunity to play. Not having to put so many minutes on our bodies early in the season will help us stay fresh and healthy as we get into nonconference and conference play."

The Pirates return four players who earned postseason honors in the pandemic-shortened 2020 campaign. For the second consecutive season, Kim Sanford played nearly every minute in the center of the Pirate defense and she did it at an All-Conference level, being named AAC Second-Team All-Conference for the second time. Joining her on the All-Conference team was Carsen Parker. Parker started the year as Sanford's partner at the center back position, scoring the game-winning goal against Houston and being named the AAC Defensive Player of the Week. Midway through the year, Parker was moved up front and finished the season with a team-high four goals and three assists, becoming the first player in AAC history to be named AAC Defensive and Offensive Player of the Week in the same season.

Maeve English had one of the best rookie seasons in program history, starting all 11 games in the goal for the Pirates. The Greenville, N.C., native was a three-time AAC Goalkeeper of the Week, the most for a freshman in conference history, a unanimous selection to the AAC All-Rookie team and earned a spot on the AAC Championship All-Tournament team. Joining English on the All-Rookie team was Annabbelle Abbott, who started all 11 games and finished with a goal and an assist.

Tori Riggs, Morgan Dewey and Catherine Holbrook are the other Pirates who return after scoring last season. Riggs leads all Pirates with eight goals and seven assists in her career and had a goal and two assists last year. Dewey also had a goal and two assists last year and has six assists in 30 career games as a Pirate. Holbrook had one goal in 2020 while Sydney Schnell had one assist, meaning 73.5% of ECU's scoring from last season returns along with nearly all of the team's minutes on the defensive end.

Longwood finished the 2020 campaign with a 4-3-3 overall record and went 4-2-3 in Big South Conference action, eventually falling to Big South Champion High Point in the league's semifinal round. The Lancers were picked to once again finish in the top-four of the conference in the Big South preseason coach's poll. Longwood will be led up front by returning All-Big South forwards Alex Dinger (three goals) and Kiersten Yuhas (two goals, four assists) while All-South selection Kylie Cahill will be an integral part of the Lancer defense. That trio are three of seven returning starters for the Lancers.

Although East Carolina and Longwood have never met in an official match, the two programs have battled in exhibition matches on three occasions. In 2005, Longwood came to Greenville and the Pirates gave the Lancers a rude welcome, winning 3-1 behind a pair of goals from Meghan McCallion and a tally from Madison Keller. The two teams met again for exhibitions prior to the 2014 and 2015 seasons. The Pirates and Lancers played to a 0-0 draw in 2014 and a 1-1 tie in 2015, with Courtney Cash scoring for East Carolina.

"Unlike last spring with no exhibition games, this gives us an opportunity to see things and regroup after to talk about how we can improve," Hamilton added.

Kickoff for Tuesday's exhibition is slated for 2 p.m., at Longwood Athletics Complex. Full stats and recap will be posted on ECUPirates.com following the conclusion of the match.
Go Back