Published: Wednesday, August 18th, 2021 @ 2:58 am
By: Carolina Journal   ( More Entries )
Publisher's Note: This post appears here courtesy of the Carolina Journal. The author of this post is David N. Bass. 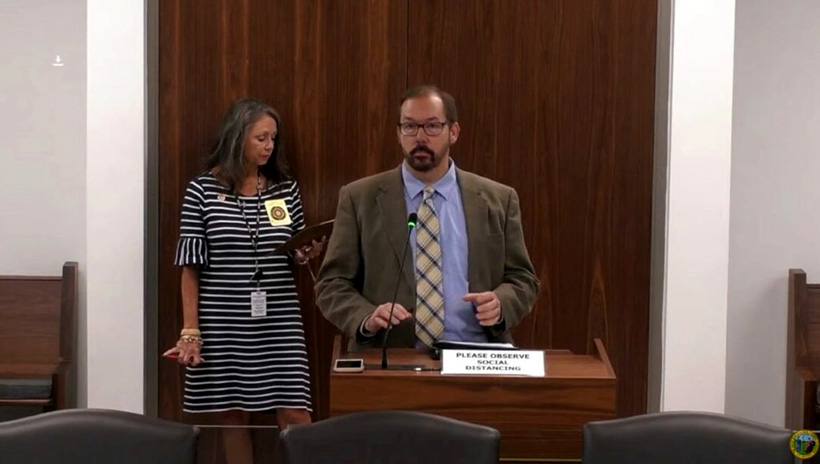 Dr. Andy Jackson, director of the Civitas Center for Public Integrity at the John Locke Foundation.

Members of a joint redistricting committee between the N.C. House and Senate on Tuesday, Aug. 10 heard public feedback on new criteria for drawing district maps.

Adopting the criteria is the first official step toward drawing legislative and congressional district boundaries for the next 10 years. The debate is setting the stage for another round of partisan squabbling and legal challenges that kept maps, which were drawn in 2010, in court for much of the past decade.

The criteria ban racial data or partisan composition from being used in drawing the districts while permitting map-drawers to consider where legislators live when setting district boundaries.

"I'm grateful that the joint redistricting committee's proposed criteria include a ban on political and racial data for redistricting," said Dr. Andy Jackson, director of the Civitas Center for Public Integrity at the John Locke Foundation. "The proposed criteria also include incumbent addresses. If these are included in the final criteria list, that consideration should be secondary to other considerations, especially compactness.

"On preserving communities of interest, that's generally accomplished by not splitting community units, particularly counties and voting districts, and, where practicable, municipalities," said Jackson, who spoke during the hearing. "Beyond that, claims of communities of interest — of which you're going to hear a lot over the next several months — are often in the eye of the beholder, and should be considered within the context of keeping districts compact and preserving political boundaries."


The public feedback period Tuesday was dominated by activists, predominantly from Durham and Orange counties affiliated with left-wing advocacy groups, including the League of Women Voters, Carolina Jews for Justice, Common Cause N.C., and Action N.C.

"Make this redistricting process fair, transparent, and inclusive," said Bob Phillips, executive director of Common Cause N.C. "I'll use the 'L' word here — litigation. The way to avoid it is not to engage in partisan and racial gerrymandering. Our job is to hold you accountable to the important task of drawing the lines in a fair and transparent manner."

Allison Riggs, co-executive director of the Southern Coalition for Social Justice, criticized both the race-blind map-drawing criteria and the criteria that allow for incumbent residency to be taken into consideration.

"As long as redistricting has occurred, it has been a tool used to harm voters of color," Riggs said. "It is entirely appropriate to consider race equity and to consider race in the drawing of districts to ensure that voters of color are not being cracked or packed ... we know that when you protect incumbents, you protect your ill-gotten gains from a decade of partisan and racial gerrymandering. You are fooling no one."


Sen. Ben Clark, D-Hoke, has emerged as a vocal critic of the Republican-led map-drawing. The day before the public hearing, members of the GOP took Clark to task for a bill he introduced as an alternative redistricting approach.

That measure, Senate Bill 511, would take map-drawing data analysis away from the legislature's nonpartisan central staff and give it to the N.C. State Board of Elections, which currently has a Democratic majority.

The board would then have the option of delegating further authority for developing cluster maps to the Department of Mathematics at Duke University. Dr. Jonathan Mattingly leads Duke's redistricting work and was an expert witness in challenging the GOP-drawn maps in 2019.

"The Democrats' definition of 'fair' is to wrest power away from a nonpartisan body and give it to a board they control and allow their own expert legal consultant to do all of the work," said Sen. Warren Daniel, R-Burke. "This is a stunningly brazen ploy, even for a group that gerrymandered themselves into power for more than 100 years."
Go Back