Patients file lawsuit against Mission Health, HCA for antitrust practices | Beaufort County Now | A group of residents from western North Carolina filed a lawsuit Tuesday, Aug. 10, against HCA Healthcare and Mission Health alleging the anti-competitive business practices have driven medical prices up and the quality of health care down in that part of the state. 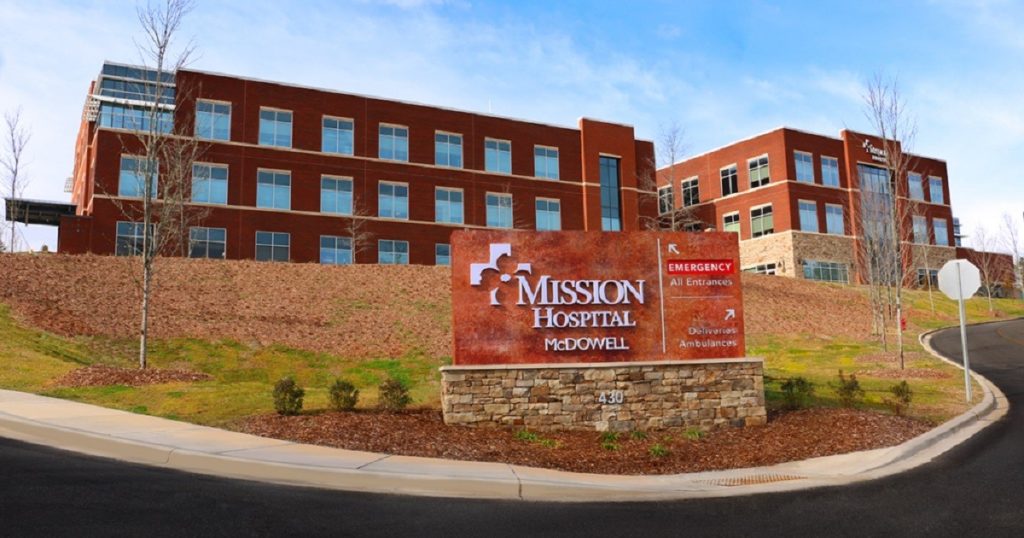 Mission Health, acquired by HCA in 2019, has 18 facilities across western N.C. controlling approximately 75% to 90% of the healthcare market there. Photo from www.missionhealth.org

A group of residents from western North Carolina filed a lawsuit Tuesday, Aug. 10, against HCA Healthcare and Mission Health alleging the anti-competitive business practices have driven medical prices up and the quality of health care down in that part of the state.

HCA is based in Nashville, Tennessee, and is the largest care provider network in the world. The group bought the non-profit Mission Health in 2019 for $1.5 billion, a deal approved by N.C. Attorney General John Stein, despite concerns at the time HCA would scale back access to care because it didn't have competition in the region.

Mission Health, now HCA, has a dominant market share with about 90% in Buncombe and Madison counties, and 70% to 75% in other western counties. Under current federal anti-trust laws, a monopoly is considered dominating more than 60% of the market share. 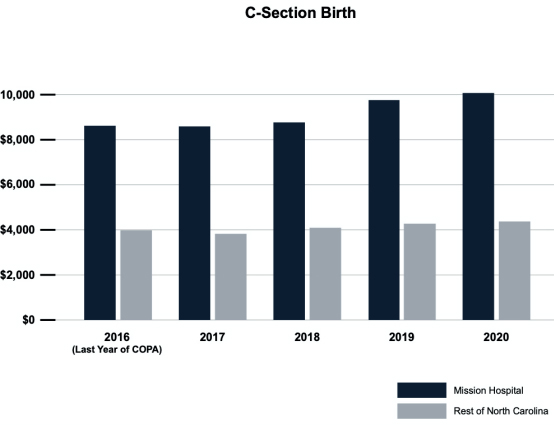 Graph filed with the lawsuit showing the cost of a C-section birth at HCA in western N.C. when compared to the cost in the rest of the state.
The plaintiffs, who have private insurance, are alleging the hospital system has been reducing care sites, staffing, and services while hiding behind contracts to shield prices from customers. They say the monopoly means many routine procedures, like c-sections, cost double the state average and drive up people's insurance premiums. For those on Medicare or Medicaid, the prices are three times that of other areas of the state, often resulting in big surprise medical bills.

"In the complaint, the plaintiffs allege that an out-of-state corporation has used its market power to cut quality and raise prices, harming doctors and consumers," said Mona Lisa Wallace of Wallace & Graham. "Mission Health was once the crown jewel of North Carolina's health care system. In filing this action, the plaintiffs seek to have HCA live up to its promises of providing quality affordable health care in Western North Carolina."

According to the filing, HCA reports revenue of $51 billion in 2020, with a net income of $37 billion. The lawsuit alleges HCA wanted to acquire Mission Health specifically for its lack of market competition and has continued to degrade services since the acquisition. The filing cites the N.C. Constitution as grounds for action.

Article 1, Section 34 of the constitution states: "Perpetuities and monopolies are contrary to the genius of a free state and shall not be allowed."

The Trump administration issued an Executive Order in 2019 requiring pricing transparency from hospitals with a civil penalty of up to $300 per day if they do not comply. The Biden administration continued that rule in 2020, increasing the penalty for larger facilities, but most hospitals have been electing to pay the penalty rather than reveal their prices.

"Rampant pricing opacity in health care purchasing due to the third-party payer system artificially inflates prices and largely leaves consumers out of the purchasing process," said Jordan Roberts, government affairs associate and health care policy analyst at the John Locke Foundation. "Patients can't shop for all medical care, but imposing price transparency requirements would inject some price information back into the market. Patients will regain some power over their health care purchasing, and hospitals will again have to compete for patients by providing superior services."

Health care pricing transparency has bcome a rallying point for lawmakers, the Department of Justice, and the Department of Health and Human Services. State Treasurer Dale Folwell is leading the charge in a years-long battle with hospitals as part of his responsibility to manage the $3.5 billion State Health Plan for more than 750,000 state employees and retirees. Folwell says that hospitals are withholding their pricing, even from the ones paying the bill. He said that for a state employee earning $40,000 per year, paying for their health insurance premiums costs one week's pay per month.

"The hospitals have boycotted those who teach, protect, or otherwise serve our state over this issue," said Folwell in an interview. "Despite being offered nearly 100% profit they've refused to become a clear pricer and want to maintain their secret contracts.... This is not a Democrat issue, or a Republican, a gender, or a race issue. This is about being on the right side of history."

Similar suits have been filed in recent years against HCA in Florida, Montana, California, and other states. Since this story was first published, Nancy Lindell, Mission Health/HCA Healthcare NC Division spokesperson responded to our request for comment saying,

"Once we have been served with the lawsuit, we will respond appropriately through the legal process," Lindell wrote. "We are committed to caring for Western North Carolina as demonstrated through more than $330 million in Charity Care and uninsured discounts we provided in 2020, expansion of hospital services including the opening of the North Tower, a new Pediatric ER, and securing land for a new 120-bed behavioral health hospital. Further, we have invested in our colleagues with onboarding nearly 1,200 new members this year and providing more than $3 million in student loan and tuition reimbursement in 2020. Mission Health is committed to the health and well-being of every person who comes to us for care and we are proud of our dedicated hospital teams that are facing the many challenges of this pandemic and the exceptional care they have provided to our patients."
Go Back