As push for masks surges, young Republicans take stand against mandates | Beaufort County Now | Climbing COVID-19 hospitalizations in North Carolina have energized the campaign for renewed mask mandates. The rules have also sparked protests from some who view it as a threat to personal liberty and dispute the efficacy of masking toward mitigating the spread of coronavirus.

Published: Friday, October 15th, 2021 @ 8:14 am
By: Carolina Journal   ( More Entries )
Publisher's Note: This post appears here courtesy of the Carolina Journal. The author of this post is Jeff Moore. 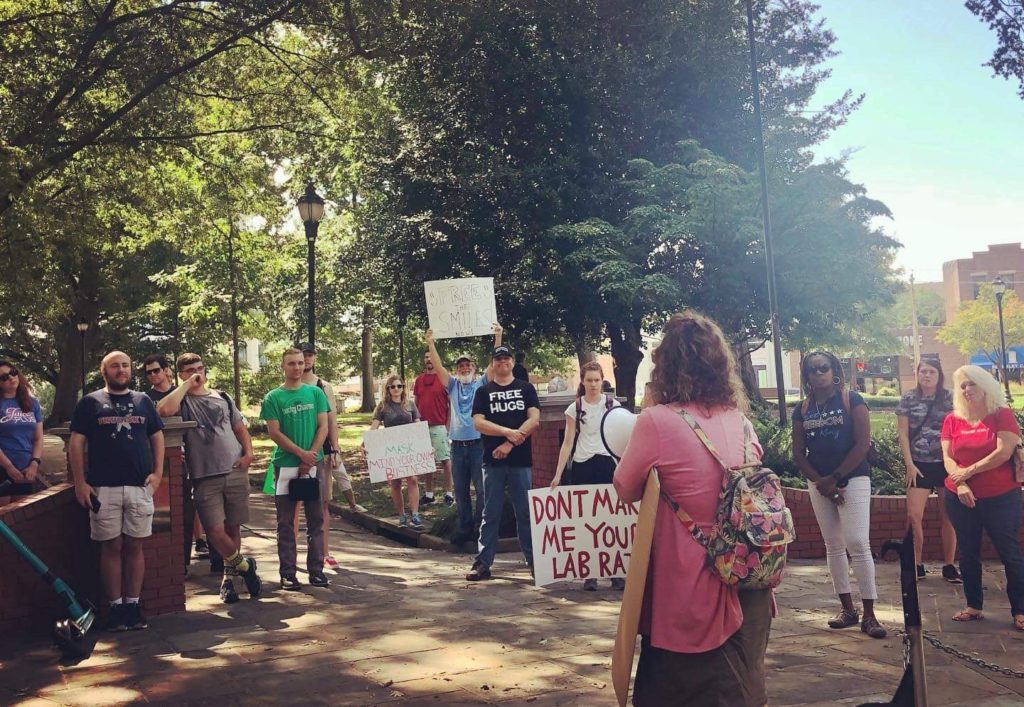 Climbing COVID-19 hospitalizations in North Carolina have energized the campaign for renewed mask mandates. The rules have also sparked protests from some who view it as a threat to personal liberty and dispute the efficacy of masking toward mitigating the spread of coronavirus.

A group of young liberty-minded Republicans from Wake County organized a protest of mask mandates in downtown Raleigh. The young Republicans were responding to the reintroduction of indoor mask mandates by the city, whose leaders cited spikes in COVID-19 in the decision to again require face coverings in all indoor spaces, regardless of vaccination status, and until further notice.

The capital city's mandate was a local manifestation of a national reversion to controversial COVID-19 mitigation policies in the face of the delta variant surge. What's more, breakthrough cases revealed the less-than-perfect protection of vaccines. As a result, the vaccinated are not even afforded the benefit of the doubt, despite a solid year of officials associating vaccination with 'getting your freedoms back.'

The latter wrinkle deepens Pauline Ashcraft's opposition to the mask mandates, even for those who are vaccinated. A member of the Wake County Young Republicans, Ashcraft says she attended the recent protest on the broad issue of personal freedom and worries the reintroduction of mask mandates indicates more severe mandates down the road.

"For me, it's not about the mask itself," Ashcraft told Carolina Journal. "While I do feel masks are unnecessary due to extremely low COVID-19 breakthrough rates for those that are vaccinated, as well as multiple studies that show the type of masks most people are wearing are not effective against the virus, for me it's about personal freedom. This type of action imposed by local government, with little to no data to support it, sets a dangerous precedent. How long after the mask mandate will we start to see vaccine mandates?"

Chairman of the Wake County Young Republicans, local small-business owner Charles Dingee was encouraged by the turnout for the protest. But he worries a tyranny of the majority in a Democratic-run county will drown out the voices of those sounding the alarm of overreach.

"Here in Wake County we have no elected Republicans on the county commission, and our concerns are not being heard," says Dingee. "We had a great turnout for this protest, and we will see what additional measures we can take to ensure our concerns are being heard by our elected officials."

Indeed, municipalities and school districts around the state are re-engaging mask mandates. In addition to Wake County, new mandates have taken effect in Mecklenburg, Durham, Orange, Cumberland, Guilford counties, and others, with an even wider distribution of mandates across school districts and college campuses.

A raucous protest erupted at a New Hanover County health board meeting Tuesday over a proposed county-wide mandate, with maskless protesters removed from the building and impassioned public comment against the policy. The board voted to adopt the mandate anyway, citing, like other local bodies, rising cases and hospitalizations.

Do masks even work?

The common justification begs the question: Can and will masks or mask mandates positively affect rates of transmission, and thus cases and hospitalizations? Besides the issue of personal freedom undergirding much of the opposition to mask mandates, this is the pivotal debate.

That is if it's even regarded as a debate. Local health boards, state health departments, the CDC, federal public health officials, most media reporting, and a great many Americans believe and maintain masks are proven effective at slowing the spread of the virus. Bringing back mandatory face-coverings, then, is a no-brainer in working to slow the virus, personal freedom concerns notwithstanding.

A significant minority, however, upon a review of the evidence, struggle to draw the same conclusions about the efficacy of masks in preventing the transmission of respiratory viruses. Jon Sanders, research editor and senior fellow for Regulatory Studies at John Locke Foundation, recently highlighted that evidence in questioning how much officials' actually rely on 'science and data' in making such decisions.

"Prior to Spring 2020, established research had demonstrated using randomized control trials (RCTs, the research gold standard) that face masks don't prevent infection from respiratory viruses," Sanders writes. "Since then, however, politicized science based on novel computer modeling and observational studies not accounting for biases and confounders and some even admitting they're to give the impression of a security they're not actually delivering has insisted that, no, actually, masks work this time."

None of the available studies seem to support the confidence in masks evoked by local officials in passing mask mandates, leading opponents to regard them as wholly arbitrary. Therein lies the rub for Matthew Cobb, who joined the protest over Raleigh's mask mandate. Cobb worries that, if such mandates can be enacted on - at best, shaky scientific grounds - how low is the bar for future, more severe restrictions?

"These arbitrary mask mandates set a dangerous precedent for the erosion of our liberty," Cobb told CJ. "With protection from the virus being available via the vaccine and no timetable or metrics being provided as to when the mask mandates will end, we're left to conclude the only basis for these restrictions is merely the level of fear in our public officials. Being forced to wear a mask may seem like a small restriction to some, but if we don't speak up now we virtually guarantee that, eventually, further restrictions on our freedom will be enacted for similarly arbitrary reasons."
Go Back