Evidence emerges that the White House colluded with the National School Board Assoc. to suppress parental involvement | Beaufort County Now | They are trying to stifle parental expression of concerns about CRT

Evidence emerges that the White House colluded with the National School Board Assoc. to suppress parental involvement 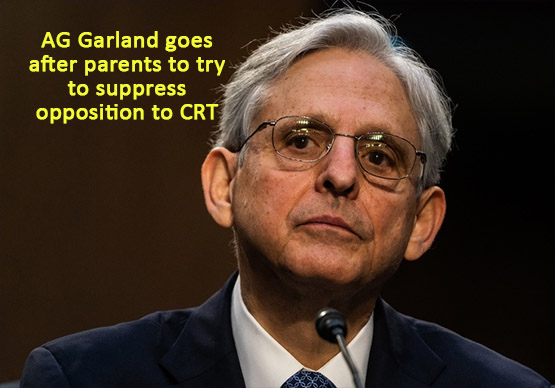 The Washington Free Beacon is reporting:

The country's largest school board association collaborated with the Biden White House before sending a controversial letter calling on the FBI to investigate parents as potential domestic terrorists, according to previously unreported emails.

The emails, obtained by Parents Defending Education through public records requests and reviewed by the Washington Free Beacon, reveal that the National School Board Association's president and CEO sent the letter to Biden on Sept. 29 without approval from the organization's board. The letter said that the acts of some parents at school board meetings across the country could be considered "a form of domestic terrorism and hate crimes."

The emails also show that the White House asked the association for examples of threats against school board members days before Attorney General Merrick Garland created a task force of officials from the FBI and the Justice Department to determine how to prosecute alleged crimes at school board meetings.

The letter makes clear that the White House was aware of the letter before it was released, while raising questions about whether the White House colluded with the association on the letter to prompt federal action. The letter has sparked allegations that the Biden administration is trying to stifle dissent among parents who oppose mask mandates and the teaching of critical race theory at America's schools. School board meetings have become battlegrounds for factions of parents torn on those issues. Parents in some districts have organized recall efforts to remove school board members who support mandates or radical curricula.

The emails also show that members of the National School Board Association's board of directors voiced frustration that officials sent out the letter without their approval.

One director at the association said that the letter had "reawakened hostilities" that were just beginning to subside.

"Many of us have been put in a position now of explaining or defending this action of our association as we are asked by members of our community if we consider them domestic terrorists for showing up to our meetings and expressing their opinions," John W. Halkias, a director from the association's Central Region, wrote on Oct. 1.

Halkias said that he and other board members would not have likely approved the letter, which he said "used terms that were extreme, and asked for action by the Federal Government that many of us would not request."

Viola Garcia, the president of the association, and Chip Slaven, the CEO, disclosed in other emails to the board that they had been in consultation with the White House and the Department of Education regarding an alleged rise in cases of irate parents showing up to school board meetings.

Slaven wrote on Sept. 29 that he and Garcia sent their letter to Biden "concerning threats to public schools and school board members." He said that "in talks over the last several weeks with White House staff," the administration had "requested additional information on some of the specific threats."

"So the letter also details many of the incidents that have been occurring," Slaven wrote.

Garcia wrote in an email to the board on Oct. 2 that the association had been engaged with the White House and Education Department "for several weeks" on the school board protests.

"We felt compelled to say something when we started hearing about the threats, harassment, and acts of intimidation at school board meetings," she wrote.

Garcia and Slaven did not respond to requests for comment.

You can read the NSBA’s letter at:  https://freebeacon.com/campus/white-house-knew-about-letter-that-compared-parents-to-domestic-terrorists/